The pandemic-driven downturn in the oil and gas industry is threatening the global floater fleet which could see up...
Read more
OilNOW
OilNow is an online-based Information and Resource Centre which serves to complement the work of all stakeholders in the oil and gas sector in Guyana.

South America’s newest oil producer, Guyana, is one step closer to hiring a firm to market its share of Liza Crude.

The Department of Energy (DE) had issued an invitation for Expression of Interest in February 2020 which saw 34 companies responding including several oil majors and commodities traders.

In a press update on Friday, DE said a five-member Evaluation Committee was formed tasked with producing a Shortlist of Companies after a detailed check of each Firm’s Expression of Interest for general and technical data in relation to qualifications and experience pertinent to the assignment at hand, and as was required to be submitted in the request for Expression of Interest.

“This activity has now been completed successfully and the Shortlist of Companies, 19 in total, will progress at the next phase of the procurement process and exclusively and at the same time, receive the Request for Proposal (RFP),” DE said.

The successful completion of the next phase in this process will see the appointment of a marketing partner for lifting the Liza Crude.

Shell Western Supply and Trading Limited was hired to lift the country’s first three 1-million-barrel oil cargoes, two of which have already been sold with a total of approximately 3 more lifts remaining for 2020.

The new contract with the successful company would be for 12 months and involve five lifts of some 1 million barrels each over that period.

Projected lifting costs for Liza partners will be just over $10 per barrel for the full year, according to Ruaraidh Montgomery, director of research at Houston-based consultancy Welligence.

Guyana began producing oil at the Liza Phase 1 Development in the ExxonMobil-operated Stabroek Bock in December 2019. 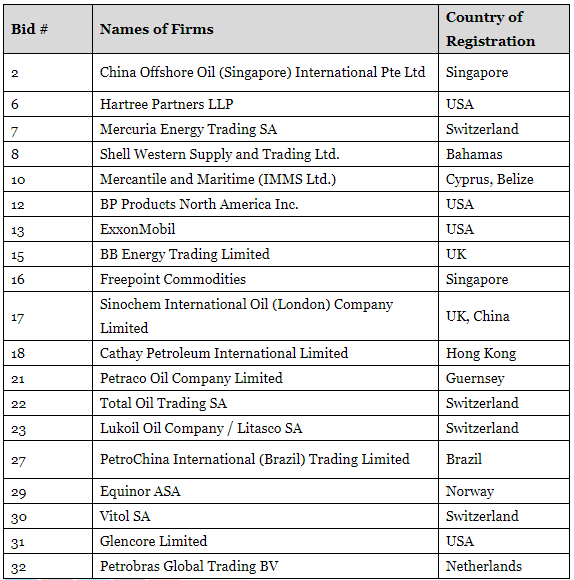 2019 was ‘most successful year’ for discoveries; Guyana added big volumes...