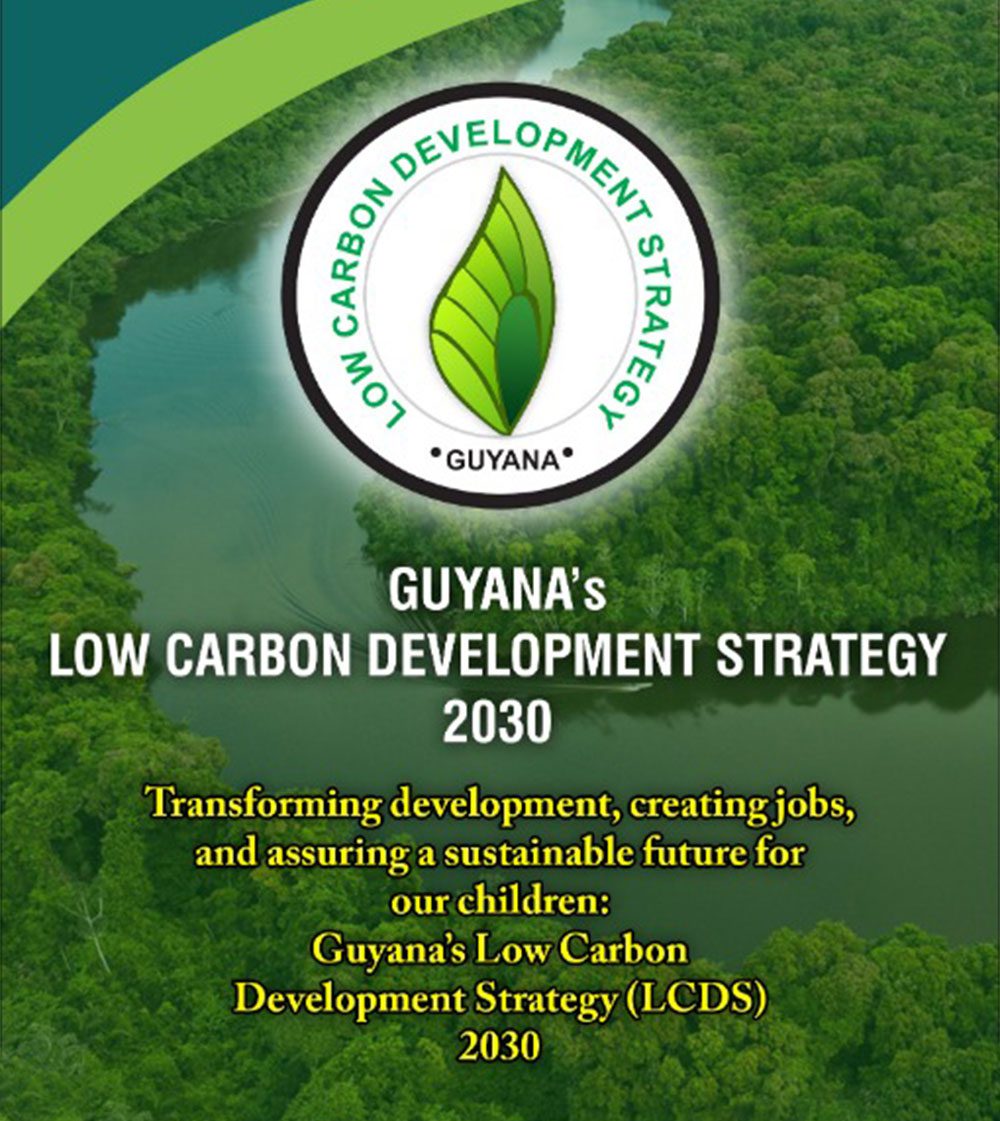 Low Carbon Development Strategy 2030 is an expanded strategy for Guyana’s sustainable development in the decade through 2030. It builds on the first LCDS which was launched by former President Dr. Bharrat Jagdeo in 2009.

While ExxonMobil has since discovered considerable oil and gas deposits offshore, with Government outlining aggressive production targets, President Dr. Mohamed Irfaan Ali means for the industry to develop, not against the grain of LCDS 2030, but in the most sustainable manner. Guyana’s petroleum industry will not only honour the spirit of LCDS, but will provide the framework for Guyana to pursue its energy transition. Critically, the industry will provide the revenues to help Guyana provide a world class standard of living for its citizens, while pursuing climate adaptation and mitigation.

After a period of extensive consultation which concluded early 2022, the strategy was finalised, debated and ratified by the National Assembly of Guyana.

The Architecture for REDD+ Transactions (ART) has issued the world’s first TREES credits to Guyana, it announced Thursday. It said this marks a milestone, making...

Is Guyana ready to go electric?

The first photo to hit Facebook was of the vehicle being lifted off a ship and onto a wharf in Georgetown – a sleek,...
Read more

Guyana’s infrastructure boom will see urban settlements undergoing significant expansion over the years. But what does this mean for the country’s carbon footprint? According to...
Read more

With the goal of stimulating growth with clean energy and low-carbon technologies, Guyana is encouraging investments in low-emission cars and renewable energy sources with...
Read more

With Guyana’s oil revenues projected to peak at US$16B in 2036, President, Irfaan Ali has said that a significant portion of these profits will...
Read more

Though Guyana’s super basin is projected to reap US$157B in oil earnings by 2040, authorities are determined to ensure a portion of these resources...
Read more

In the move to generate as much revenue as it can to adapt to the changing climate and mitigate against its effects, Guyana plans to gain...
Read more

Guyana’s Low Carbon Development Strategy (LCDS) 2030 considers the implications of the changing climate on every sector, including public health. Government’s health policy under its...
Read more

Being among the best natural carbon capture agents in the world, mangroves are an invaluable tool for any government in its quest to reduce...
Read more

When Guyana first earned money for the conservation of its forests, it was determined to make sure the proceeds promote the same climate consciousness...
Read more

Norway’s Minister of Climate and the Environment, Espen Barth Eide said he is impressed by Guyana’s continued leadership on rainforest conservation, during an important contract...
Read more

As efforts continue with the implementation of the Guyana Utility Scale Solar Photovoltaic Programme (GUYSOL), the country is poised for a transformational leap towards decarbonisation, says...
Read more

Guyana expects windfall revenues from the sale of its crude this decade as ExxonMobil looks to add one new oil production vessel almost every...
Read more

Guyana is on an upward trek in its developmental journey, and the government’s Low Carbon Development Strategy (LCDS) 2030 aims to make sure this...
Read more

With the direction the world is heading, investing in an electric vehicle (EV) is becoming the more cost-effective and environmentally-friendly choice. And if the skyrocketing fuel prices do not...
Read more

Today, Guyana joins the globe in celebrating World Environment Day 2022. This year’s campaign “Only One Earth” calls for collective, transformative action on a global...
Read more