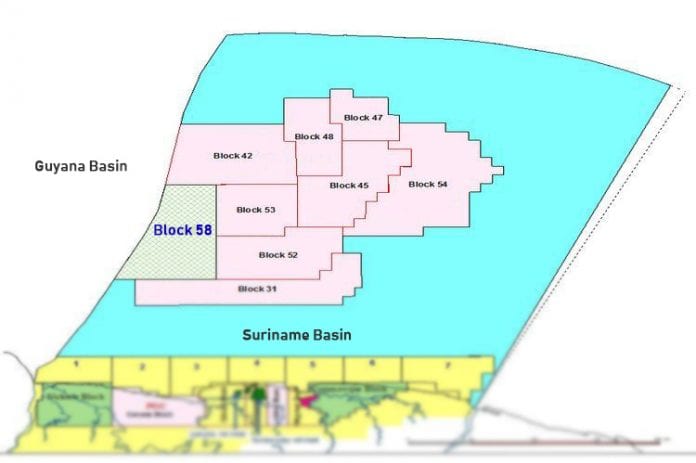 Houston-based Apache Corporation is set to spud its first well offshore Suriname by mid-year in Block 58 which sits adjacent to sections of the prolific Stabroek Block where ExxonMobil has found more than 5.5 billion barrels of oil equivalent.

Apache has completed a substantial geologic and geophysical evaluation of Block 58 and has identified numerous, large, drill-ready prospects across multiple different play concepts.

The company has already contracted a drillship for the foray offshore the Dutch-speaking South American country.

ExxonMobil announced its 11th and 12th discoveries – Tilapia and Haimara – in the Stabroek Block in February, bringing its total discoveries in Guyana to 12. The Haimara-1 well, encountered approximately 207 feet (63 metres) of high-quality gas condensate-bearing sandstone reservoir and was drilled to a depth of 18,289 feet (5,575 metres) in 4,590 feet (1,399 metres) of water.

Haimara is located at the south eastern end of the 6.6 million acres Stabroek Block and is the closest point to Block 58, for which a discovery has been made.