OilNOWLatest News and Information from the Oil and Gas sector in Guyana
More
FeaturedNews
Updated: May 31, 2020

Large institutional investors decreased their net holdings in many of the world’s largest integrated oil and gas majors in the first three months of the year as measures to curb the spread of COVID-19 crushed petroleum demand, crashed oil prices and deflated market value for a long list of energy companies, S&P Global Market Intelligence said in a report on Friday.

However, that trend was bucked by some investors that entered the sector with the hopes of cashing in on the eventual recovery in oil prices. 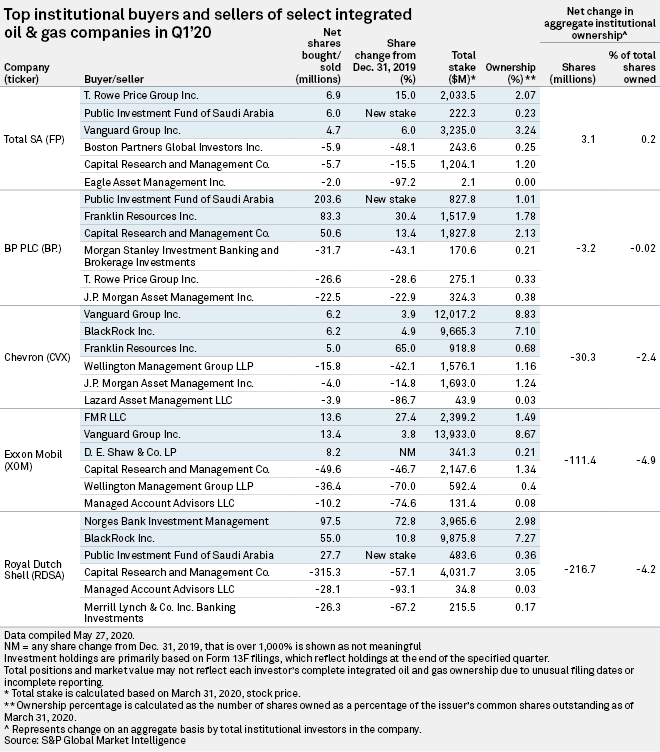 The first-quarter earnings season was brutal for the integrated oil and gas majors, who have all announced cuts to capital expenditures and operating expenses to protect their bottom lines.

Shell took the market by surprise, cutting its dividend for the first time since World War II as oil prices plunged in response to a supply glut and demand destruction caused by shelter-in-place orders around the globe due to COVID-19.

To address the epic oil price crash, Exxon and Chevron, which had one of the strongest balance sheets of the majors heading into the quarter, are both reining in upstream production around the world, including in one of the world’s hottest oil plays — the U.S. Permian Basin.