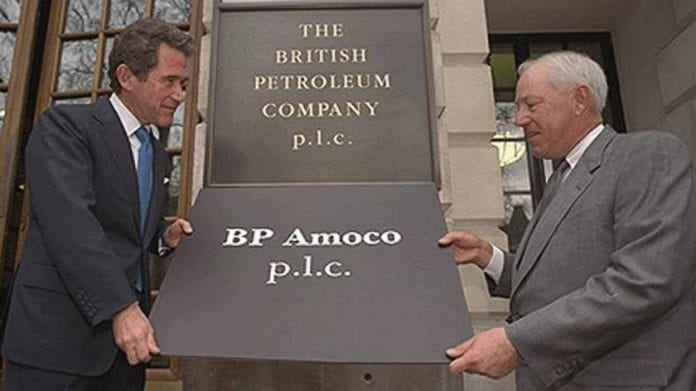 Saturday, August 11 marked 20 years since British Petroleum plc announced that it would acquire the American oil giant Amoco. The deal was huge, marking the largest industrial merger at the time and the largest foreign takeover in the US.

The $48.2 billion deal was the precursor for further consolidation of the oil industry in the early 2000s, including mergers between Exxon and Mobil, Chevron and Texaco, Total, Fina and Elf, and Conoco and Phillips.

It was arguably the most transformative change in BP’s history. The nine-page press release issued at the time said the BP-Amoco deal would create “the strongest and most competitive international energy and petrochemicals group in the world.”

Since the deal, BP has continued to boost its US presence, buying ARCO in 2000 and, just last month, purchasing $10.5bn un-conventional gas assets from BHP.

The architect of the merger, Lord Browne (BP Chief Executive 1995 – 2007) described how the deal originated in a telephone call with Amoco Chairman and Chief Executive Larry Fuller. The two decided to meet the next day, straight after Lord Browne’s Concorde flight from London.

Lord Browne later described the ‘mega-merger’ as his “career high” and in acquiring Amoco, BP gained 9,300 fuel stations as well as five refineries that produced 1m barrels a day.

Just last year BP brought back the Amoco brand as part of the company’s long-term strategy to grow its fuel and convenience business in the US.

BP: The rise of the robots