OilNOWLatest News and Information from the Oil and Gas sector in Guyana
More
ExplorationFeaturedNews
Updated: February 1, 2022

After more than 20 years of seismic data acquisition and drilling, CGX Energy Inc. has finally landed its first oil discovery in Guyana at the Kawa-1 well on the Corentyne Block which appears to rival some of the notable discoveries at the neighbouring Stabroek Block.

CGX and partner Frontera Energy Corporation said on Monday the Kawa-1 well was drilled to a depth of 21,578 feet (6,578 metres) on the northern section of the block and encountered approximately 177 feet (54 metres) of hydrocarbon-bearing reservoirs within Maastrichtian, Campanian and Santonian horizons based on initial evaluation of Logging While Drilling (LWD) data.

For a comparison, ExxonMobil’s Whiptail-2 well announced in July 2021 had encountered 167 feet of hydrocarbon-bearing reservoirs while Hammerhead, announced in August 2018, had encountered 197 feet of hydrocarbon-bearing reservoirs. Both were said to be significant discoveries with potential for standalone development. With gross pay at Kawa-1 falling right in the middle of these two discoveries, CGX and Frontera seem to have finally hit the jackpot.

The partners said the intervals at Kawa-1 are similar in age and can be correlated using regional seismic data to recent successes in Block 58 in Suriname and the Stabroek Block in Guyana. They said too that Kawa-1 also encountered hydrocarbon-bearing sands in deeper strata (Coniacian or older). The companies said this will be analyzed and could become the target of future appraisal opportunities.

Further to this, CGX and Frontera said the net pay and fluid properties of the hydrocarbons across the shallow and deep reservoirs will now be confirmed with electric wireline logging and fluid sampling, with results to be disclosed as soon as practicable.

Both disclosed that the Kawa-1 results support the geological and geophysical models used while noting that they have helped de-risk equivalent targets in other parts of the Corentyne license area. The end of well forecast is currently projected to be the end of February 2022. 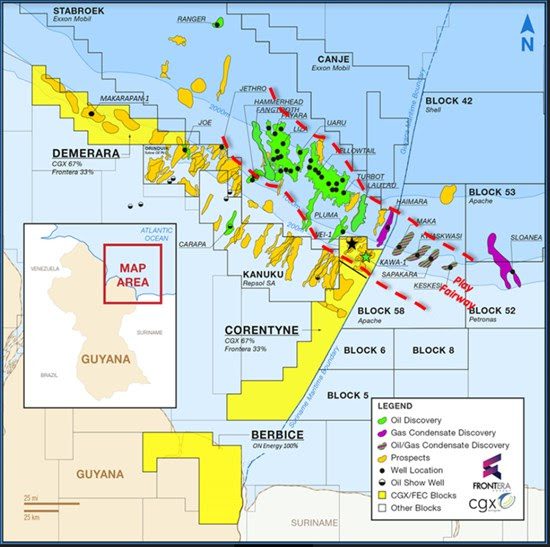 OilNOW understands that information on final well cost estimates and additional results will be announced upon completion of end of well activities. CGX also said it is currently assessing several strategic opportunities to obtain additional financing to meet the costs of the drilling programme.

Professor Suresh Narine, Executive Co-Chairman of CGX’s Board of Directors, commented that the results from the Kawa-1 well represent a positive milestone in the CGX journey as a pioneer oil and gas explorer in the Guyana Basin.

“Together with our partner Frontera, CGX looks forward to continuing our socially and environmentally conscious approach to the development of Guyana’s oil and gas industry and port infrastructure,” expressed the Co-Chairman. “We are proud of our long partnership with the Government and People of Guyana and of our reputation as Guyana’s Indigenous Oil Company.”

Significantly, the partners are now eager to build on their recent offshore positive results at the Kawa-1 exploration well, with plans moving apace to spud its second commitment well, called Wei-1, in the northwestern part of the Corentyne block in the second half of 2022.

The Maersk Discoverer semi-submersible mobile drilling rig will be used for this exercise.

The Wei-1 exploration well will target Campanian and Santonian aged stacked channels in the western fan complex in the northern section of the Corentyne block.

The partners disclosed that the Wei-1 well is named after one of the tallest peaks in the Pakaraima mountain range, which has commanding visibility over the surrounding terrain. Wei Tepu was historically used as a sentinel post by the Patamona People to guard against attacks.

Since 1997, CGX has been an active explorer both onshore and offshore Guyana. in June 2000, the Canadian exploration company commenced drilling operations offshore at the Eagle-1 well. Those works came to a halt after Surinamese naval gunboats forced a jack-up rig to remove from the well site. Legal proceedings were initiated at the International Tribunal on the Law of the Sea (ITLOS) to resolve the maritime border dispute with Suriname and in 2007, the Tribunal awarded Guyana at least 93% of the disputed area.

Another well – Jaguar-1 – was drilled in February 2012 on the Georgetown block but was subsequently abandoned due to safety concerns. Eagle-1 was drilled months later, but the results were disappointing.