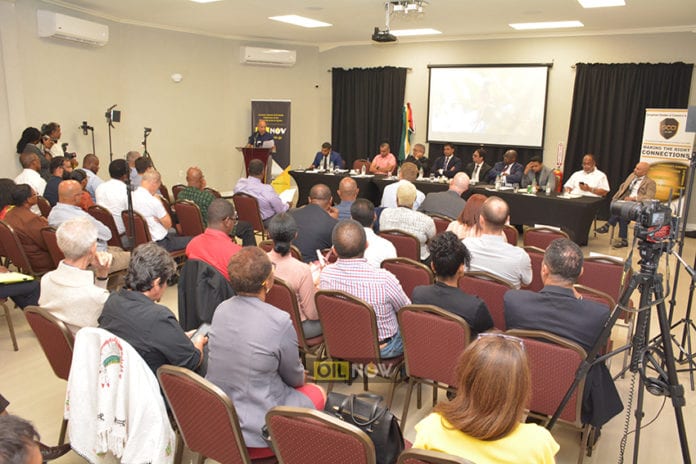 Members of the business community, the public and key stakeholders turned out in large numbers to the first open forum on Guyana’s 3rd draft Local Content Policy (LCP) organised by the Georgetown Chamber of Commerce and Industry (GCCI) with support from OilNOW. The event was held on Wednesday evening in the country’s capital, Georgetown.

The forum got underway with a presentation on the draft LCP by GCCI’s Executive Director, Richard Rambarran who provided an overview of the document, with focus on the structure, policy objectives and key points.

Ramson Jr. in his remarks pointed out that capacity training and development is the only way that Guyanese will be able to secure long term benefits from oil and gas.

Professor Lucas stated that many of the benefits of local content will be experienced years down the road and the LCP should be geared towards providing the competencies and capabilities that can feed into the country’s Green State Development Strategy (GSDS).

Indar endorsed the third draft as a step-up from the previous versions but indicated key shortcomings in the document still exist that could potentially diminish the ability of Guyanese to benefit. He related that for local companies to break into the industry, it sometimes requires forming partnerships with other companies that have experience in the industry. However, he is wary of ‘shop front’ set ups. This is where the local company has 51 percent of a business, he said, but they’re not really the owner of the business. The test of locality of a business, he added, needs to have four elements.

He believes that to qualify as a local company, the company’s head office needs to be located in Guyana, the majority of the employees need to be based in Guyana, and the taxes need to be paid in Guyana. He added that there ought to be policies to prevent certain foreign companies that offer services made available by local companies from entering the Guyana market.

Dr. Adams pointed out that one of the key elements missing from the draft LCP is penalisation for non-compliance to the policy.

Dookhoo pointed out that Local Content Legislation is anti-competitive and flies in the face of World Trade Organisation rules and competition laws. He said over the years, Governments have tried to give at least 20% of contracts to small businesses and have failed. He suggested making specific provisions in the policy for small businesses that would enable them to benefit from opportunities in the industry.

Persaud lamented the protracted period that has surrounded the delivery of an LCP, and the failure to implement a policy to date. He said the policy should be linked to a national development strategy and not the GSDS, as suggested by Professor Lucas.

Ally said the defining parameters for Guyana’s LCP framework aligns well with the globally accepted standards for local content plans in the oil and gas sector. He said he is pleased that the LCP shall be commensurate with the stage of investment since the different stages of oil and gas activities involve varying levels of expertise.

Khan warned of the unintentional consequences of the oil and gas industry and LCP. He said the movement of human capital from other sectors to oil and gas will result in a gap in the supply of goods and services in the other sectors which will then result in an increase in prices for those goods and services as consumers will likely have to rely on imported products.

Boyer stated that an LCP can really ‘kick off’ a new wave of industrialisation in Guyana. The country, he said, has to recognise that it is behind in certain areas of development. He highlighted the lack of penalties for non-compliance to the policy while stating that Guyana’s current trade policies “have left the country open to shell corporations registered by Caricom nationals” that it is very hard to guard against. “We need a purely technocratic body set up to manage oil revenues and implementation of local content policies,” the GCCI President stated.

A number of issues were raised in the question and answer period by attendees including the need for a depletion policy, enforcement mechanism in the LCP and measures to allow small businesses to benefit from oil and gas opportunities.

Consultations are currently ongoing on the 3rd draft LCP after which the Department of Energy will study recommendations made with a view to finalising the document for implementation before first oil, just months away.