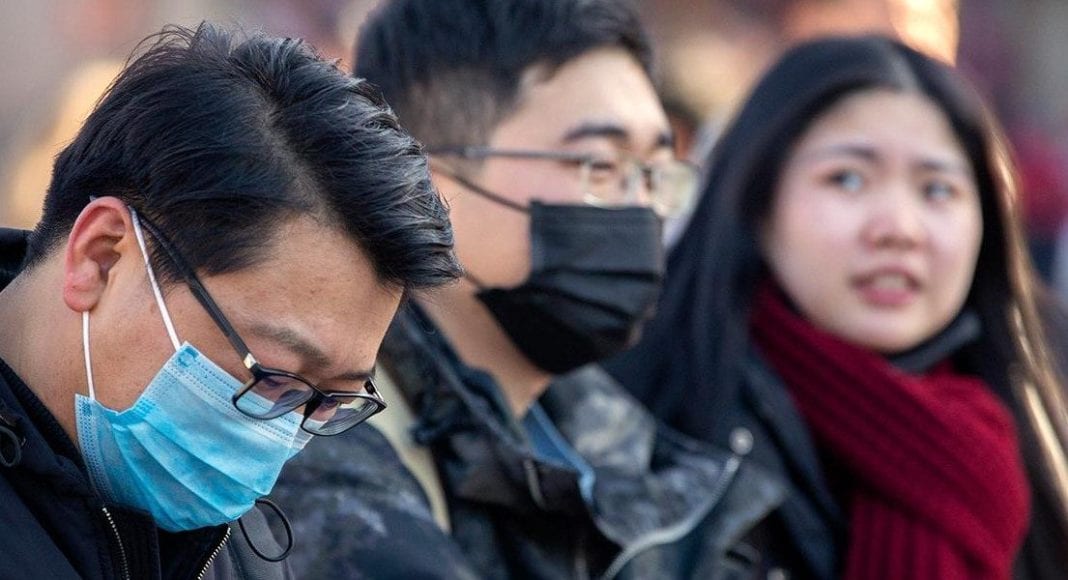 Baker Hughes said on Friday an order has been confirmed with Petrobras to provide a suite of digital solutions...
Read more

Guyana’s Minister of Foreign Affairs, Hugh Todd, on Monday transferred a protest note to the Venezuelan government over an...
Read more
OilNOW
OilNow is an online-based Information and Resource Centre which serves to complement the work of all stakeholders in the oil and gas sector in Guyana.

The coronavirus epidemic in China is expected to have a significant impact on global oil demand growth in coming months, according to a new report from Rystad Energy.

The virus has triggered restrictions in the country’s public transport and air travel, both at a domestic and an international level, reducing demand for oil, which has lost about a fifth of its value since the start of the year.

What does that mean for the world’s 2020 oil demand?

Assessing the impact of the virus, Rystad Energy is heavily revising its annual global oil demand growth forecast down by 25% to 820,000 barrels per day (bpd) in 2020.

Rystad Energy said in a report on Tuesday that its previous growth forecast, published in December, before the coronavirus outbreak, stood at 1.1 million bpd. The coronavirus’ impact on demand growth could be even wider, however, slashing growth to as low as 650,000 bpd year on year (y/y) in the Norway-based energy research and business intelligence company’s worst-case scenario.

“Our current assessment implies that the impact of coronavirus will persist throughout all of February and March and will then gradually subside towards June 2020.  We hence expect travel restrictions and extended holidays in China to significantly impair demand in 1Q20 and partially in 2Q20. Demand is forecast to start recovering in April and May,” said Bjornar Tonhaugen, Rystad Energy’s Senior Vice President, Head of Oil Markets.

What does that mean quarterly?

Rystad Energy now believes that the projected global oil demand growth in the first quarter will be almost entirely wiped out. The company said its estimates show that demand will grow by only 0.1 million bpd, a steep decline from a previously projected y/y growth of 1.2 million bpd for 1Q20.

Of the above, 0.9 million bpd of the growth’s decline is attributed to lower demand in China and 0.2 million bpd to the rest of the world. “Overall, we expect Chinese demand to drop in 1Q20 by 0.3 million bpd y/y, instead of growing by a previously projected 0.6 million bpd. This will be the first quarterly y/y drop in seven years,” Rysatd Energy said.

“We see an additional downside risk to short-term oil demand growth also from a macro-economic perspective as we continue to see weak economic indicators from India – one of the main engines of demand growth – along with weak European manufacturing PMIs. Consensus GDP forecasts have recently put Indian GDP growth at just 5% this year, 0.5 percentage points lower than in the previous forecast. European manufacturing PMIs remain at 46, well below the inflection point of 50,” Rystad Energy stated.

China to take the biggest hit

Chinese oil demand accounted for 13% of the global total in 2019, standing at 13.6 million bpd. Before the coronavirus outbreak, we expected Chinese demand to grow by 400,000 bpd this year, including a 100,000-bpd y/y growth in jet fuel demand.

Rystad Energy said it has now reduced its forecast for Chinese demand growth to 230,000 bpd this year, and its expects the largest negative impact to be seen in demand for jet fuel. Rystad Energy’s data show that Chinese jet fuel demand fell by 30% in January and could potentially decline by 60% in February and March.

China’s travel restrictions have come at a time that would normally mark a seasonal increase in air and long-distance bus journeys, as hundreds of millions of people typically travel during Chinese Lunar New Year. This means that a fraction of oil demand this year will be lost indefinitely. 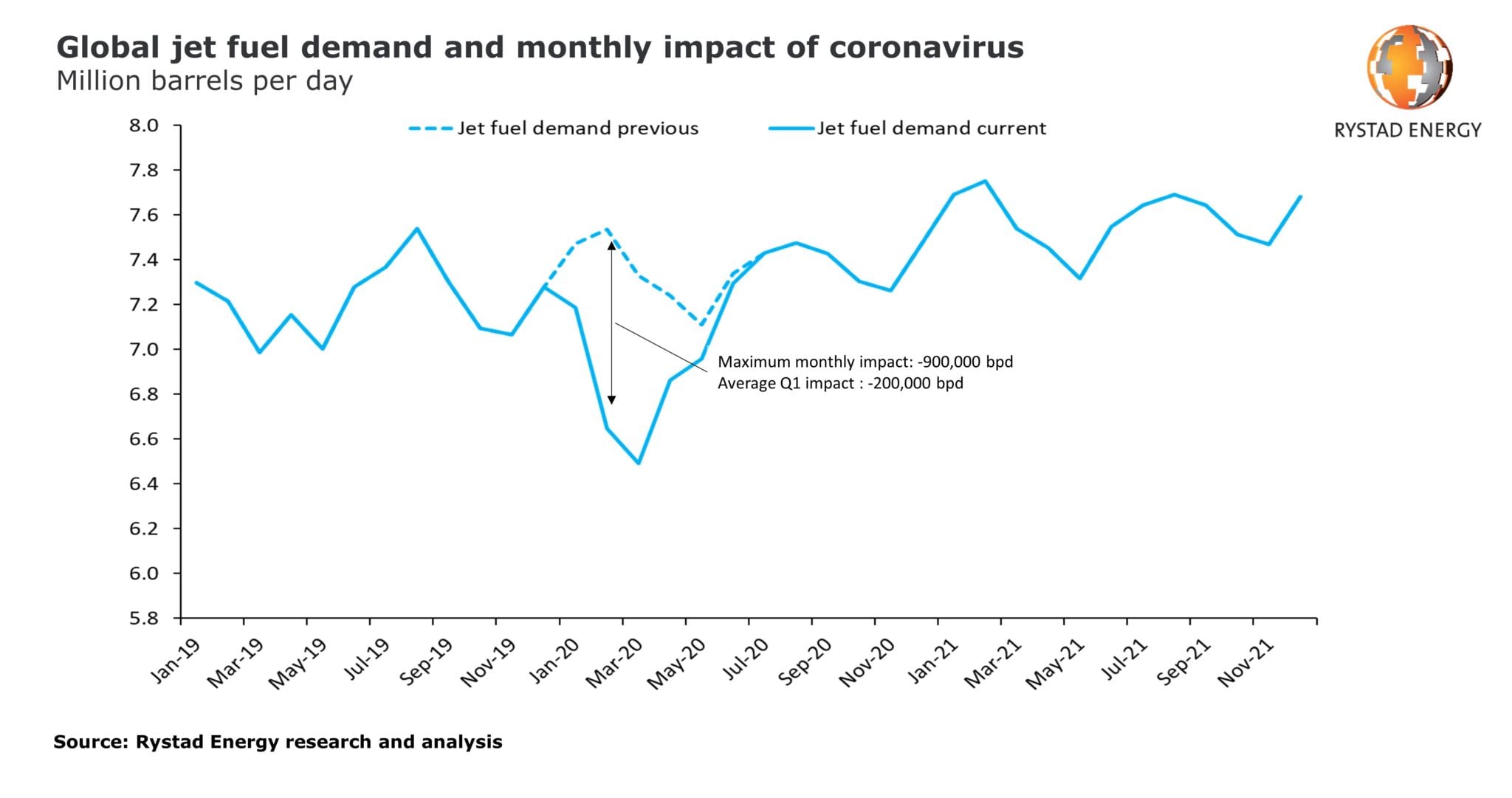 Viruses – like hurricanes, economic crises and armed conflicts – are ad hoc events that can significantly impair oil demand. The SARS virus, which originated in China around the same time of the year back in 2003, is believed to have eliminated all of the growth of global jet fuel demand for that year, which had been forecast at about 200,000 bpd.

China’s oil demand has now more than doubled since 2003. The country accounts for 14% of global air passengers carried and around 13% of global trade in goods, which is why the impact of a similar virus outbreak as SARS will likely be even greater now. “Moreover, the death toll from the coronavirus reported this weekend has already surpassed that of SARS in 2003, and we see a risk that the coronavirus impact may be understated,” Rysatd Energy pointed out.

At their peak in February and March, both Chinese and international air restrictions could reduce global jet fuel demand by 900,000 bpd in relation to Rystad Energy’s pre-coronavirus expected growth levels.

Baker Hughes said on Friday an order has been confirmed with Petrobras to provide a suite of digital solutions...
Read more
News

Guyana’s Minister of Foreign Affairs, Hugh Todd, on Monday transferred a protest note to the Venezuelan government over an incident that occurred on January...
Read more
News

The Liza Destiny Floating Production Storage and Offloading (FPSO) vessel which is producing oil offshore the South American country of Guyana is among the...
Read more
News

Guyana accounts for US$15 billion in deepwater sanctioning since 2019

Global consultancy group Wood Mackenzie says it expects another year of around US$300 billion in upstream development spend, down 30% on pre-crisis levels and...
Read more

Baker Hughes said on Friday an order has been confirmed with Petrobras to provide a suite of digital solutions across the state oil company’s...
Read more

Guyana’s Minister of Foreign Affairs, Hugh Todd, on Monday transferred a protest note to the Venezuelan government over an incident that occurred on January...
Read more

The Liza Destiny Floating Production Storage and Offloading (FPSO) vessel which is producing oil offshore the South American country of Guyana is among the...
Read more

40% of offshore investments from 2021 will be FPSOs, several orders...