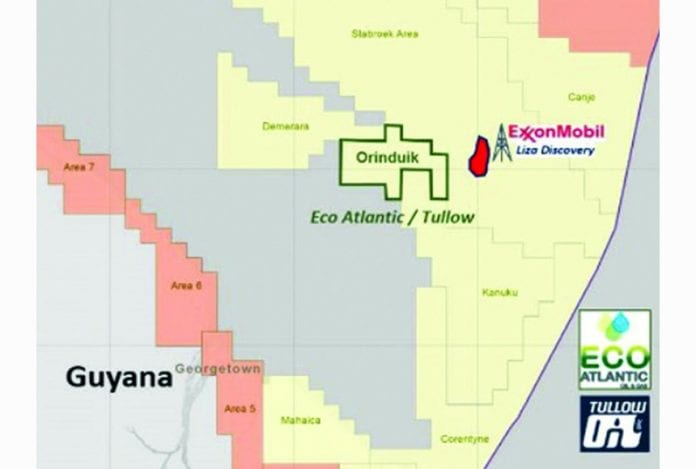 (Reuters) – A prospect operated by Tullow Oil off Guyana contains an estimated 3 billion barrels of oil and gas, its partner Eco Atlantic said on Tuesday, as the two firms prepare to drill in the Latin American oil basin.

Guyana became one of the world’s most closely watched oil basins after ExxonMobil discovered more than 4 billion barrels of oil equivalent in its Stabroek licence in recent years.

In a resource study, known as the competent person’s report (CPR), Eco Atlantic said the Orinduik block is estimated to contain a resource of around 2.9 billion barrels of oil and gas equivalent in 10 large prospects.

Those include close to 2.5 billion barrels of recoverable oil and 2.45 trillion cubic feet of associated gas.

“Data gathered at the Latuk Lead on the Orinduik Blocks bears great similarities to the Hammerhead discovery and shares many of the same channel characteristics,” Eco Chief Executive Officer Gil Holzman told Reuters.

Tullow owns 60 percent and Eco Atlantic Oil and Gas 40 percent in Orinduik. France’s Total has an option to buy 25 percent from Eco for $12.5 million.

Tullow plans to begin drilling in the block in the third quarter of 2019, with Eco indicating it will begin “early” in the quarter.

“Since last year, Eco has been cooperating closely with Total and we are confident that they will be exercising their farm-in option” once they receive the full data from the study, Holzman said.

Total will have up to 120 days to exercise the option.

Tullow and Total did not respond to requests for immediate comment.

Guyana today has little to no oil infrastructure but is expected to become one of the world’s busiest hubs in the coming years as producers begin drilling and producing there.