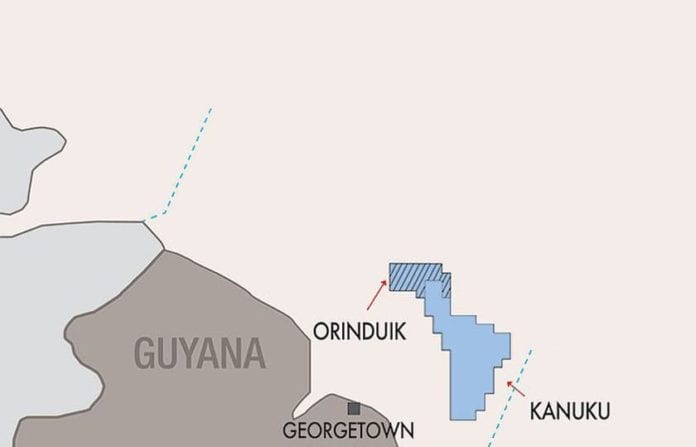 Eco (Atlantic) Oil & Gas Ltd. believes the recently announced Carapa-1 oil find by Tullow Oil in the Kanuku Block offshore Guyana, though lower than previously estimated, is still an important discovery as it confirms the prospectivity of the Orinduik Block.

Carapa-1, announced on Thursday, encountered approximately four metres of net oil pay based on preliminary interpretation. Preliminary results of drilling, wireline logging, pressure testing and sampling of reservoir fluid indicated the discovery of oil in upper cretaceous age sandstone reservoirs and testing indicated that the oil is 27 degrees API, with a sulphur content of less than 1%.

Colin Kinley, Chief Operating Officer of Eco Atlantic said, “The Carapa discovery is very important to us technically and confirms our thinking on prospectivity on our Orinduik block. The existence of a good oil grade unaffected by sulphur in board of us is excellent news. We have a proven source kitchen to the North, with ExxonMobil and partners having defined and now producing 32 API at the Liza field to the North of us, and now a 27 API oil discovery on Carapa to the South of us.”

Kinley said they continue to gain a good understanding of the transportation and pooling systems, and they can see the reservoirs clearly in the cretaceous. “As more wells are drilled, it is becoming clearer to understand and define new drilling locations. We see very significant thick pay opportunities in the cretaceous section on Orinduik and we are currently defining our upcoming drilling plans, which we hope to have confirmed in the next few weeks.”

He said Eco Atlantic is currently preparing an updated Competent Person’s Report (CPR) under industry guidelines, “which will incorporate the recent discoveries in the Tertiary Section on Orinduik, ExxonMobil’s additional regional discoveries in 2019 and some of the read through we see by the derisking of the cretaceous section, which is estimated to contain close to 3 Billion Barrels of oil on the Orinduik Block, that the Carapa discovery has helped define.”

Kinley said 2020 is a significant year for Eco, and the discovery at Carapa is exactly what the company was looking for. “We now have drilling prospects that are significantly brightened, and we will provide further updates regarding the CPR, analysis of our discoveries to date and upcoming drilling plans soon,” he said.

Tullow and its joint venture partners made two other discoveries offshore Guyana in 2019 – at the Joe-1 and Jethro 1 wells, both in the Orinduik block.