OilNOWLatest News and Information from the Oil and Gas sector in Guyana
More
FeaturedNews
Updated: February 22, 2021

Encouraged by Guyana discoveries, Staatsolie pushed to increase its participation in deepwater play 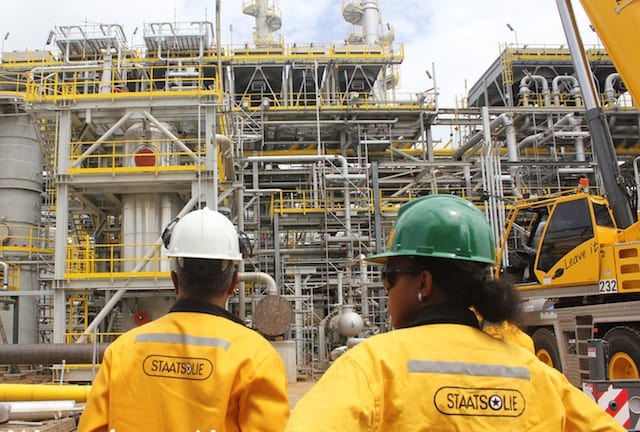 Suriname, through its state oil company, Staatsolie, pushed to increase its participation in offshore exploration and production activities following a string of massive oil finds made by its CARICOM sister, Guyana, since 2015. This was noted by Staatsolie’s Managing Director, Rudolf Elias during a recent radio interview.

In providing some historical context, Elias noted that Suriname created Staatsolie, a National Oil Company, some 40 years ago as it was under the presumption that it would find petroleum resources in its offshore basin.

In comparison, Guyana does not have a state oil company that participates in offshore exploration and development activities. In this case, oil companies take 100 percent of the risk, with no money being required up front from Guyana.

With experience gained from producing over 100 million barrels of oil equivalent resources onshore from its Palaeocene and Eocene reservoirs, Suriname was able to position Staatsolie as a participating partner in negotiations with oil companies looking to explore offshore. The state oil company had sought to have a 10 % participating interest if a significant discovery is made, in addition to a royalty of 6 percent.

“Because of the fact that Guyana found oil, not in the lower part, but in the deep parts, we said ‘Hey, we also have these deep parts’. And so, a lot of companies got interested…” Observing that it shares similar deepwater characteristics with Guyana, Elias said that the decision was taken to increase Staatsolie’s participation rights for the State from 10 to 20 percent, thereby increasing the company’s return on profit oil. Elias said these contractual changes came before discoveries were made offshore Suriname.

Further to this, the official expressed that it is crucial to have a seat at the table as it has allowed Staatsolie to have a better negotiating position while allowing it to keep an eye on development costs. He also said it would be prudent for Guyana to consider doing same.

Thus far, Suriname has made four discoveries in Block 58. They are Keskesi, Maka Central, Sapakara West and Kwaskwasi. These were made in partnership with Total and Apache Corporation.