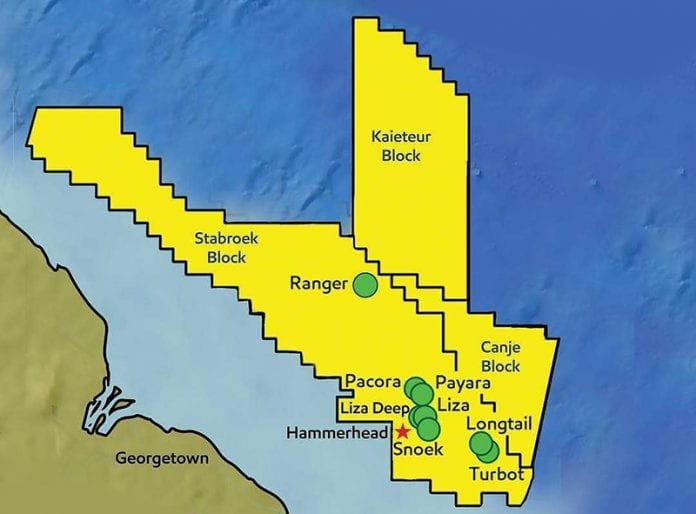 The unprecedented number of oil discoveries being made off the coast of Guyana by US oil major ExxonMobil in partnership with Hess and CNOOC are revealing mega reserves that will become a major focal point for the Stabroek Block explorers.

Industry analyst Wood Mackenzie says the more than 4 billion barrels of oil discovered so far in multiple plays across the 6.6 million acres Stabroek Block signals that more discoveries are on the way, catapulting Guyana to the top of the explorers’ most important assets list.

Speaking on a recent podcast, Ruaraidh Montgomery, Senior Corporate Research Analyst at Wood Mackenzie said it “might be sometime before we stop seeing the run of good news from the Stabroek Block. The block itself is absolutely enormous and Exxon by year-end is going to be running two drill ships that will just be focused exclusively on E&A drilling…”

Back in March ExxonMobil identified up to 20 additional drill prospects across the block and given the success since that time, “there has been 18 additional targets that it should target at that drilling program, and then, not only that, but it has established multiple plays on the block so it’s not just one play that they’ve had success in,” Montgomery said.

Most of the finds including the world class Liza discovery were in cretaceous sandstones but the company has also hit oil in a cretaceous carbonate – the Ranger discovery, and now this latest discovery at Hammerhead is a reservoir that might be sandstone.

Montgomery said the development of the Stabroek resource is a priority for all the companies in the block. “When you look at the economics you can see why it’s so important,” he said. Wood Mack is estimating significant development returns with a gross valuation that is well above 20 billion dollars, excluding the impact of the latest discovery.

“It’s a terrific deal not just for Hess and CNOOC but for the biggest company in the world – Exxon,” the analyst pointed out.

Wood Mack’s Corporate Analyst, Greg Roddick, speaking on the same podcast said ExxonMobil’s ambition to produce 750,000 barrels of oil per day by the middle of the next decade underlines the importance of the project. “Guyana alone can account for 70 or 80 percent of Exxon’s total production at peak transforming what was really an underweight possession in the deepwater sector, compared to its peers. For Hess it’s pretty much everything alongside the Bakken and tight oil,” he stated.

Guyana, he said, will drive Hess’ production growth through the next decade becoming the company’s biggest asset.

“For CNOOC as well, it’s probably their biggest international possession and it will help them to kind of mitigate some of their domestic long-term declines,” Roddick said.

ExxonMobil has made a record nine discoveries in the Stabroek Block since 2015 and will now be moving to accelerate its search for more oil with the addition of the Noble Tom Madden set to arrive in the country in October.

Oil production will begin in Guyana by early 2020 with the 120,000 bpd Liza Phase 1 development. The project is estimated to rake in more than 7 billion dollars for the South American country over its lifetime.