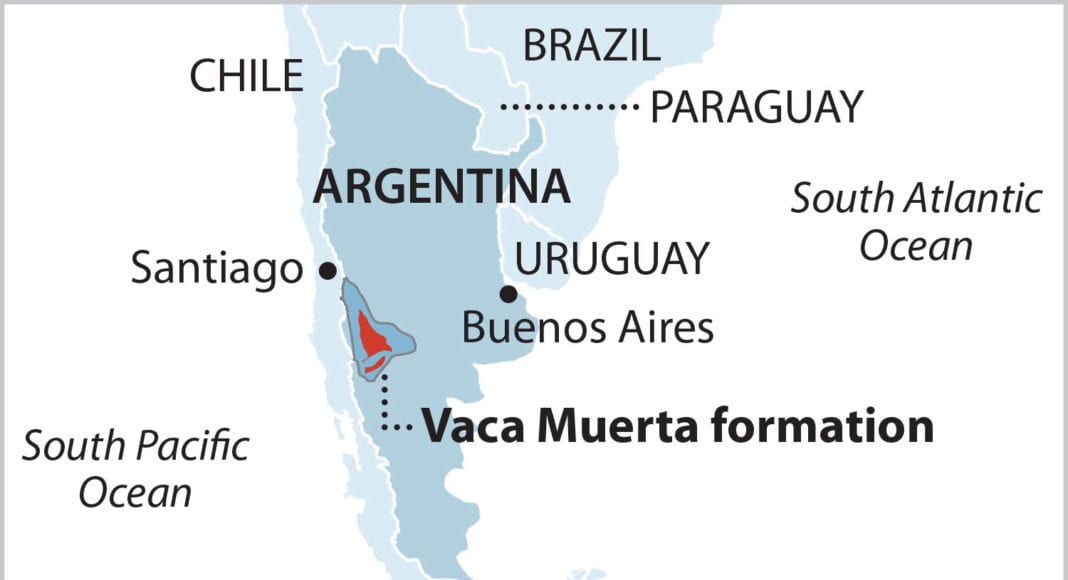 The South American country of Guyana is on course to receive the highest estimated total income from...
Read more

The largest oil and gas companies in the world,...
Read more
OilNOW
OilNow is an online-based Information and Resource Centre which serves to complement the work of all stakeholders in the oil and gas sector in Guyana.

(S&P Global Platts) ExxonMobil has been awarded a 35-year concession for another block in Vaca Muerta, a massive shale play that has been driving the company’s growth in oil and natural gas production in Argentina.

The government of Neuquen, a southwestern province where most of the play is located, said late Aug. 13 that it granted ExxonMobil the concession for Los Toldos II Oeste, according to a statement. ExxonMobil is the operator of the block with a 90% stake, with the rest held by Gas y Petroleo del Neuquen, the province’s state oil company.

As part of the concession, ExxonMobil vowed to drill and complete two wells during a four-year pilot program on the 19,200-acre block in the volatile oil window with the view to drilling 44 wells as part of the transition to full-scale development.

As part of the pilot, ExxonMobil will also drill a well into Tordillo, a tight formation that lies just below Vaca Muerta. It will also build facilities to process the production and acquire 3D seismic data for Vaca Muerta, the provincial government said.

Los Toldos II Oeste is adjacent to Bajo del Choique-La Invernada and Los Toldos I Sur, ExxonMobil’s most productive oil blocks in the play that have been driving its production growth in the country.

ExxonMobil’s total oil production in Argentina, where it is focused on Vaca Muerta, shot up more than fourfold to 5,510 b/d in March — before a nationwide slump during the coronavirus lockdown of the economy that is still in effect — from 1,227 b/d in the year-earlier month, according to data from the Argentina Oil and Gas Institute, an industry group. Over the same period, its gas production more than doubled to 1.8 million cu m/d from 703,000 cu m/d, the data show.

ExxonMobil’s decision to move into the pilot phase is “a vote of confidence” for Vaca Muerta’s potential, Gutierrez said.

He said the contract takes to 39 the number of 35-year concessions in the province’s unconventional plays, which account for 30% of the total available acreage.

ExxonMobil entered Vaca Muerta in 2010 and after initial results showed the potential for production growth, it launched its first pilot in 2016 in Bajo del Choique-La Invernada, now its most productive for oil in Argentina. In June 2019, the company shifted into full-scale development on that block with plans to drill 90 wells and take production to 55,000 boe/d by 2024.

Since then, however, Argentina has fallen deeper into an economic and financial crisis, pushing it to default on a number of bond payments this year and tighten capital controls. A freeze on diesel and gasoline prices in August 2019 — it is still in effect — has cut profit potential in the play, damping investment.

Venezuela has reportedly obtained fuel from Iran in return for plane loads of gold, according to comments...
Read more
News

(Reuters) - Oil prices fell on Tuesday as Europe and the United States grappled with a surge in new coronavirus infections and...
Read more
News

The South American country of Guyana is on course to receive the highest estimated total income from its multi-billion-barrel oil and gas...
Read more
News

The South American country of Guyana is on course to receive the highest estimated total income from its multi-billion-barrel oil and gas...
Read more

The largest oil and gas companies in the world, including US oil major ExxonMobil,...
Read more