OilNOWLatest News and Information from the Oil and Gas sector in Guyana
More
FeaturedNews
Updated: June 9, 2019

From brown sugar to black gold; a new beginning 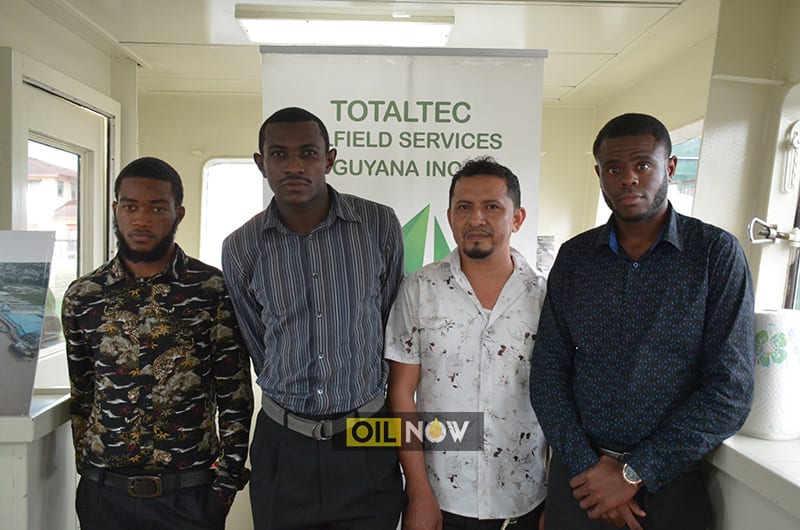 With the fall of Guyana’s sugar industry and the closure of four sugar estates, over 5000 employees of the Guyana Sugar Corporation (GuySuCo) were laid off, with many of them left in a state of uncertainty as to their future.

However, with Guyana’s developing Oil and Gas industry, a number of these laid off workers are breathing a sigh of relief as they have been given renewed hope after being presented with employment opportunities within the industry.

On Wednesday, June 5, another batch of recruits joined the TOTALTEC Oilfield Services Academy where they will be receiving training to work for Guyana Shore Base Inc (GYSBI). Of the 120 new recruits, 11 of these, mostly young individuals, are former employees of GuySuCo who say that the Oil and Gas industry means a new beginning for them.

Twenty-two-year-old Jomaul Butts has travelled all the way from Berbice and is staying in Georgetown with relatives for the next four months to undergo training. “I trained at GuySuCo for two years at Rose Hall,” he shared. The Rose Hall Sugar Estate closed in 2018, and according to Butts who received training and worked in the Electrical Engineering Department, “It was shocking to me because that was a daily bread, trying to support my family. Then, one day it just closed.”

“I didn’t know what next to do, where to turn,” he lamented. He ended up moving abroad temporarily, and when the opportunity to join the Oil and Gas workforce in Guyana came up, he immediately grasped the opportunity. “I always wanted to be in the oil field so I just decided to come to TOTALTEC since we got oil in Guyana and all these things,” he related.

He says that the developing petroleum industry gives him “a feeling of hope.”

His fellow recruit, Kurt Gomes, also 22, described the “horrific feeling” that came across him when he was suddenly left unemployed after the 2017 closure of the Skeldon Sugar Estate, in Berbice. He received training for two years in Instrument Repairs, referred to as ‘Mechanics’ by the former GuySuCo worker. The young man reflected on the impact of the closure, disclosing, “It was a very horrific feeling because after the closure of the estate, I went through a series of struggles because of the unemployment.”

Uncertainty and insecurity soon turned to hope and optimism as he came across an advertisement that would flip his luck. “I came across the TOTALTEC advertisement and I see the ways how I could get an opportunity to get into TOTALTEC and I found the address and I just applied.”

“Through the training, I want to try to achieve as much as I can and I want to set a foundation for my generations to come,” the buoyant recruit stated.

As a father of one, Jomaal Walters also has similar ambitions. “I was a cane harvester for five years,” he said, while seated among his colleagues. After the closure of the Rose Hall Estate, he went into Guyana’s interior in search of work. Realising that working in the interior would mean being away from his family, he soon explored the possibility of finding work in Guyana’s newest industry.

“After I came back out, I applied online and got through to the interview,” he shared, adding that the petroleum industry for him means a “new beginning and a bright career ahead.” “I’d like to see myself getting old and being in the industry,” he expectantly declared.

For 35-year-old Newton John, the chance to train and work in the petroleum sector is welcomed but also puts him back at first base, career-wise.

“I was an acting Plant Foreman at the Rose Hall Estate,” he shared. After the closure of that estate, he became a taxi driver and repaired cellular phones for close to a year-and-a-half before being recruited to receive training.  “I am here to learn new things and I know that TOTALTEC has a lot to offer onshore and offshore,” he said, noting that he is optimistic about his future in the industry.

These four young men are being trained to work for GYSBI. GYSBI was contracted by ExxonMobil in 2017 to provide shore base services as the oil major continues exploration activities and moves towards production. That company provides ExxonMobil with a number of services including secure open and covered storage, berthing for supply vessels, operational personnel and logistics support. Over 100 Guyanese have already been employed by GYSBI, many of whom were also recruited and trained by the Academy.

In a simple explanation, he said, “The crux of this industry is we have drill ships and we have FPSOs [Floating Production Storage and Offloading Vessel]. The drill ships are out there in the ocean. They do not come in. For the entire time that the drill ship is out there and the FPSO which will be out there, they need vessels that we call the supply vessels.”

Currently, there are four exploration drill ships operating in Guyana’s waters for ExxonMobil, as well as other ships conducting activities in preparation for production.

These supply vessels, Singh continued, “go back and forth all the time because a drill ship might have within 100 and 200 persons. An FPSO will have at least 500 persons.”

The supply vessels provide a constant supply of equipment, materials, raw materials, food, and machinery for the drill ships out on the ocean and will do the same for the FPSOs.

The Academy Manager further explained, “The shore base takes off the material that has to go onto the ship and then it loads it onto the supply vessel.”

There is a perception that only persons with tertiary education and university-level qualifications can gain employment within the oil and gas industry, however, Singh debunked such misinformation, saying, “You do not need a University Degree to enter the industry. A lot of the people we have hired do have a technical background. A lot of our graduates come from GuySuCo.”

“Oil and Gas work is significantly outdoor. A lot of the work takes us outdoors…you’re always on the boat or always on the shore base. So, it has to be persons who are comfortable working outdoors,” he emphasised.  He continued, “Work experience definitely counts. Some of the guys we have taken would not have had a lot of CXCs, they might have had like three or four CXCs but they have had the technical skills and the technical experience,” he highlighted, referring to the Caribbean Examination Council – CXC – which is an institution that provides regional and internationally recognised secondary school leaving examinations relevant to the needs of the region.

Before continuing to their classes, Butts, Walters, Gomes and John all agreed that the two industries—sugar and oil—are very different, but with the oil industry on the rise, so are opportunities for Guyanese such as themselves.