OilNOWLatest News and Information from the Oil and Gas sector in Guyana
More
FeaturedNews
Updated: December 5, 2019

Combined oil production from non-OPEC countries such as Guyana is expected to grow at record speed in 2020, creating a headache for the Organization of the Petroleum Exporting Countries (OPEC), which is scheduled to meet this week in Vienna to discuss extending oil production cuts.

Norway-based Rystad Energy predicts that total non-OPEC production (crude oil and condensate) will grow by around 2.26 million barrels per day (bpd) in 2020, creating a challenge for OPEC and Russia as they attempt to balance the global oil market next year. This will eclipse the 40-year old record by a wide margin.

“The record high production growth from non-OPEC tight oil and offshore puts significant pressure on OPEC’s ability to balance the oil market in 2020. Rystad Energy believes that OPEC will need to extend and deepen production cuts if they have any hope of supporting the oil price in the near-term,” says Espen Erlingsen, head of upstream research at Rystad Energy.

Looking at the year-over-year change in total non-OPEC oil production from 1960 – the year OPEC was born – towards 2020, we see that production from non-OPEC countries grew the most in 1978, growing 1.96 million bpd thanks to increases from Russia, the US, the UK and Mexico.

Next year, this 40-year-old production growth record may be beaten. Tight oil is expected to be a key contributor to the non-OPEC oil production expansion, contributing around 1.35 million bpd of the 2.26 million bpd increase according to Rystad Energy analysts. Offshore will balloon by an impressive 1.25 million bpd, almost 0.9 million bpd of which will come from deepwater.

“In a unique turn of events, it is the offshore segment which will drive much of 2020’s non-OPEC supply growth. The record-high production growth next year comes almost exclusively from tight oil and offshore,” Erlingsen said. 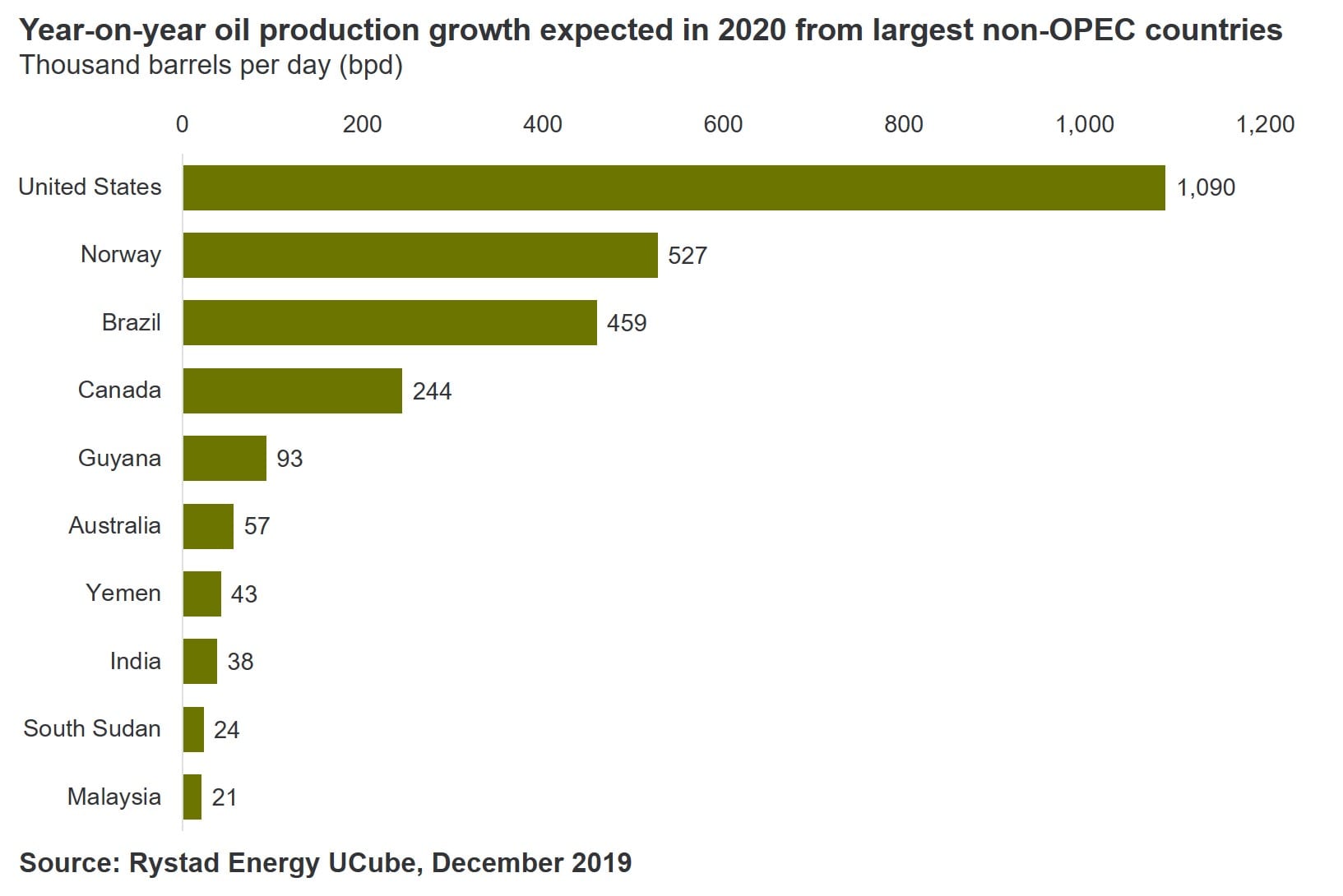 The US tops the list of non-OPEC countries which will see the quickest production growth in 2020, driven by tight oil production. Norway and Brazil, the world’s two dominant offshore players, follow close behind.

Norwegian production growth will in large part be driven by Johan Sverdrup, as well as smaller projects such as Oda, Valhall West Flank and Trestakk.

“Although a rather mature producer, Norwegian production growth may reach an all-time high next year, boosted by a bevy of young finds,” Erlingsen observed.

The same can be said of Brazil, where record-high production growth is expected next year thanks to the Buzios, Lula and Lara projects. Rystad Energy forecasted recently that Brazil’s state oil company Petrobras is set to become the world’s largest oil producer among publicly listed companies by 2030.

According to Rystad Energy’s UCube, oil production in Guyana will begin to ramp up in 2020 to around 93,000 bpd. Peak production from the Liza Phase 1 Development, which could potentially begin this month, will reach 120,000 bpd.

The lone english-speaking South American country is expected to be producing over 750,000 bpd by 2025 from multiple developments at the ExxonMobil-operated Stabroek Block. The US oil major has so far found more than 6 billion barrels of oil equivalent offshore Guyana.