OilNOWLatest News and Information from the Oil and Gas sector in Guyana
More
FeaturedNews
Updated: July 21, 2022

A focus on short-cycle investments in subsea markets over the last few years has led to more subsea tiebacks and less greenfield hub development, shifting operator spending away from subsea equipment and towards subsea, umbilicals, risers and flowlines (SURF). This is according to new analysis from Norway-based Rystad Energy, which points out that developments in Brazil and Guyana, in particular, salvaged the subsea supply chain from total devastation in 2020 and 2021 when operators curtailed sanctioning activity.

The energy research and business intelligence company said upstream capital expenditure (capex) in Latin America is expected to shift into deeper and deeper water in the coming years, with Guyana, Brazil and Mexico likely to lead the charge for new spending. While onshore investments have stabilized at around $14 billion and shallow water spending continues to decline, deepwater expenditure is projected to grow at a compound annual growth rate (CAGR) of 15% from 2021 to 2025. 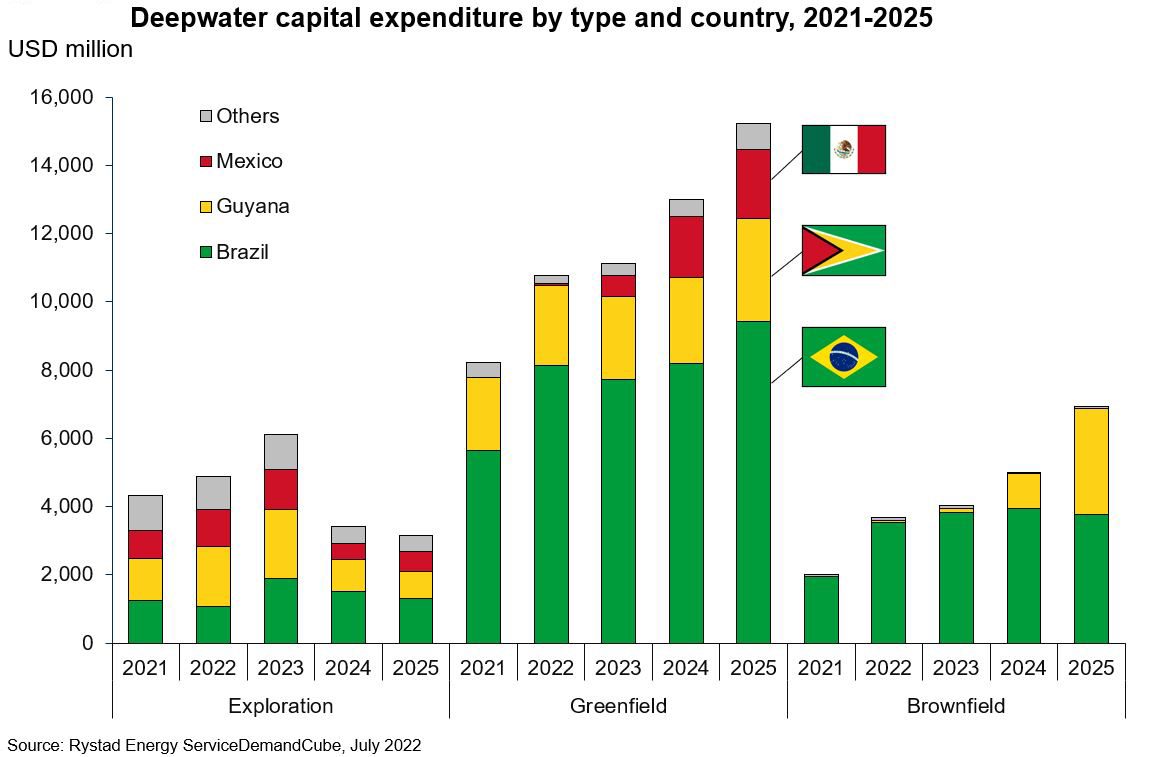 “By 2025, we estimate that deepwater investment in seismic, drilling and facilities will exceed $25 billion, nearing 2013’s historical high of $28 billion driven by Brazil’s pre-salt fields,” Rystad Energy said. “Three countries will lead upcoming growth: Brazil will retain its dominant position with Guyana growing on the back of recent discoveries and Mexico extending exploration from legacy shelf regions to deeper waters.”

Combined, anticipated mega projects in these three countries will help buoy the supply chain for drillships, floating production storage and offloading (FPSO) vessels and subsea equipment following a steady decline since 2014 when activity peaked in the US Gulf of Mexico, West Africa and Australia.

Rystad Energy said while operators appear to have lost their appetite for massive deepwater projects as their attention and capital shift to more certain returns from onshore plays, it sees this trend abating, led by offshore developments in Brazil, Guyana and Mexico.

“Within Latin America, deepwater expenditure is dominated by Brazil, Guyana and Mexico which together account for over 90% of investments,” Rystad Energy said, pointing out that deepwater projects in Brazil and Guyana will rely primarily on FPSO vessels to produce from these remote fields.

“Petrobras and ExxonMobil are the largest operators in Brazil and Guyana, respectively. While Brazil continues to develop pre-salt discoveries dating back to the Tupi (formerly Lula) field in 2006, Guyana is a newer region for oil production. Following ExxonMobil’s discovery of the Liza field in 2015, there have been a string of exploration successes leading to a growing backlog of FPSO projects,” Rystad Energy said.

Several of these feature a new generation of FPSO based on modularity and scale. SBM Offshore’s design can hold up to 2.3 million barrels of oil, slightly more than a very large crude carrier (VLCC), with space for up to 50,000 tonnes of topside equipment and options for different mooring configurations. While running some additional financial risk, a pipeline of standardized hulls also allows operators to reduce the delivery time of these deepwater projects. Given the current investment environment, this has become a dominant model for commercializing fields in these countries, Rystad Energy stated in its analysis.