The Ministry of Foreign Affairs in Guyana says it is monitoring developments regarding military exercises between Russia and Venezuela in that neighbouring country.

International media reported that two Tu-160 bombers landed in Venezuela on Monday in a Russian show of support for the government of President Nicolás Maduro. Commentators believe that this exercise could cause heightened tension in the region.

Russia and the United States have since been engaged in a row with US Secretary of State Mike Pompeo saying the move amounted to “two corrupt governments squandering public funds.”

But the Russian government has called his words “completely inappropriate”.

There has been heightened concern among some sections of the Guyanese society, particularly expressed on social media, given the ongoing border controversy with Venezuela.

The Tu (Tupolev)-160 bombers also known as White Swans in Russia and codenamed Blackjacks by Nato has a range of more than 7,456 miles, according to the BBC.

When contacted by OilNOW, Guyana’s Foreign Ministry said, “we are monitoring the developments,” through its Public Diplomacy Office.

Former Natural Resources Minister Robert Persaud said Guyana should express its concern with Venezuela and at Regional and International fora.

He tweeted, “While sovereign nations are free to conduct military drills, this one in the context geo-political tensions can have implications for the on-going Guyana Venezuela border case before #ICJ and security of our region.” 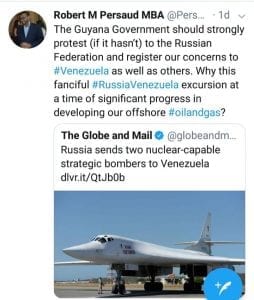 Questioned on the issue, Persaud told OilNOW that the move can be interpreted as prejudicial and creating a less than condusive environment especially given Russia’s membership of the United Nations Security Council.

“It would have been wiser that restraint be exercised by any responsible Security Council member fully aware of the gravity of the situation and geopolitical tensions which currently obtain involving both Russia and Venezuela,” he further explained.

Nonetheless, Guyana has always insisted that it is committed to the peaceful resolution to disputes.

This was reemphasized recently, when Foreign Minister Carl Greenidge addressed the National Assembly.

“Notwithstanding the case before the ICJ, Guyana remains open to pursuing meaningful functional cooperation with our western neighbours whenever that opportunity arises,” Greenidge told his colleagues on Friday.

In that very speech the Minister referred to Guyana’s partnership with regional and international agencies to coordinate a humanitarian response to the massive movements of people fleeing the political and economic crises in Venezuela.

The two countries are currently before the International Court of Justice to determine the court’s jurisdiction to hear a case to uphold the 1899 Arbitral Award that determined the borders.

Guyana and Russia established diplomatic ties on December 17, 1970 with cooperation spanning the political, economic, cultural and scientific and the security sectors. Citizens of both states can also enjoy visa free travel up to 90 days.

Over the years, hundreds of Guyanese have also benefitted from scholarships in Russia including former President Bharrat Jagdeo.

Survival mode: Maduro gives up decades of control over oil

St Vincent feeling squeeze of US sanctions on Venezuela