OilNOWLatest News and Information from the Oil and Gas sector in Guyana
More
FeaturedNews
Updated: May 30, 2022

Guyana now ahead of US, just behind Russia for largest discovered volumes since 2015 – Norway Group

As 2022 enters the mid-year point, ExxonMobil has already added over 1 billion fresh barrels of oil equivalent (boe) resources at Stabroek Block, placing Guyana at number two in the world for largest discovered volumes since 2015.

Norway-based Rystad Energy said the South American country is “galloping ahead” with a series of “quickfire discoveries” that now places the country ahead of the US and just behind Russia in terms of volumes discovered in the past seven years.

“Emerging hydrocarbons producer Guyana is galloping ahead in 2022, with Rystad Energy estimating that a trio of quickfire discoveries recently unearthed by ExxonMobil and its partners on the prolific offshore Stabroek Block together hold about 500 million barrels of oil equivalent (boe) of recoverable resources,” the energy research and business intelligence company said. “The Barreleye, Lukanani and Patwa finds, announced in late April, added to the Fangtooth and Lau Lau discoveries revealed on the same block at the beginning of the year, making it 26 discoveries in total on the tract.”

This has seen Exxon increasing its estimated cumulative recoverable resource base at Stabroek to nearly 11 billion boe.

Record 31 discoveries made offshore Guyana since 2015

“This puts Guyana comfortably in second position on the list of countries with the largest discovered volumes since 2015, behind Russia and ahead of the US,” Rystad Energy said. “Furthermore, CGX Energy recently announced a significant upgrade at its Kawa-1 find on the offshore Corentyne Block, which is likely to help push the Guyana-Suriname Basin past a current resource estimate of 13.6 billion boe, with many prospects still lined up to be tapped.” 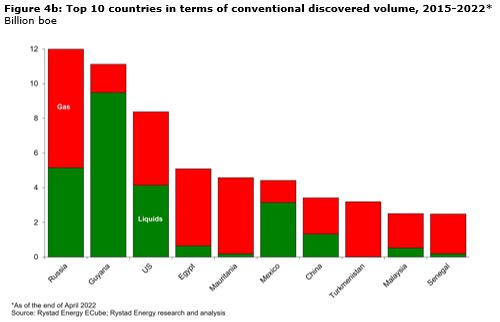