OilNOWLatest News and Information from the Oil and Gas sector in Guyana
More
FeaturedNews
Updated: March 2, 2021

Norway-based Rystad Energy has quantified the long-term risk of the change to oil prices and to the net present value (NPV) of portfolios for some of the global oil and gas companies whose resilience have come under pressure in recent years and accelerated by the pandemic.

This trend follows the back-to-back downturns that exploration and production companies (E&Ps) have faced during the past decade which have accelerated the energy transition, adding to growing social and regulatory demands for greener energy solutions.

In an analysis marathon that has generated a series of three commentaries and a report to its clients, Rystad Energy has assessed the way E&Ps are navigating the energy transition, based on energy diversification, portfolio resilience and decarbonization.

“The downside risk that the energy transition can bring to oil prices is calculated to as much as $10 per barrel in the long term, meaning oil prices could end up $10 lower in the future than they otherwise would if the transition to cleaner energy speeds up,” Rystad Energy said.

This oil price downside risk is by far the biggest factor in determining the resilience of global E&P upstream portfolios, along with the potential for rising costs for emitting carbon dioxide. Rystad Energy said it has studied the portfolio resilience of the top 25 non-national oil and gas companies and found big differences in how robust they are to the risks of lower commodity prices and increased CO2 taxes.

“The energy transition risks vary depending on each individual E&P company. Equinor, for example, whose risk is relatively smaller compared to other peers, could see the value of its upstream portfolio reduced by $21.8 billion, almost 30%, with an oil price decrease of $10 per barrel and a CO2 tax,“ says Espen Erlingsen, head of upstream research at Rystad Energy.

There is a large span for the price risk among the different companies. For some companies the value is reduced by around 50% when the long-term oil price falls by $10 per barrel. Companies with a large price risk are typically oil sands companies or shale/tight oil companies.

The reason these companies are most affected is that their portfolios normally include assets with high breakeven prices. On the opposite side of the scale, most majors have a reduction in value due to price risk in the range of 20-25%. Mature assets and high gas content help reduce the risk for these companies.

When it comes CO2-related costs, some companies stand out with a high value. Oil sands companies have the highest cost risk, causing the value of their portfolio to decrease by around 30% in an example of a CO2 tax of $100 per tonne.

“Eni, Shell, Equinor and Total all have very similar scores with modest value at risk. ExxonMobil has a higher revenue risk than its peers, primarily because its portfolio includes several large, capital-intensive projects such as Permian tight oil and its Guyana assets,” Rystad Energy said. 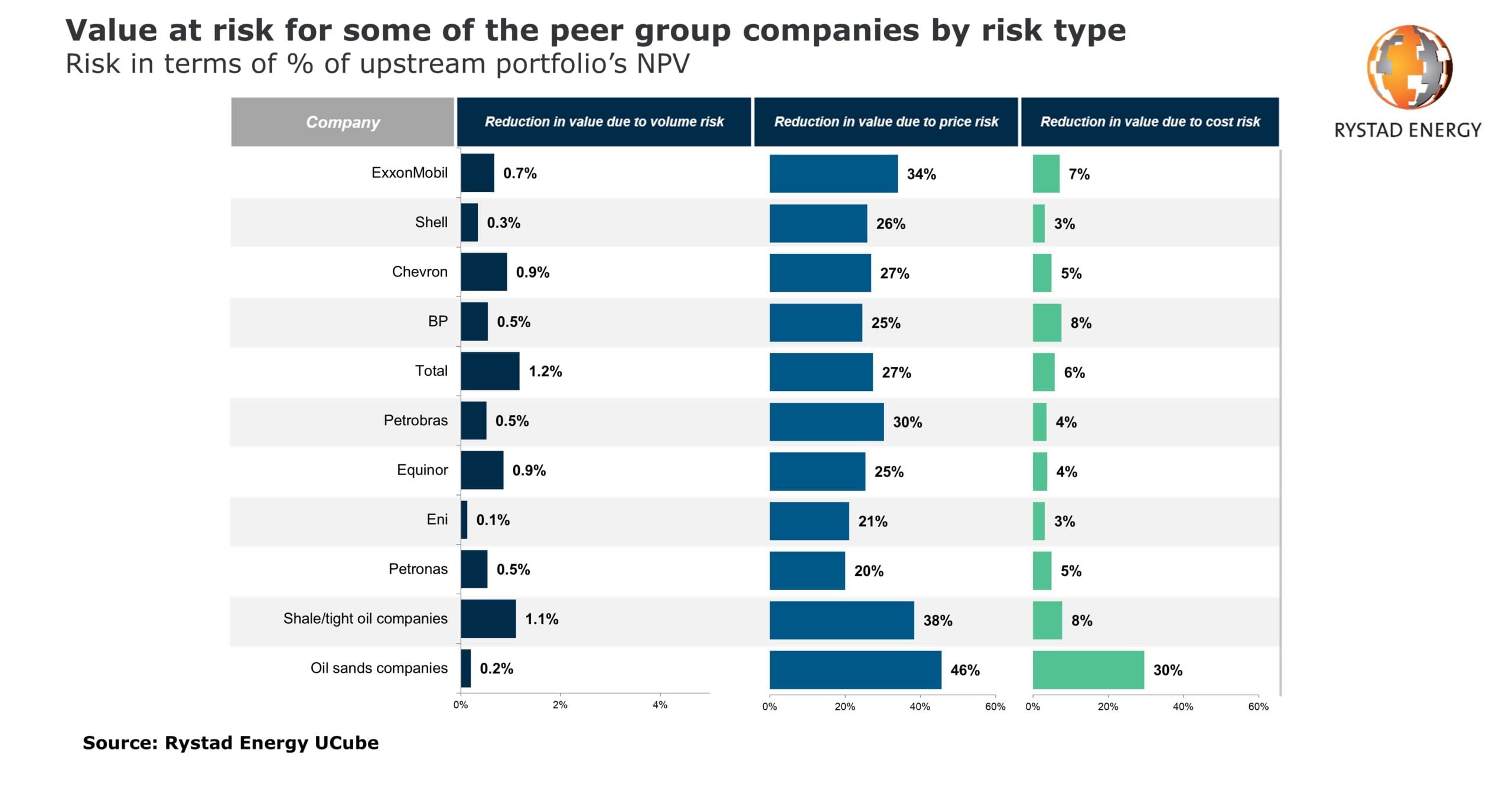 Producers with less profitable projects, like oil sands and shale/tight oil, are typically punished both along the revenue and cost dimensions. The key reason for this is that the profitability of these projects is very sensitive to price and cost changes. In addition, oil sands projects normally have high CO2 emissions, which increases their cost risk.

ExxonMobil has found around 9 billion barrels of oil equivalent resources in Guyana since 2015 and began producing oil in December of 2019. It is estimated that based on the discoveries to date, Guyana could be producing more than 1 million barrels of oil by the end of the decade, placing it among the top three Latin America producers.