How the pandemic wiped out oil demand around the world 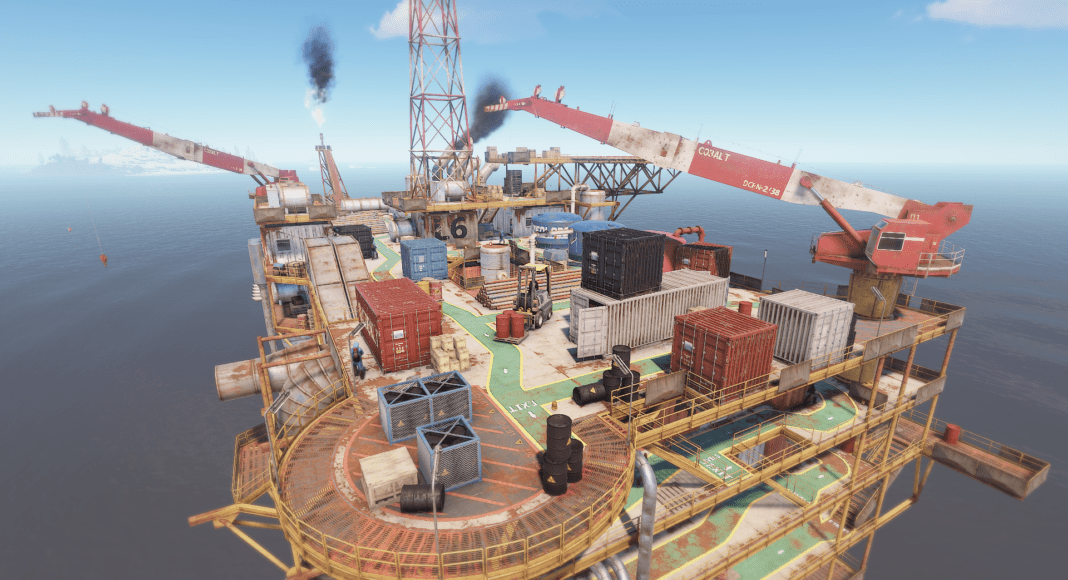 (Bloomberg) Global oil demand is being destroyed as the coronavirus forces people around the world to remain indoors and avoid all unnecessary travel.

Currently, between a third and a half of the world’s population are in lockdown, meaning few people are driving, flying or doing much that would require the use of crude or its derivatives.

The ramifications for the oil market are huge, with refiners, producers and even petrostates all facing uncertain futures. The most immediate set of data from America starkly illustrated the impact. On Wednesday, the U.S. Energy Information Administration reported U.S. drivers consumed the least gasoline for at least 30 years, as normal life ground to a halt. 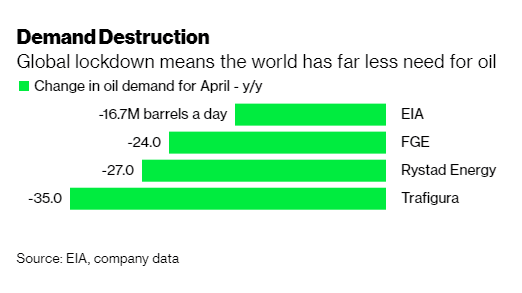 Against this backdrop, the Organization of Petroleum Exporting Countries and its allies, meeting via video conference on Thursday, agreed to cut production by 10 million barrels a day.

The agreement, which dwarves previous interventions and has been sponsored by U.S. President Donald Trump, would end the price war between Riyadh and Moscow that helped pushed oil down to the lowest in almost two decades. The deal, however, is at risk of collapse after Mexico refused to sign up.

Attention now turns to today’s meeting of G-20 oil ministers, chaired by Saudi Arabia, where countries outside OPEC+, including the U.S., are expected to make commitments to support oil markets.

Below is a reminder of how consumption has been affected in various countries.

U.S. oil demand has now fallen to 14.4 million barrels a day, the lowest in data going back to 1990 and a drop of more than 30% from pre-crisis levels, government figures showed Wednesday. In its short-term outlook, the EIA forecast the hit to oil demand will be 16.7 million barrels a day in April. A number of U.S. refiners, including HollyFrontier Corp. and Marathon Petroleum Corp., cut run rates by 30%.

Crude demand in the world’s third-biggest consumer has collapsed by as much as 70% as India endures the planet’s largest national lockdown, according to officials at the country’s refiners. Consumption for the entire month could average about 50% below last year’s levels but that’s based on India’s three-week lockdown ending on April 15 as planned, according to the officials. That’s 3.1 million barrels a day of lost oil demand, according to data compiled by Bloomberg.

Oil refineries in China, the world’s biggest crude importer, may increase processing rates to near last year’s average levels this month, providing a glimmer of hope to a global market reeling from the virus. Meanwhile, processing at private refiners, known as teapots, will continue to ramp up with some idled plants set to resume in April, Chinese industry researcher SCI99 said. Wuhan, the epicenter of the coronavirus pandemic, officially re-opened on Wednesday after being locked down for almost four months.

Canadian oil producers are the most affected globally by the Covid-19 demand hit with supply shut-ins seen surpassing 1.1 million barrels a day in the second quarter, Thomas Liles, Rystad Energy’s senior analyst, wrote in a report. To date, Canada is estimated to have shut at least 325,000 barrels a day.

In Spain, one of the countries hit worst by the disease, oil product demand fell by 23% in March, according to BloombergNEF. Air and road fuel consumption were the most affected, with gasoline and road diesel falling by 35.5% and 26.5% respectively. Demand for kerosene, predominantly consumed in the aviation sector, fell 42.5% as aircraft remained grounded across much of the country. Spain has extended its lockdown until April 25.

Italy, which together with Spain imposed some of Europe’s harshest restrictions on movement, is also expected to extend its lockdown from April 13. With the nation under strict restrictions of movement, retail fuel sales have plunged 85%, according to service station union estimates. The country’s refiners risk permanent supply-chain disruption if the country’s lockdown runs into June and companies stockpile crude and reduce production, industry lobby FederPetroli Italia said.

Sales of gasoline and diesel in the U.K. were down by 66% and 57%, respectively, as of March 31, according to the U.K. Petrol Retailers Association. Britain’s top supermarket, Tesco Plc, said gasoline sales were down 70% over the “last weeks” following the U.K. lockdown.

A survey of Dutch car dealers, driving schools and transport companies revealed that respondents had lost almost half of their revenue due to the coronavirus and about 80% may need to seek additional credit within three months. “The Netherlands really has come to a standstill,” said Bovag spokesman Tom Huyskens. “Only those that really need it are driving, filling up their tank, but otherwise traffic has pretty much stopped.”