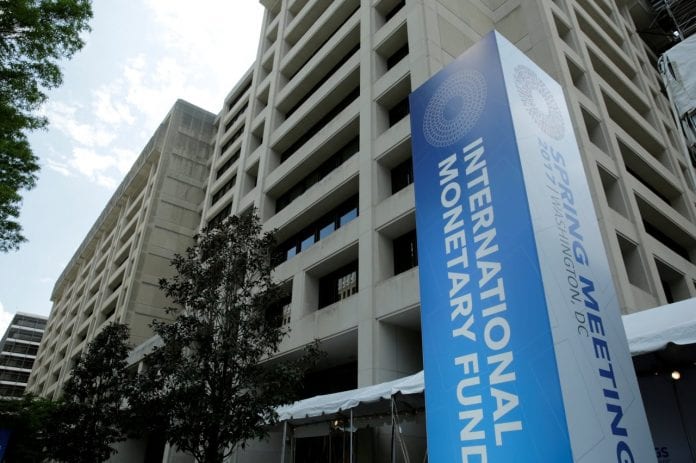 The International Monetary Fund (IMF) on Wednesday said it welcomed the progress being made in Guyana on establishing a comprehensive fiscal framework for managing oil wealth while forecasting a turnaround in the South American country’s economic outlook when revenues from oil production begins to flow in 2020.

A staff team from the IMF visited Guyana during April 23–May 3 to hold discussions for the 2018 Article IV Consultation. The team met with Finance Minister Winston Jordan, Natural Resources Minister Raphael Trotman, Central Bank Governor Gobind Ganga, other senior officials, representatives from the private sector, the opposition party, labor unions, and other stakeholders.

The monetary body said in a statement that the main direct effect on the domestic economy when oil production begins will be through higher fiscal revenue, and spillovers to supporting activities. “The balance of payments will swing sharply to positive after 2020. Oil revenue significantly improves the fiscal outlook, and is expected to place the public debt on a downward trajectory.”

The IMF said it welcomed the progress made on establishing a comprehensive fiscal framework for managing oil wealth while providing an overall analysis of the sate of Guyana’s economy, and prospects going forward.

See highlights of the statement below:

Real GDP grew by 2.1 percent, down from 3.4 percent in 2016, on the account of weaker than expected mining output and weak performance in the sugar sector. Nonetheless, non-mining growth rebounded to 4.1 percent following a contraction in 2016. Construction expanded significantly, buoyed by higher public and private investments, and rice production recovered from weather-related shocks in the previous year.

In 2017, the current account recorded a deficit of 6.7 percent of GDP from a 0.4 percent surplus in 2016. That deficit was largely financed by FDI, particularly in the oil and gas sector, and higher loan disbursements to the public sector. Reserves stood at 3.2 months of imports, and the mission projects it to remain around that level in 2018–19.

The central government deficit was 4.5 percent of GDP, lower than the budgeted 5.6 percent. This better than expected outturn was largely supported by higher revenue arising from improvements in tax administration.

The mission supports the authorities’ prudence towards private external borrowing. The authorities were encouraged to rely to the extent possible on Development Banks, including non-concessional financing, and to follow-up on their plans to develop the domestic bond market.

It commended the steps taken in response to the Public Investment Management Assessment (PIMA) in 2017, but cautioned that scaling up public investment without addressing remaining shortcomings could undermine its effectiveness. The mission also recommended moderating spending increases and the consideration of an expenditure review which could provide opportunities for safety net reform and more effective action on inclusive growth.

Infrastructure bottlenecks and high energy costs remain obstacles to growth. Meanwhile, notwithstanding significant upside benefits, the prospect of revenue from the oil sector could lead to real exchange rate appreciation, eroding competitiveness in some sectors. Therefore, regulatory and administrative measures should aim to reduce the relatively high costs of doing business in Guyana.

However, as the economic recovery strengthens, monetary policy should gradually revert to a neutral stance. Exchange rate flexibility should continue to help cushion external shocks.

Significant progress has been made in implementing the 2016 Financial Sector Assessment Program (FSAP) recommendations, including enhancing the supervisory power of the BoG and establishing an emergency liquidity assistance framework, a national payment system and a deposit insurance scheme. The mission welcomed the establishment of a Financial Stability Unit within the BoG to assess macro-financial vulnerabilities.