OilNOWLatest News and Information from the Oil and Gas sector in Guyana
More
FeaturedNews
Updated: January 4, 2021 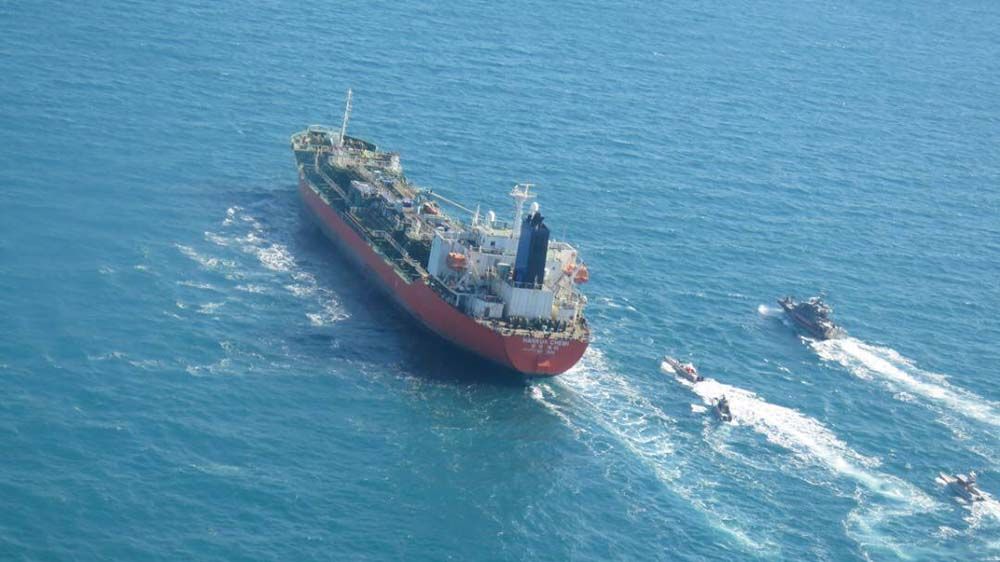 (Bloomberg) — Iran seized a South Korean-flagged oil tanker in the Strait of Hormuz hours before announcing it would increase its nuclear activities, as tensions in the region mount in the final days of Donald Trump’s U.S. presidency.

The Islamic Revolutionary Guard Corps said it detained the Hankuk Chemi vessel at 10 a.m. local time on Monday “due to repeated violations of marine environmental laws.”

It’s the latest in a series of shipping incidents in the Persian Gulf, where several vessels have been attacked or seized in recent years.

The events have unfolded against a broader backdrop of rising anxiety in the Middle East. Saudi Arabia and Iran have backed opposing sides in Yemen’s civil war. And the United Arab Emirates and Bahrain forged diplomatic links late last year with Iran’s arch-foe Israel, while unknown assailants murdered one of the Islamic Republic’s top nuclear scientists.

“By creating conditions of insecurity, Iran seeks to destabilize existing rules of law and order, challenging the Saudi and American coalitions which militarily control much of the Middle East,” Dryad Global, a maritime security firm, wrote.

On Monday, Iran also said it would start processing uranium to 20% purity, in a further breach of a nuclear deal that Trump, who leaves office on Jan. 20, abandoned in 2018. That announcement came shortly after Washington decided to keep the USS Nimitz in the Persian Gulf because of “recent threats” from Iran’s leaders against Trump. The aircraft carrier had been set to leave the region.

South Korea has sent an anti-piracy unit to the strait, the Seoul-based Yonhap News Agency reported, citing the country’s defense ministry. The Hankuk Chemi’s operator denied it had broken any environmental rules.

The vessel was carrying 7,200 tons of petrochemicals from Jubail in Saudi Arabia when it was intercepted, the IRGC said. The guard corps took it to Bandar Abbas port in Iran, the semi-official Fars News Agency said. Crew members from Korea, Indonesia, Vietnam and Myanmar were arrested, according to Iran’s Tasnim News Agency.

Iran’s foreign ministry later appeared to play down the incident, saying the seizure was related to a “technical issue.”

Relations between Tehran and Seoul have been strained since the U.S. reimposed tough sanctions on Iran and banned countries, including major Asian customers, from buying its petroleum.

Iran says it has at least $7 billion from oil sales trapped in South Korea and the funds are needed to purchase humanitarian goods, including coronavirus vaccines.

South Korea is not a member of the International Maritime Security Construct, a maritime force created in 2019 in response to Iranian attacks and to protect sea lanes in the Middle East. Seoul has previously indicated a willingness to work with IMSC, though it has not requested assistance from the alliance so far, said an IMSC spokesman.

The Hankuk Chemi was sailing to the United Arab Emirates port of Fujairah after loading at Jubail on Jan. 2, according to ship-tracking data compiled by Bloomberg. It veered off course in the Strait of Hormuz, a narrow stretch of water between the tip of Oman and Iran and headed toward Bandar Abbas.

U.K. Maritime Trade Operations, which serves as a link between the Royal Navy and commercial vessels operating in high-risk areas, said there had been “an interaction” between a merchant vessel and the Iranian authorities in the Strait of Hormuz between 6:15 a.m. and 7:33 a.m. London time.

The U.S. Fifth Fleet, which is based in the region, is “monitoring the situation,” spokeswoman Commander Rebecca Rebarich said.

On Dec. 31, a mine was discovered attached to the hull of an oil tanker off Iraq, near the Iranian border. A ship at the Saudi Red Sea port of Jeddah was hit by an explosion earlier in the month, which Riyadh labeled an act of terror.

Iran detained the U.K.-flagged tanker Stena Impero for more than two months at Bandar Abbas in mid-2019 in retaliation for the arrest of one of its ships off Gibraltar. The Islamic Republic seized another oil vessel that was sailing through the Strait of Hormuz around the same time.