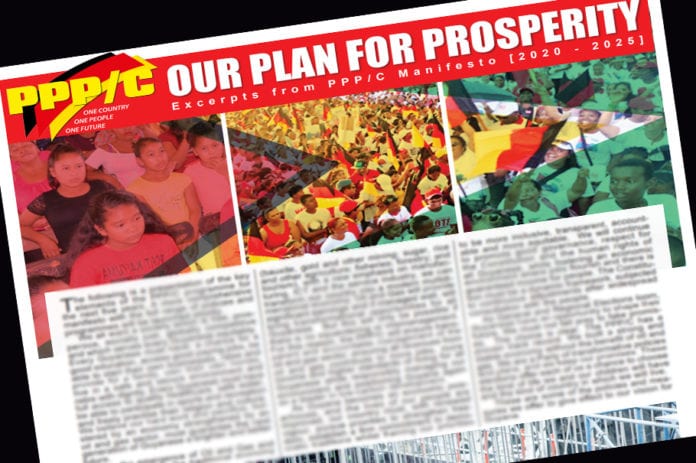 With what is being described as the ‘mother of all elections’ on the horizon, the main opposition party in the soon-to-be newest oil producing country in South America – Guyana – has released an excerpt of its manifesto which in part outlines how it intends to manage oil revenues if elected.

The party says oil and gas will bring not only significant financial resources and enormous transformational opportunities, but also many challenges. “There are many examples around the world where developing countries have obtained windfalls from oil and gas, but have eventually ended up poorer than before,” the manifesto notes while providing an outline of how the party intends to avoid this.

The PPP/C said it will establish a framework for proper management of the oil resource and advance transparency and accountability, while securing benefits for Guyanese.

“The oil resource belongs to the people of Guyana. We will ensure that oil revenue works for all Guyanese and is spent on improving people’s lives and in support of job creation,” the People’s Progressive Party Civic (PPP/C) manifesto states.

Some of the measures the party promises to take if it forms the next government following the March 2, 2020 elections, are “utilising oil revenue to support job creation, world-class education and healthcare for Guyanese, social and economic infrastructure and tax reduction for Guyanese businesses and individuals.”

The PPP/C manifesto also states the party’s intent to pursue “targeted cash transfer to Guyanese particularly the elderly, children, the poor and other vulnerable groups,” as well as, “Strong local content for Guyanese with legislative safeguards.”

The party said a PPP/C-led government “will Immediately engage the oil and gas companies in better contract administration/re-negotiation,” and will establish a model Production Sharing Agreement (PSA) “based on industry-wide standards and best practices.” The purpose of this, the manifesto said, is to ensure that Guyanese receive maximum benefit from these contracts without disincentivizing foreign investors in the sector.

Training of thousands of Guyanese at every level to create a national corps of managers and workforce was also listed as a priority project, which the party says will chart the future direction and effectively manage the oil and gas sector.

The governing coalition APNU+AFC and the PPP/C are the two largest political parties that will be contesting the upcoming elections, the outcome of which Guyanese believe will significantly impact the direction the country takes now that it is about to become an oil producer in the region.

US oil major ExxonMobil has found more than 6 billion barrels of oil equivalent off the Guyana coast and will begin producing oil at the Liza Phase One Development, possibly by December.

Norway-based Rystad Energy has said that the country can earn in excess of US$120 billion from development of the 14 discoveries at the prolific Stabroek Block.