South America has always been an important playing field for the oilfield service industry. As Brazil is turning more positive towards the international service players, Guyana is stealing some of the thunder as the country is emerging as an attractive outsider for the service industry in the region, Rystad Energy said in a February 20 report.

There is a large number of brownfield prospects that call for a substantial number of contracts and dollars to be handed out to the service side. Some contracts come in fast and as expected, and Petrobras just signed a contract with Teekay Offshore and thereby extending the employment of the Piranema Spirit FPSO on the Brazilian Piranema field.

On the global conventional greenfield scene there is a lot to watch out for this year and South America is not an exception. 16 fields are up for final investment decisions (FIDs) in 2019, more than a tripling from the year before. With expectations of eight projects of over 25 million boe reaching FID this year, Brazil will be the key driver behind the numbers for South America. 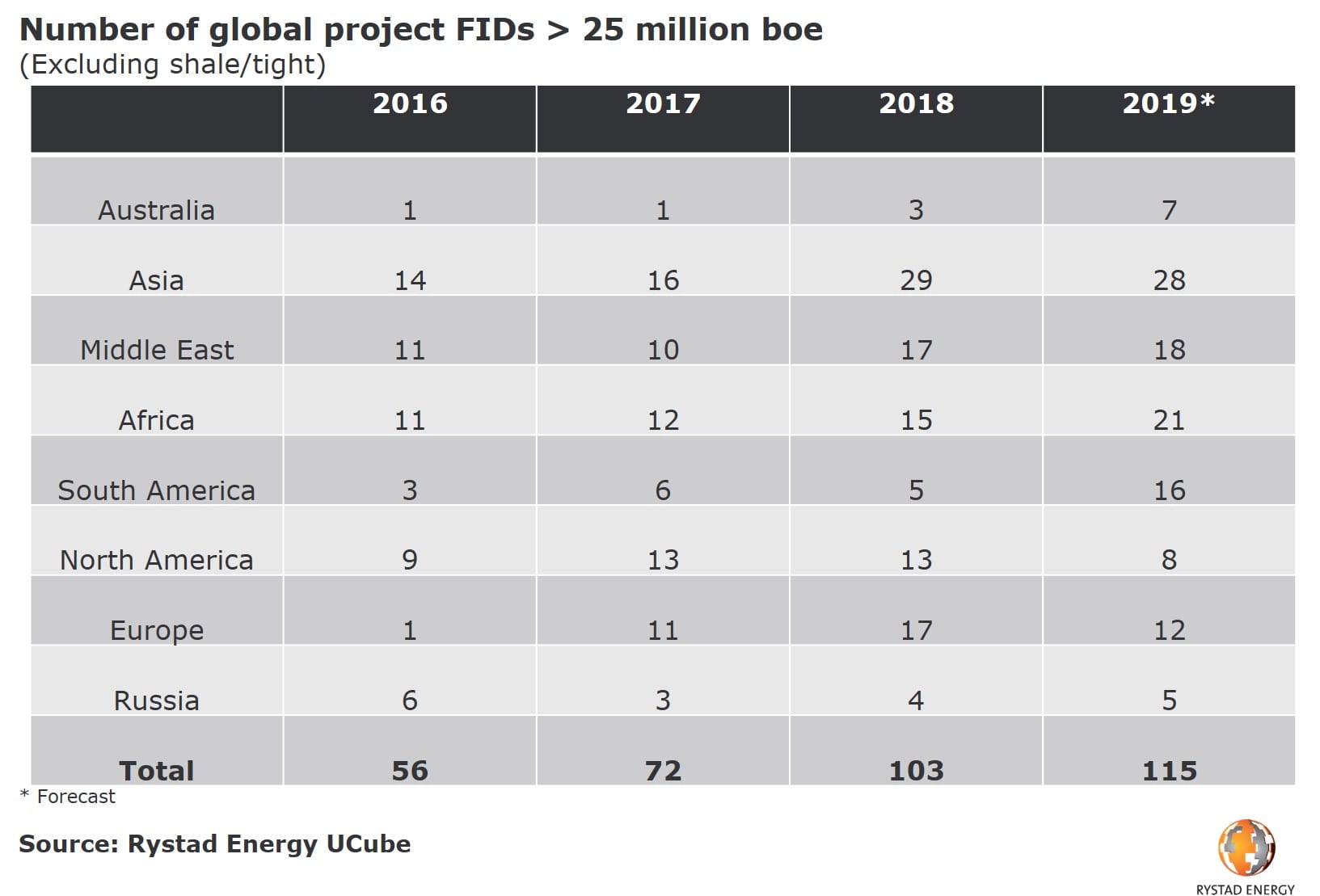 As expected, Brazil is dominating the top 10 greenfield developments to be sanctioned during 2019 in South America. The number one on the list, however, is Liza Phase 2 in Guyana where a chunk of 3 billion USD will be handed out to the service industry. All the projects on the list would be FPSO development prospects and as such Liza phase 2 will be the biggest capacity FPSO provided by Dutch SBM Offshore. Liza phase 2 will also account for the largest greenfield dollars towards the subsea sector this year of which the contract has been awarded to TechnipFMC. SBM is also one of two contenders to fight for a 22-year long FPSO contract for Mero 2 which also marks a comeback for SBM into Petrobras’ tenders following a five year time-away spent negotiating an agreement over corruption practices with Brazilian authorities. 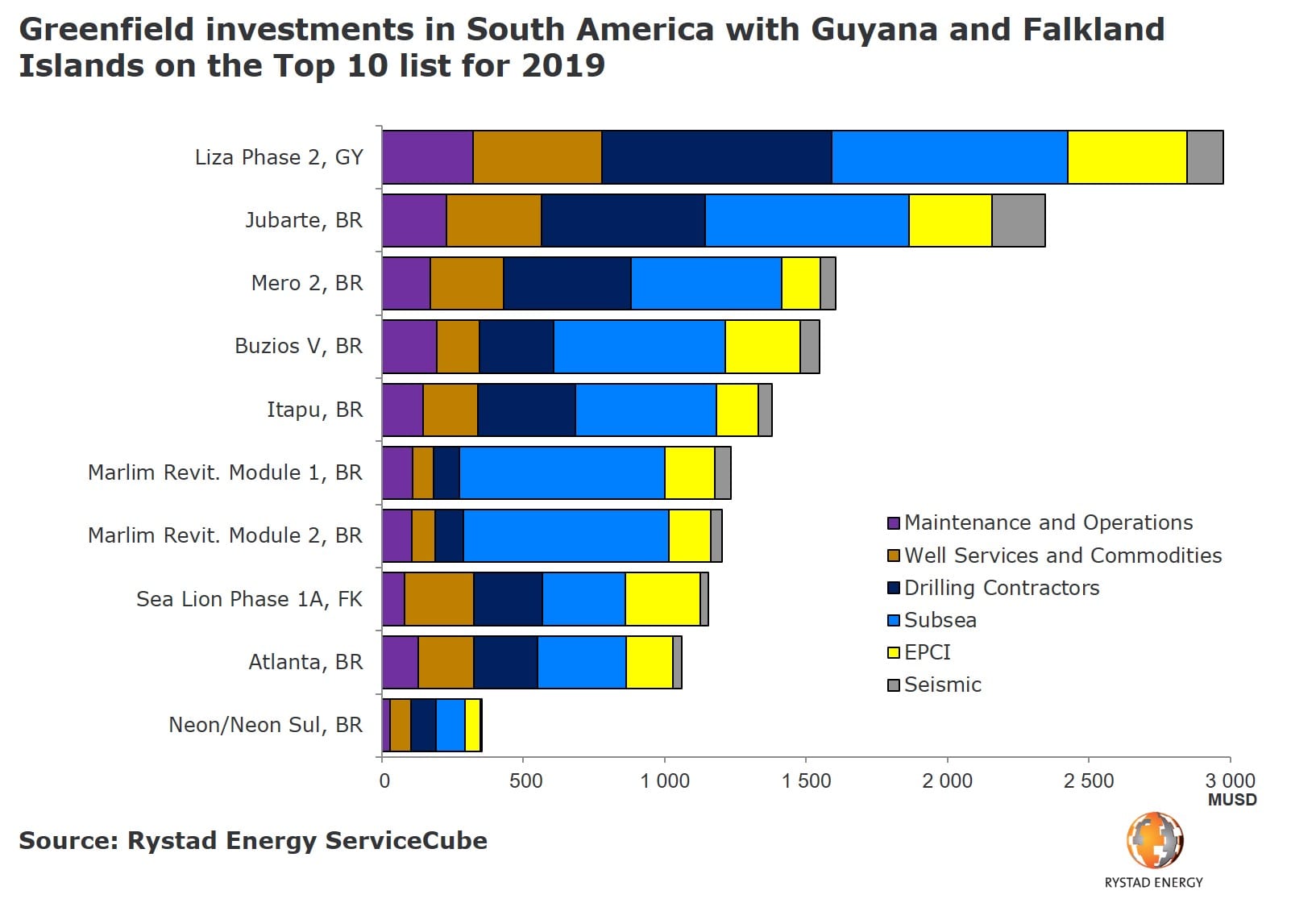 Another project to watch out for is the Premier operated Sea Lion development in Falkland Islands that is expected to get the go-ahead in mid-2019. Sea Lion’s first phase will consist of 220 million barrels. This will also be a floating facility that could produce up to 60,000 barrels per day and which is provided by BW Offshore.

Not everything moves according to schedule, and a few players have felt the pain of delays looming in Brazil. One such delay is bound to happen in the Santo Basin with Petrobras’ Buzios-5 project. First oil was first expected in late 2021, but compliance difficulties and struggles to obtain guarantees and financing are threatening Exmar’s FPSO contract. Rystad Energy currently expects startup in late 2022, but if Petrobras stages a full rebid then mid-2023 may be more likely.

Even though there is quite some dollars to be handed out on greenfield developments the silver lining for many suppliers as they navigate South American waters is that the huge projects awarded during 2019 will generate billions of subcontracting dollars in the years to follow.

Over 1 million oil field services jobs to be cut in 2020 as COVID-19, price crash wreak havoc

Japan’s MODEC to supply FPSO for Libra consortium in Brazil