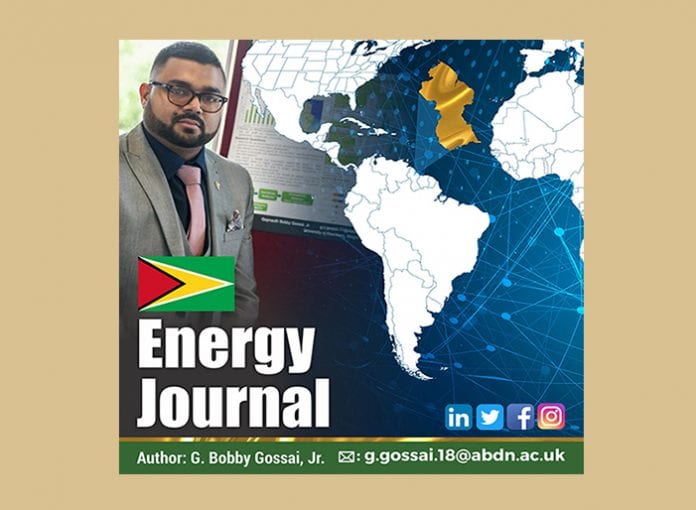 There is a plethora of studies addressing several channels through which oil shocks can affect the economy, ranging from effects on the stock market returns to labour market implications. In an important article, Hamilton (1983) argues that nine out of ten North-American recessions after the World War II until mid-1970s were preceded by sharp increases in oil prices. The correlation between oil prices and output does not represent a statistical coincidence.

Oil price shocks lead to long periods of stagflation, recently the effects of such shocks on inflation and output have been mild in most of the economies. Blanchard and Gali (2010) posit that there are four sources for such decline in the effects of oil shocks on the economy and they all played some role:

Global oil production fell sharply in the first quarter of 2019, following a steep increase in the second half of 2018. The Organisation of the Petroleum Exporting Countries (OPEC) and its partners substantially cut production, while output also fell sharply in Iran and Venezuela. U.S. oil production rose at the fastest pace ever recorded in any country in 2018, contributing to a sharp increase in exports (Wold Bank’s Commodity Markets Outlook, April 2019). 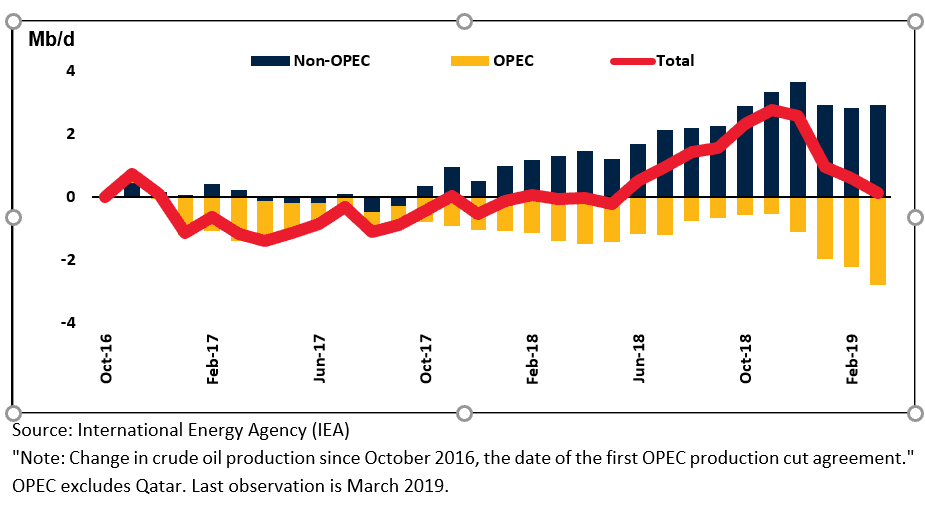 Crude oil prices are expected to moderate a little from their current levels and average $66/bbl in 2019, and $65/bbl in 2020. This is a downward revision from the previous forecast and reflects weaker-than-expected global growth and a much larger increase in U.S. production than anticipated in 2018. The forecast assumes that: oil demand growth slows slightly in line with weaker global growth this year; U.S. shale production increases robustly in 2019 albeit at a slower pace than 2018, before slowing in 2020; and growth in other non-OPEC countries rises modestly.

Risks to the outlook relate primarily to policy decisions, but are broadly offsetting. The United States’ decision on April 22 to terminate waivers to its sanctions on Iran could put upward pressure on oil prices. However, the impact of this decision remains uncertain, for two reasons.

As such, the full impact of the sanctions on the oil market could be smaller than if all Iranian oil exports stopped following the waivers expiration May 2. Iran currently exports around 1.4 mb/d of crude oil and condensates, around 1.4 percent of global supply.

It is possible that major oil-producing countries, notably Saudi Arabia and the United Arab Emirates, could increase production to compensate for any shortfall resulting from the termination of waivers. OPEC currently has around 3.5 mb/d of spare capacity, with Saudi Arabia accounting for approximately one-half of this. However, it is unclear how rapidly these countries will be willing to respond to a reduction in Iranian exports. Any change in their production will have implications for the future of the production agreement between OPEC and its partners – the group is due to meet in June to discuss whether to extend the cuts.

Other geopolitical risks also remain elevated, including conflict-related disruptions in Libya, and further deterioration in Venezuela. In addition, legislation under consideration in the U.S. congress—the “No Oil Producing and Exporting Cartels Act” or NOPEC – would allow antitrust cases to be brought against countries making it possible to sue OPEC for collectively reducing output.

On the demand side, consumption of oil could be weaker than expected, either because of slower global growth, or greater adoption of environmental policies. In addition, new regulations implemented by the International Maritime Organization will lead to shifts in demand for specific oil products and potentially for different types of crude oil. The regulations restrict emissions of sulphur by marine vessels and come into force on January 1, 2020. 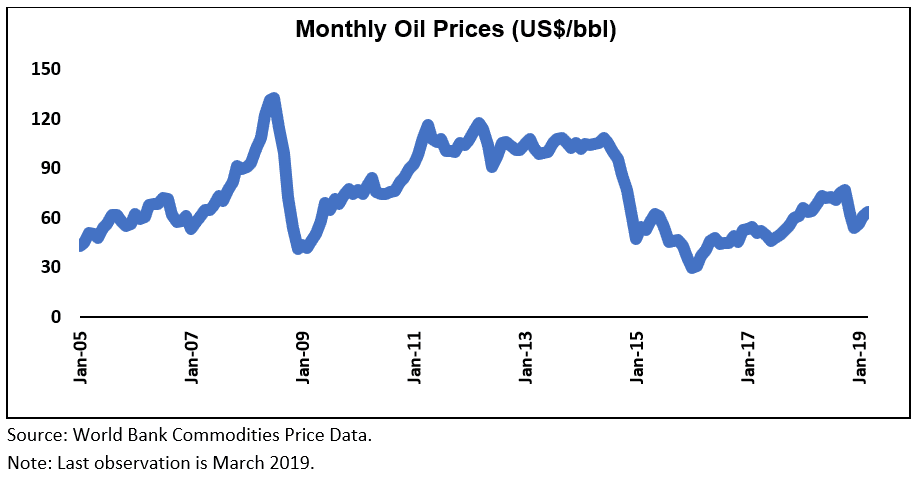 Subsidy expenditures aggravate fiscal imbalances, and crowd out priority public spending and private investment, including in the energy sector. Under-priced energy distorts resource allocation by encouraging excessive energy consumption, artificially promoting capital-intensive industries (thus discouraging employment creation), reducing incentives for investment in renewable energy, and accelerating the depletion of natural resources. Subsidies lead to higher energy consumption, exerting pressure on the balance of payments of net energy importers, while also promoting smuggling to neighbours with higher domestic prices. As most subsidy benefits are captured by higher-income households, energy subsidies have important distributive consequences that are often not fully understood. Even future generations are affected through the reduced availability of key inputs for growth and the damaging effects of increased energy consumption on greenhouse gas emissions and global warming.

Consumer subsidies arise when the prices paid by consumers, including both firms (intermediate consumption) and households (final consumption), are below a benchmark price, while producer subsidies arise when prices received by suppliers are above this benchmark. Where an energy product is internationally traded, the benchmark price for calculating subsidies is based on the international price. Where the product is mostly non-traded (such as electricity), the appropriate benchmark price is the cost-recovery price for the domestic producer, including a normal return to capital and distribution costs. This approach to measuring subsidies is often referred to as the: price-gap approach (Koplow 2009) and is used widely in analyses by international agencies. In most economies, there are elements of both producer and consumer subsidies, although in practice it may be difficult to separate the two. The advantage of the price gap approach is that it also helps capture consumer subsidies that are implicit, such as those provided by oil-exporting countries that supply petroleum products to their populations at prices below those prevailing in international markets. The price gap approach does not capture producer subsidies that arise when energy suppliers are inefficient and make losses at benchmark prices.

Although energy subsidies do not always appear on the budget, they must ultimately be paid by someone.

Whether and how subsidies are reflected in the budget will depend on who incurs them and how they are financed. For example, the cost of pre-tax consumer subsidies may be incurred by state-owned enterprises (SOEs) that sell electricity or petroleum products at a price below supply costs. If the government fully finances these losses with a transfer, the consumer subsidy will be reflected in the budget as expenditure and financed through higher taxes, increased debt, or higher inflation if the debt is monetized. In many instances, however, the subsidy may be financed by the SOE and reflected in its operating losses or lower profits, lower tax payments to the government, the accumulation of payment arrears to its suppliers, or a combination of all three. Alternatively, the cost of consumer subsidies could be offset by subsidised access to energy inputs, the cost of which would again fall on the government. In practice, the ways in which subsidies are financed and recorded in the budget vary across countries and can change over time.

Energy subsidies depress growth through a number of channels. The effects of subsidies on growth goes beyond their adverse impact on fiscal balances and public debt (Rogoff and Reinhart 2010):

The negative externalities from energy subsidies are substantial. Subsidies cause over-consumption of petroleum products, coal, and natural gas, and reduce incentives for investment in energy efficiency and renewable energy. This over-consumption in turn aggravates global warming and worsens local pollution. The high levels of vehicle traffic that are encouraged by subsidised fuels also have negative externalities in the form of traffic congestion and higher rates of accidents and road damage. The subsidisation of electricity can also have indirect effects on global warming and pollution, but this will depend on the composition of energy sources for electricity generation.