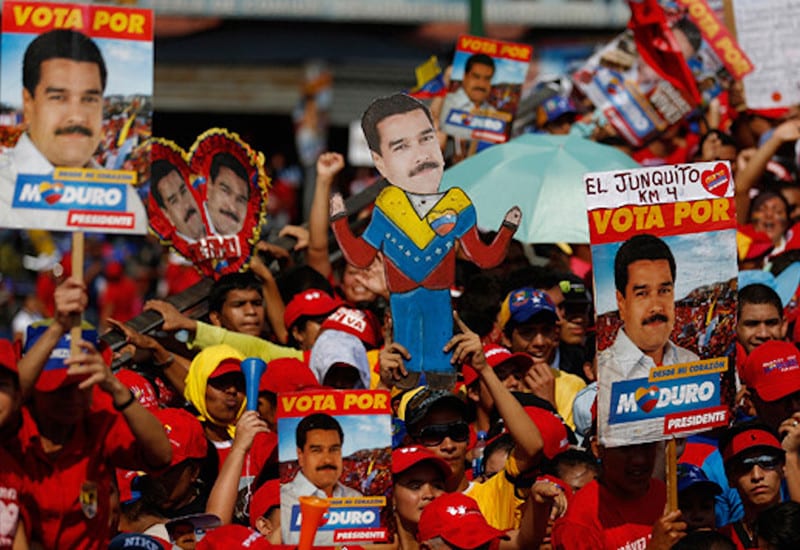 (Reuters) Venezuela’s leftist leader Nicolas Maduro won a new six-year term on Sunday, but his main rivals disavowed the election alleging massive irregularities in a process critics decried as a farce propping up a dictatorship.

Victory for the 55-year-old former bus driver, who replaced Hugo Chavez after his death from cancer in 2013, may trigger a new round of western sanctions against the socialist government as it grapples with a ruinous economic crisis.

Venezuela’s election board, run by Maduro loyalists, said he took 5.8 million votes, versus 1.8 million for his closest challenger Henri Falcon, a former governor who broke with an opposition boycott to stand.

“They underestimated me,” Maduro told cheering supporters on a stage outside his Miraflores presidential palace in downtown Caracas as fireworks sounded and confetti fell on the crowd.

Turnout at the election was just 46.1 percent, the election board said, way down from the 80 percent registered at the last presidential vote in 2013. The opposition said that figure was inflated, putting participation at nearer 30 percent.

“The process undoubtedly lacks legitimacy and as such we do not recognize it,” said Falcon, a 56-year-old former state governor, looking downcast.

Maduro had welcomed Falcon’s candidacy, which gave some legitimacy to a process critics at home and around the world had condemned in advance as the “coronation” of a dictator.

Falcon’s quick rejection of Sunday’s election, and call for a new vote, was therefore a blow to the government’s strategy. Opposition abstainers saw it as vindicating their decision.

Falcon, a former member of the Socialist Party who went over to the opposition in 2010, said he was outraged at the government’s placing of nearly 13,000 pro-government stands called “red spots” close to polling stations nationwide.

Mainly poor Venezuelans were asked to scan state-issued “fatherland cards” at red tents after voting in hope of receiving a “prize” promised by Maduro, which opponents said was akin to vote-buying.

The “fatherland cards” are required to receive benefits including food boxes and money transfers.

Despite his unpopularity over a national economic meltdown, Maduro benefited on Sunday not just from the opposition boycott but also from a ban on his two most popular rivals and the
liberal use of state resources in his campaign.

Maduro, the self-described “son” of former President Hugo Chavez, says he is battling an “imperialist” plot to crush socialism and take over Venezuela’s oil. Opponents say he has
destroyed a once-wealthy economy and ruthlessly crushed dissent.

In many polling stations visited by Reuters reporters, from wealthy east Caracas to the Andean mountains near Colombia, attendance appeared thin. There were lines, however, at poorer government strongholds, where the majority of voters interviewed said they were backing Maduro.

“I’m hungry and don’t have a job, but I’m sticking to Maduro,” said Carlos Rincones, 49, in the once-thriving industrial city of Valencia, accusing right-wing business owners of purposefully hiding food and hiking prices.

Many Venezuelans are disillusioned and angry over the election: They criticize Maduro for economic hardships and the opposition for its dysfunctional splits.

Reeling from a fifth year of recession, falling oil production and U.S. sanctions, Venezuela is seeing growing levels of malnutrition and hyperinflation, and mass emigration.

But streets were calm, with children playing soccer on one road in San Cristobal blocked off at past elections to accommodate long voter lines. For many Venezuelans, Sunday was a day to look for scant food or stock up on water, which is increasingly running short because of years of underinvestment.

“I’m not voting — what’s the point if we already know the result? I prefer to come here to get water rather than waste my time,” said Raul Sanchez, filling a jug from a tap by a busy road in the arid northwestern city of Punto Fijo because his community has not had running water for 26 days.

With the election behind him, Maduro may choose to deepen a purge of critics within the ruling “Chavismo” movement.

He faces a Herculean task to turn around the moribund economy, with the bolivar currency down 99 percent in the past year and inflation at an annual 14,000 percent, according to the National Assembly

St Vincent feeling squeeze of US sanctions on Venezuela