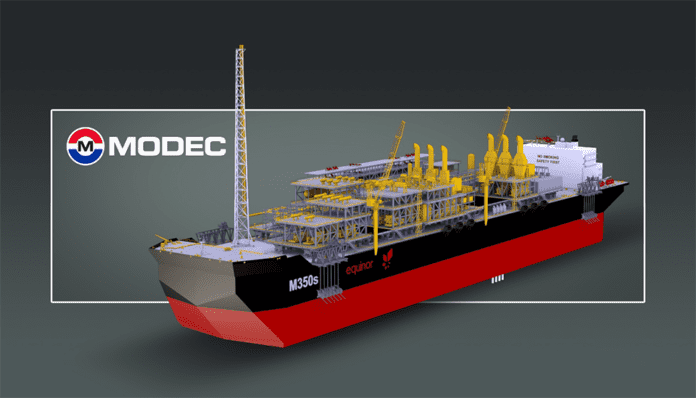 MODEC was awarded a Pre-Front End Engineering Design (Pre-FEED) contract for the FPSO in December 2018 and has now been selected as the turnkey contractor based upon its successful execution of the Pre-FEED contract and its response to the subsequent Invitation to Tender (ITT).

This contract is based on a two-step award. The FEED and pre-investment are starting now, with an option for the execution phase under a lump sum turnkey contract setup which includes engineering, procurement, construction and installation for the entire FPSO scopes. Option for the contract is subject to Equinor’s planned investment decision for the Bacalhau project late 2020.

The FPSO vessel will be deployed at the Bacalhau field, Block BM-S-8, located in the giant “pre-salt” region of the Santos Basin some 185 kilometers off the coast of the municipality of Ilhabela/SP, in the state of São Paulo. Equinor’s field partners are ExxonMobil (40%) and Petrogal Brasil (20 %)

MODEC will be responsible for the design and construction of the FPSO, including topsides processing equipment as well as hull and marine systems. The FPSO vessel will be permanently moored at a water depth of approximately 2,050 meters by a spread mooring system to be supplied by MODEC group company, SOFEC, Inc. First oil production is planned in the 2023-2024 timeframe.

The FPSO will be the second application of MODEC’s “M350 Hull”, a next generation new built hull for FPSOs, full double hull design, which has been developed to accommodate larger topsides and larger storage capacity than conventional VLCC tankers, with a longer design service life. The hull will be built by Dalian Shipbuilding Industry Co., Ltd. (DSIC) in Dalian, China.

“We are extremely honored and proud to have been selected to provide a world class FPSO for Bacalhau project which is Equinor’s first pre-salt project in Brazil,” commented Yuji Kozai, President and CEO of MODEC. “We believe this is the start of a long-term relationship with our clients Equinor, ExxonMobil and Petrogal Brasil and an opportunity that strengthens MODEC’s position as the leading FPSO service provider to the industry. We are committed to carry out this major project by cooperating closely with our clients in order to contribute to the advancement of the energy industry in Brazil.”

The FPSO will be MODEC’s 17th FPSO/FSO vessel in Brazil and MODEC’s 9th FPSO in the pre-salt region, as well as MODEC’s first contract with Equinor.