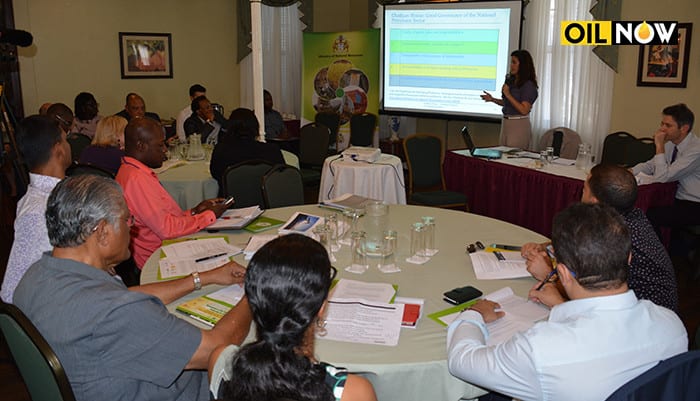 (Reuters) - Oil prices dropped on Friday and were headed for weekly declines as inventories rose and record-breaking new...
Read more
OilNOW
OilNow is an online-based Information and Resource Centre which serves to complement the work of all stakeholders in the oil and gas sector in Guyana.

The Guyana Government has embarked on the establishment of a multi-sector stakeholder committee for the oil and gas sector which it hopes will comprise members of civil society and the parliamentary parties.

The announcement came as Minister with responsibility for the Natural Resources Sector, Raphael Trotman, provided the Guyanese legislative body with an update and projections for the sector ahead of first oil in 2020.

In announcing the multi-stakeholder approach over its stewardship of the burgeoning oil and gas sector, Mr. Trotman, during his presentation to the House’s Debate over the 2018 Estimates, recalled that at the beginning of this term in office, Head-of-State David Granger invited the Leader of the Political Opposition to be a part of a number of committees – Agriculture, Budget, Border, National Unity and Security.

In announcing the formation of another committee, Mr. Trotman indicated that “Natural resources are the patrimony of the people and we are once again asking for your involvement and support and are willing to sit and discuss the issues and solutions for the improvement of the lives of the citizens and the safeguarding of the motherland.”

The Minister was adamant that, “Oil has the possibility, even obligation to bring about change…we need an oil change in this country.”

Mr. Trotman’s statement over the future prospect of oil was made in light of the fact that, “our century old engines are failing and our drivers, in every sense, have to be changed,” he said.

He was at the time making reference to the continued diminishing trend of the traditional pillars of the Guyana economy.

The Minister, in emphasizing the importance of the multi-stakeholder committee, told legislators, “In 2020 the first revenues from oil, a product that has created global upheavals over the decade, will come on stream in Guyana. We have heard little else than words about disease, curses, corruption, and disaster. But while we must ensure that none of that long list becomes our reality we should not let it become our vision of the future.”

Mr. Trotman was unwavering in his position, saying, “We have a new product and we must create the new country where we retain, retrain and retool our old and young to take advantage of this.”

Seeking to provide some level of reassurance to the Members of the National Assembly, he said, “it is apposite to inform this House that as we prepare our laws and policies we have a battery of advisors so we are confident that we are on the right track. We have utilized the services of world renowned law firms – Jones Day of the United States and Michelet & Co. of the Kingdom of Norway.”

(Reuters) - Oil prices dropped on Friday and were headed for weekly declines as inventories rose and record-breaking new coronavirus cases in the United...
Read more
News

In a decision delivered on Wednesday July 8, the Caribbean Court of Justice (CCJ), Guyana’s highest court, ruled that the judgment handed down by...
Read more

(Reuters) - Oil prices dropped on Friday and were headed for weekly declines as inventories rose and record-breaking new coronavirus cases in the United...
Read more

Guyana to establish national oil company by 2018, petroleum institute in...