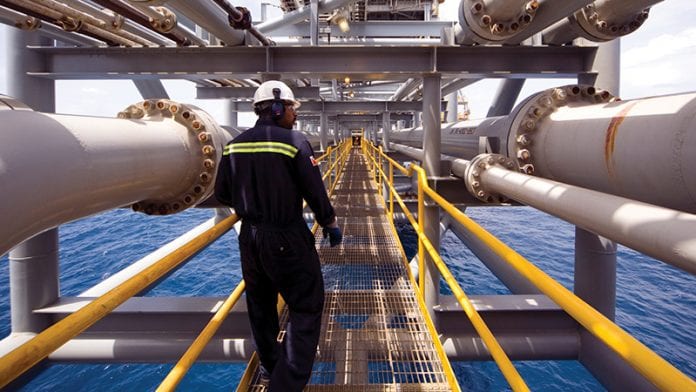 To survive in the lower oil price environment of the past five years, E&Ps and service companies alike have sharpened their pencils and delivered significant cost reductions for the offshore industry. Rystad Energy says the resulting cost savings is now propelling a new wave of global offshore project sanctioning in 2019.

Driven by Saudi Aramco’s recently announced $18 billion worth of project commitments associated with the Marjan and Berri expansion projects, overall offshore project sanctioning in 2019 stands at $56 billion and counting. “As forecasted in our July 2019 Project Sanctioning Report, this year could see the offshore industry sanction $123 billion worth of projects,” the energy research and business intelligence company said. 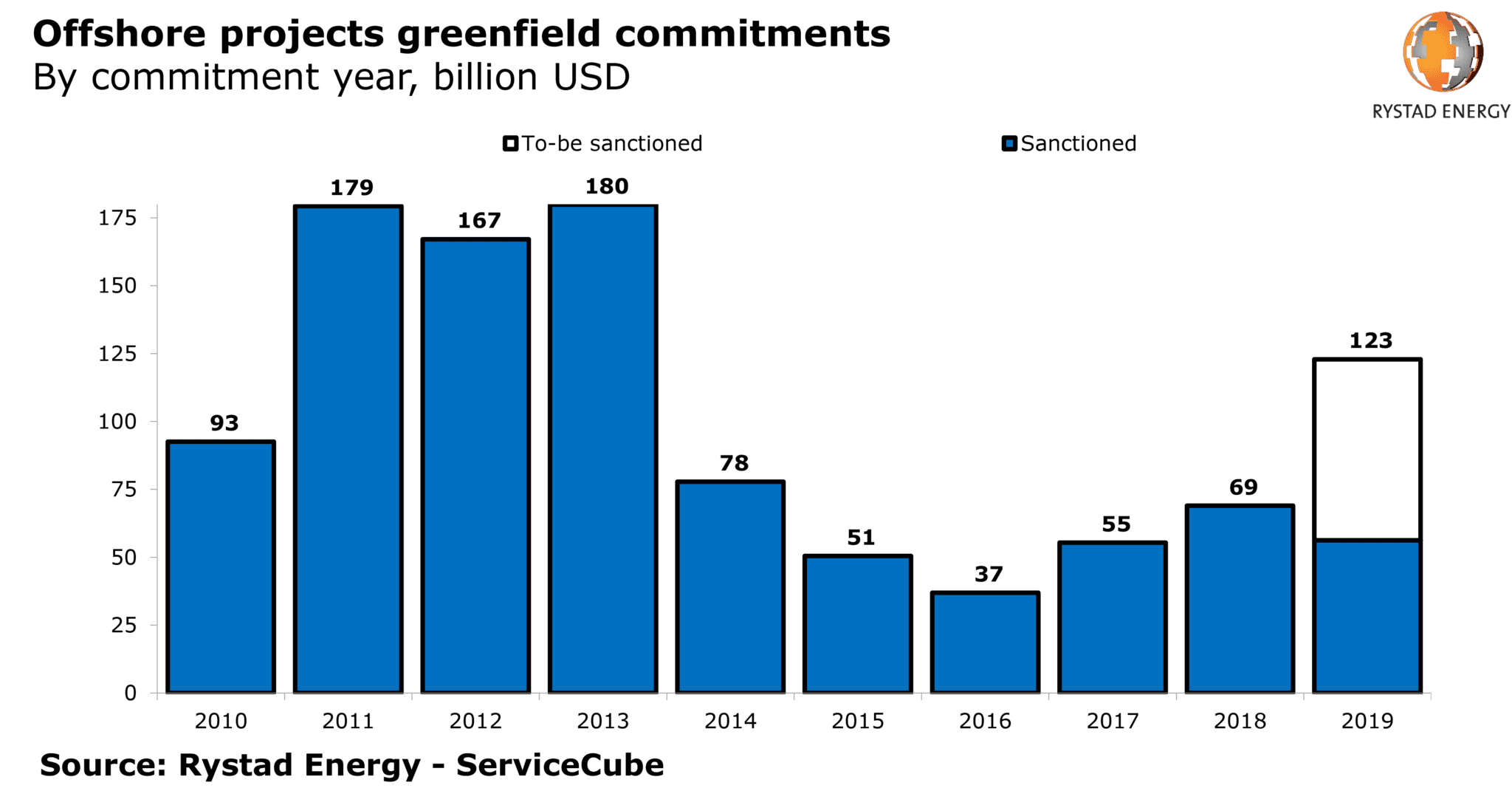 Rystad Energy said challenges remain on the path towards achieving $123 billion of project commitments in 2019. Up to $16 billion of projects to be sanctioned this year remain at high risk of not receive funding, as they require robust oil prices over $60 per barrel to breakeven. However, this still leaves plenty of other projects with lower breakeven prices well positioned to receive funding and kickoff execution efforts. This is made possible due to lower costs for these offshore projects.

Projects approvals, topside weight and equipment purchases are down

From 2015 to 2019, the offshore industry has seen fewer projects approved and fewer major equipment purchases (e.g. rotating equipment, processing equipment and drilling equipment). This has resulted in operators approving cumulative topside weights that pale in comparison to approvals from 2010 to 2014. As the clusters below indicate, many more operators approved smaller portfolios of offshore projects with cumulative major equipment costs exceeding $1 billion in real dollars from 2010 to 2014. 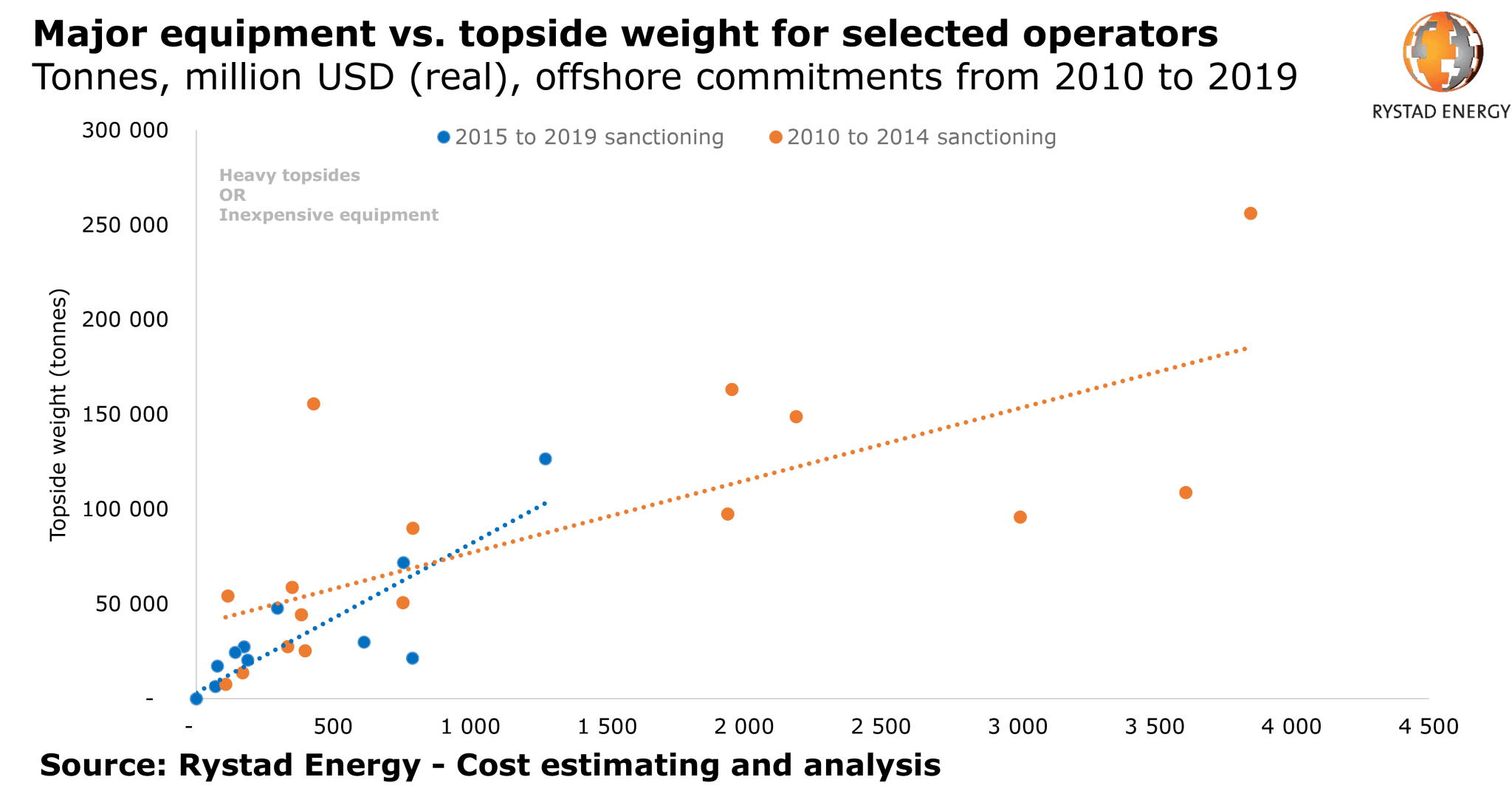 However, for the same amount of major equipment spending below $1 billion, projects sanctioned from 2015 to 2019 had significantly lighter topsides. This is attributable to both unit prices and cost reduction measures. “As noted in our February 2019 Global Service Report, topsides equipment unit prices have come down nearly 20% since 2014. While lower unit costs help explain some of this difference, they don’t tell the full story. The two weighted average ‘best-fit’ lines have drastically different slopes. Cost cutting post-downturn has been so effective that every dollar saved on major equipment has resulted in nearly double the topside weight reduction,” Rystad Energy stated.

After losing pricing power in 2015 and 2016, oilfield service companies have since regained some of their lost ground, thanks primarily to industry consolidation among players which has concentrated the market over the past few years.

To analyze this phenomenon further, Rystad Energy said it systematically track the concentration of E&P companies and service players within the oil and gas industry. Market shares are calculated for each operator and service company every year, based on their respective expenditures and revenues.

Squaring these market shares and then calculating the sum within each market segment provides a metric indicating how concentrated or fragmented that market is. This is known as the Herfindahl-Hirschman Index. If this index is further normalized to 2014 at a value of 100, it is easy to compare how the concentration of operators and service companies has developed within a market, which can in turn be used to understand key pricing power drivers. 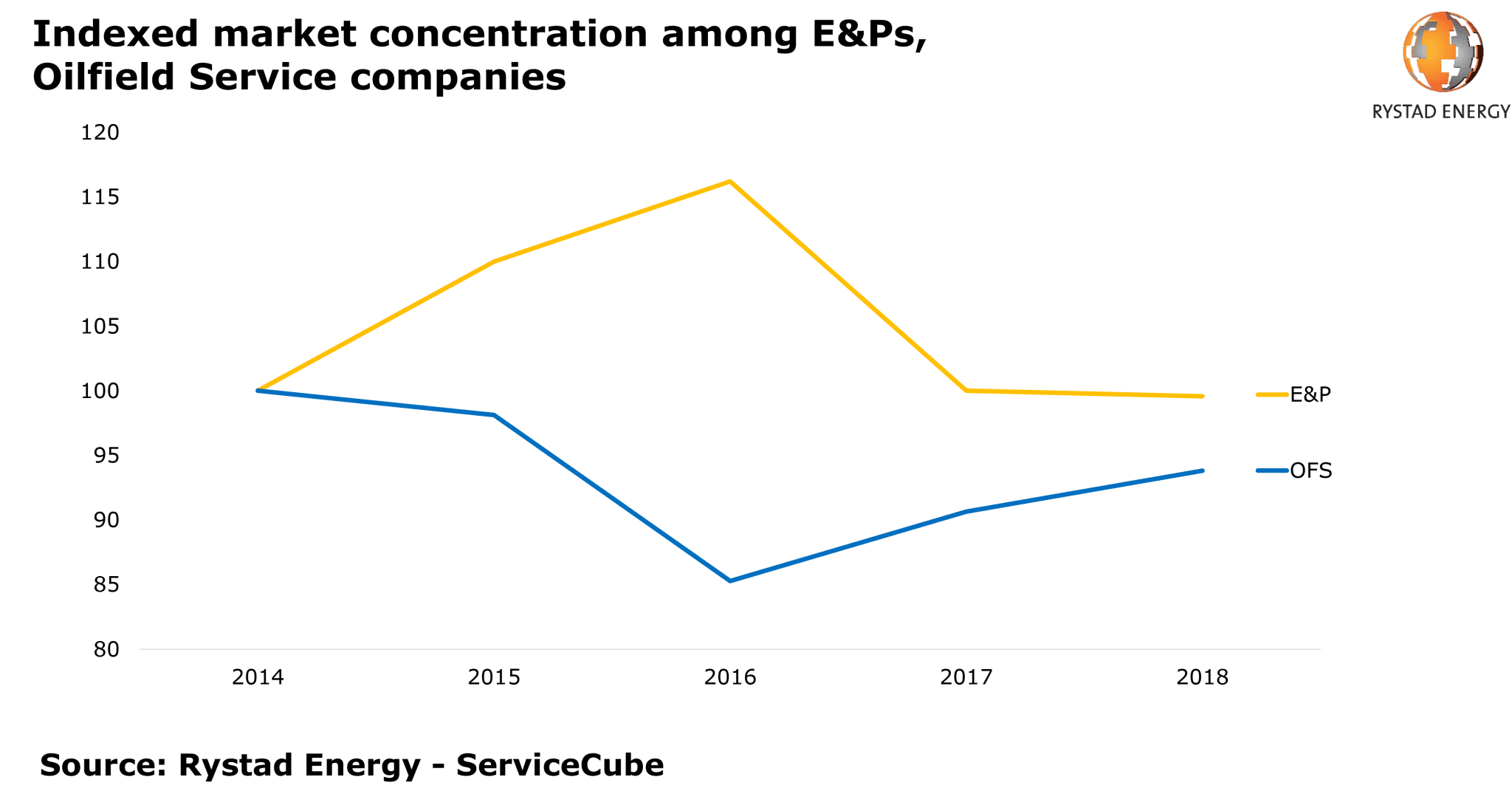 “Our analysis reveals that many operators cut back on investments in 2015 as oil prices plummeted, although some did invest counter-cyclically due to already committed projects, or in an attempt to take advantage of deflating service prices,” the analyst said. This led to increased market concentration among large and financially strong E&Ps, which were better positioned to capitalize on this opportunity.

In contrast, many smaller operators were simply forced to cut costs. This resulted in a decreased pool of oil company clients to whom service companies could sell their products and services, a trend which continued throughout 2016. Finally, in 2017 and 2018 market conditions improved and many E&Ps could finally finance ambitious operations growth through improved operational cash flow, leaving market concentration levels in 2018 on par with those seen back in 2014.

With an average of $100 billion+ of greenfield offshore projects up for a sanctioning decision each year through 2023, OFS companies should see demand for their services continue to grow. This in turn will continue to drive up their pricing power. Aggregating 54 offshore industry segments across all regions, the Rystad Energy Service Price Index forecasts a 7% increase in awarded unit prices from 2018 to 2020. 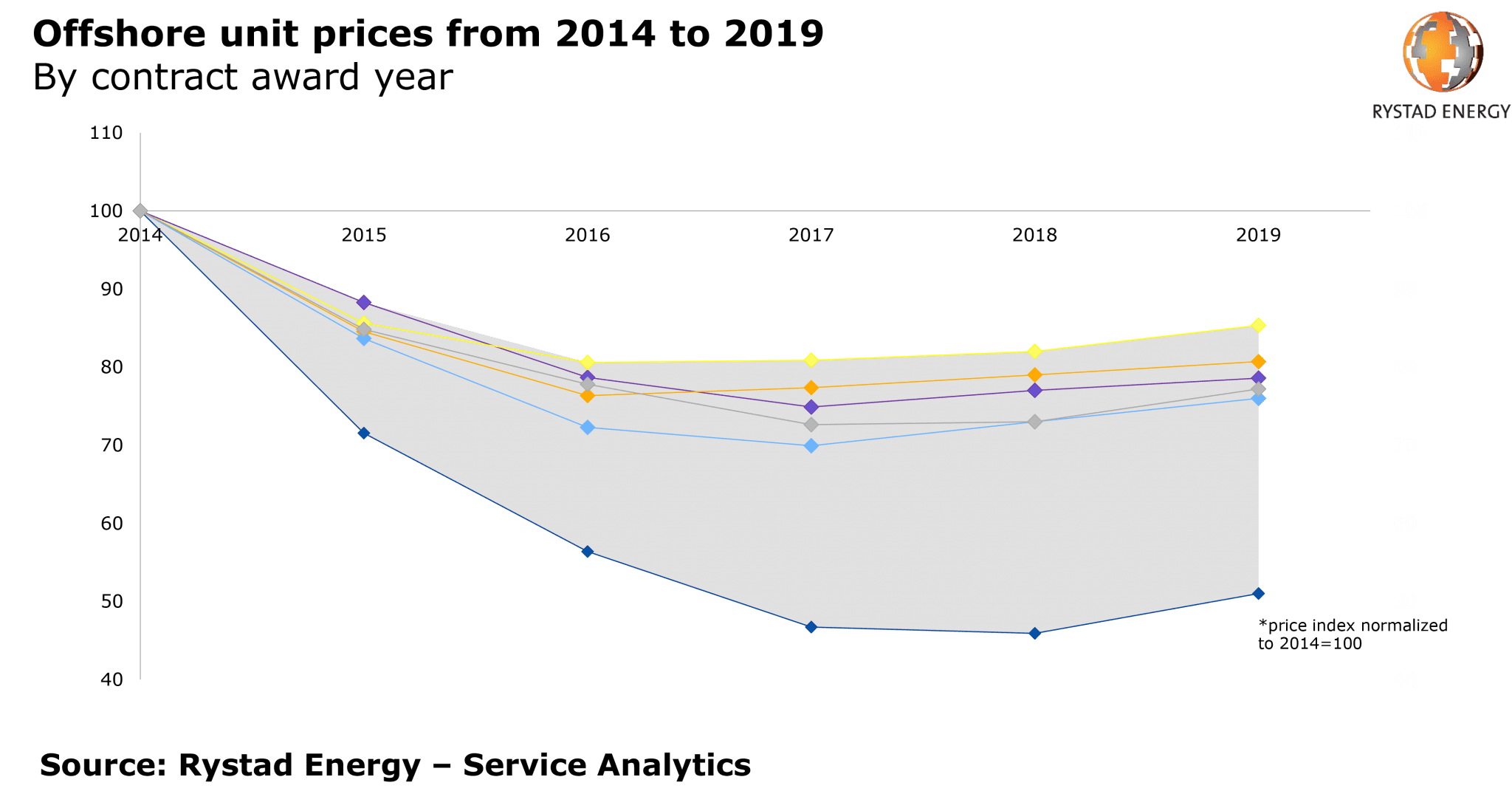 These price changes will be very regional and segment specific. While overall drilling contractors have seen unit prices slashed in half from 2014 to 2018, floating rigs have started to see a comeback in the Gulf of Mexico. Marked utilization for floaters in the US Gulf of Mexico will rise to 85% this year, up from 60% in September 2018. However, future increases will be development project specific. While wells to be completed within the Gulf of Mexico are expected to increase each year from 2018 to 2020, exploration wells will decrease during the same timeframe.

Many regions and segments alike will see the supply versus demand balance start to swing in favor of service companies. Identifying these areas and understanding the associated activity risks will be vital to capture the opportunities being presented, Rystad Energy said.