OilNOWLatest News and Information from the Oil and Gas sector in Guyana
More
FeaturedNews
Updated: November 9, 2019 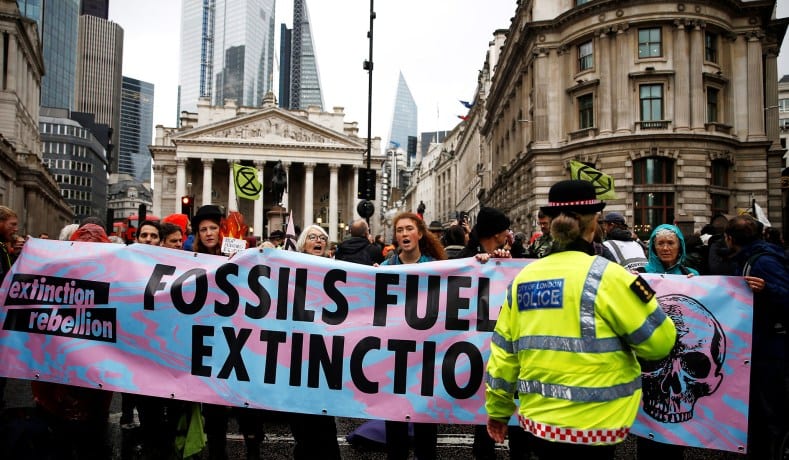 Oil production is driven by demand – in large part from people and economies in the developing world. US-based S&P Global said in an October 31 report that instead of running away when confronted by climate change activists, it is time the industry’s top executives provide these campaigners with some hard economic facts about how oil markets work.

The market intelligence firm said teaching protesters who tried to shut down the annual Oil and Money forum held in London in October about the basic economic laws of supply and demand, which underpin global commodity markets, would be a good place to start. “Most importantly, they need to dispel the myth that producers drive demand, because they don’t.”

S&P Global said the impression Shell’s chief executive Ben van Beurden, BP’s Bob Dudley and their French counterpart Patrick Pouyanne from Total gave at the event was of an industry under siege, scared to discuss anything that may enrage the Extinction Rebellion protesters outside, such as new projects to meet future demand for oil.

“Last week we got sprayed with beetroot juice,” said one exasperated delegate attending the three-day event, which has been an industry fixture since the 1979 Islamic Revolution in Iran triggered an oil price shock followed by the winter of discontent on Britain’s streets. “Today, I walked past the tent city in St James’ Park, and I walk into a forum entitled ‘Oil and Gas Falls Out of Favor’.”

Instead of shutting down central London and dousing anyone with a difference of opinion with beetroot juice, S&P Global said these activists should focus their attention more on changing behavior in countries actually driving growth in the 100 million b/d oil market. “China and India, with their gigantic populations and insatiable appetites for economic growth, are the real engines for global oil demand – not the UK, or its neighbors in Europe.”

Despite its trade dispute with the US weighing on the economy, China’s demand for oil and petroleum products continues to grow faster than any other industrialized nation. The International Energy Agency (IEA) expects oil demand in China to hit a new record this year of 13.5 million barrels per day, with transport fuels such as petrol and diesel seeing some of the biggest increases in consumption.

Likewise, India has been the biggest driver for global oil demand growth over the last five years. The world’s largest democracy, with almost 1.4 billion people, is expected to consume more than 5 million b/d of oil this year. Public transportation and the internal combustion engine are so important for the country’s future that road building was at the center of Prime Minister Narendra Modi’s re-election campaign, not climate change.

S&P Global said by comparison, the UK consumes barely 1.5 million barrels per day of oil. However, Extinction Rebellion is absent from the streets of Beijing, or New Delhi, where coal – a far worse polluting commodity than oil – is embedded in both their economies.

“It is the growing demand for oil in places like Asia that drives companies to continue investing in its production at an economic rate of return. To meet growing demand, oil producers could have to pump an additional 12 million barrels per day at least by 2040,” S&P Global stated.

Some of this production is set to come from countries like Brazil and its neighbour Guyana, where US oil major ExxonMobil has to date found more than 6 billion barrels of oil equivalent. Oil production will begin in Guyana next month and analysts expect that by 2030, the small nation of just over 750,000 people will be producing around 1 million barrels of oil per day.

S&P Global said activists argue that oil to meet global demand must never be produced and should remain in the ground, choking off supply to make it entirely unaffordable for consumers in the developing world. This, they argue, would expedite a transition to renewable energy.

However, their argument would deny billions of the benefits provided by affordable energy for transport and industry, the market intelligence company said. Of course, electric vehicles may eventually supersede the internal combustion engine, but this transition will take decades.

“There are clearly some who believe that the oil and gas industry should not be part of our energy future,” said OPEC’s secretary general Mohammed Barkindo at the Oil and Money event. “They are entitled to their opinion. It is important to state clearly that the science does not tell us this. It tells us that we need to reduce emissions and use energy more efficiently. But we do not see any reputable outlook seeing that renewables will come anywhere close to overtaking oil and gas in the years ahead. References to stranded assets leads to dangerous scenarios where investments aren’t made and expand the divide between haves and have nots.”

Making oil entirely unaffordable through taxation on fuel, or restrictions on supply, is another argument used by campaigners, but it doesn’t hold up to scrutiny, S&P Global said.

The so called “price elasticity” of oil demand is notoriously low and hard to predict. With all things remaining equal in the global economy it would require prices to fall to around $20 per barrel, from current levels just under $60 per barrel, in order to generate an additional 1 million barrels per day of demand growth. The same principle works in reverse, with a dramatic increase in prices required to reduce demand. In both cases there are severe economic consequences for both consumers and producers to measure.

“The problem with oil prices though is that you cannot hold everything else equal,” said Claudio Galimberti, head of demand and refining at S&P Global Platts Analytics. “The moment you start changing oil prices, you change the economic outlook pretty much everywhere. With oil prices at $21 per barrel, OPEC countries and the other Petro-states such as the Former Soviet Union and Brazil would enter a huge recession, with immediate and negative repercussions.”

A more reliable measure for future oil demand is economic growth, which is driven by consumers. Assuming the global economy expands by just over 3% next year, then S&P Global Platts Analytics expects oil demand could grow by around 1.24 million barrels per day in 2020.

S&P Global said this isn’t oil company propaganda, or some fossil fuel conspiracy, but the immutable economic facts of supply and demand.