OilNOWLatest News and Information from the Oil and Gas sector in Guyana
More
FeaturedNews
Updated: December 6, 2018 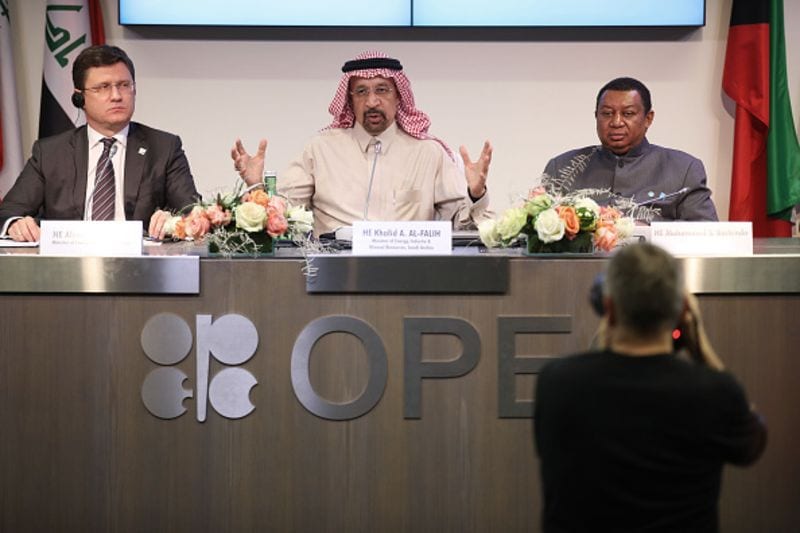 (CNBC) Oil prices tumbled 4 percent on Thursday as OPEC reportedly agreed to cut production, but ended its closely-watched meeting without a decision on how much crude the cartel will take off the market.

OPEC agreed in principle to cut production during a meeting at its headquarters in Vienna, Austria on Thursday, two sources told Reuters. However, the cartel is reportedly waiting to decide on the size of the reduction until after consulting with Russia, potentially delaying the decision until Friday when OPEC meets with non-member producers.

“This is obviously a big disappointment to the market,” said John Kilduff, founding partner at energy hedge fund Again Capital. “It certainly gives the appearance of disarray within the cartel — and disunity more than unity for sure.”

OPEC is aiming to reach an accord with the producers over output levels. Top OPEC producer Saudi Arabia has been leading calls for the group to trim output, amid surging supply and fears that an economic slowdown will erode fuel demand.

Oil producers appeared to be coalescing around a plan to remove 1.3 million barrels per day from the market earlier in the week. However, Saudi Energy Minister Khalid al-Falih told reporters on Thursday morning that a cut of 1 million bpd would be sufficient.

The two benchmarks have fallen more than 30 percent over the last two months. The oil price has been hammered by concerns that supply will outstrip demand next year, weakness in global markets and technical trading that has extended the selling.

Falih said a production cut of 1.3 million barrels per day is “excessive” in light of Alberta’s decision this week to cut 325,000 bpd in order to drain the Canadian province’s brimming stockpiles of crude. Falih also noted that production from some OPEC producers is falling.

“The number that we need is going to be less than 1.3 [million]. Is it a million? Is it slightly less, slightly more? We have all day today and some of tomorrow to determine those numbers.”

Some energy analysts questioned whether a reduction of 1 million barrels per day is adequate to balance supply and demand in 2019, especially considering that key producers including Saudi Arabia, Russia and Iraq have been increasing output.

“Given the recent ramp-up in supply from these producers, this represents a year-on-year decline in crude output of just 0.2 million barrels per day for 2019,” Ann-Louise Hittle, vice president for macro oils at Wood Mackenzie, said in a briefing.

Five unnamed delegates told Reuters ahead of the meeting that the group’s preferred level of supply cuts would effectively be conditional on Moscow’s contribution.

Russian Energy Minister Alexander Novak was quoted saying Thursday morning that it would be “much more difficult” for Moscow to cut oil output over the winter because of the cold conditions at Russian oil fields.

OPEC began managing crude supply in partnership with Russia and several other nations last year in order to end a punishing downturn in oil prices. The Middle East-dominated group produces has a long history of adjusting production to guide the energy market.

– Reuters contributed to this article