OilNOWLatest News and Information from the Oil and Gas sector in Guyana
More
FeaturedNews
Updated: July 15, 2019 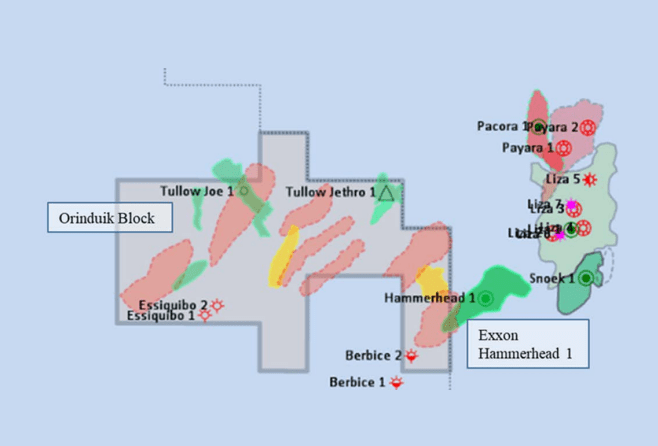 Explorers in the 1800km2 Orinduik Block, situated in shallow water (70 – 1,400m), 170 km offshore Guyana, are targeting around 220 million barrels of oil at the first wildcat well currently being drilled – Jethro-Lobe. Orinduik is located adjacent to the 6.6 million acres Stabroek Block where US oil major ExxonMobil has found more than 5.5 billion barrels of crude to date.

Jethro-Lobe was spud at 22:45hrs (Local Guyana time) on Thursday July 4 using the Stena Forth drillship. Tullow, the operator of the Orinduik Block, has 60 percent stake, Total has 25 percent and Eco Atlantic Oil and Gas has 15 percent.

Speaking on a recent podcast, CEO of Eco Atlantic, Gil Holzman, commenting on the estimated potential reserves at Jethro-Lobe said, “We anticipate around 220 million barrels at best case, best estimate, it can be less it can be more.”

He said the Jethro-Lobe play – which is a lower tertiary target located in approximately 1,350 metres of water – has the potential to open an additional series of oil pockets. “We will know much better in the next 30 to 35 days,” he stated, citing the anticipated timeline by which results from Jethro-Lobe will be known.

Jethro-Lobe is a sandstone stratigraphic trap that based on several seismic attributes is analogous to ExxonMobil’s Hammerhead discovery nearby.

Jethro-Lobe is the first prospect to be drilled as part of a two-well programme on the Orinduik Block and will be immediately followed by the drilling of an exploration well on the Joe prospect.

A third well – Carapa-1 – on the Kanuku block is expected to be drilled in the third quarter of 2019. The Carapa prospect is a 200-million-barrel Cretaceous target located in 70 metres of water and will be drilled using a jack-up rig.