A 33-day long recount of the ballots in Guyana’s March 2 General and Regional Elections shows that the opposition People’s Progressive Party Civic (PPP/C) secured a majority of the votes and pending a declaration by the electoral body, should move to form the next government in the oil-rich South American country.

But like everything related to what is now being described as the longest elections on record – 100 days and counting without a result – there may be more uncertainty ahead. 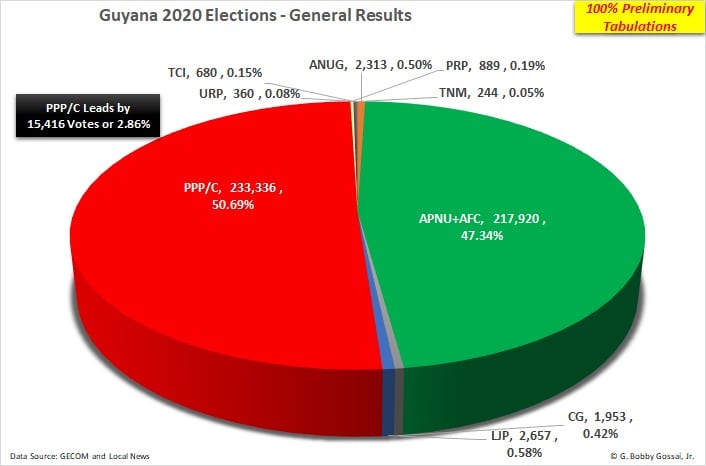 This is in contrast to two previous declarations that were made in March which showed the coalition receiving the majority of the votes. These declarations were based on what has since been proven by the recount to be inaccurate figures in favour of the incumbent put forward by embattled District 4 Returning Officer, Clairmont Mingo.  After his first declaration did not reflect results in keeping with the votes cast, Mr. Mingo was ordered by the court to redo the process in compliance with the law. His second declaration was again marred by a lack of transparency and provided results that falsely favoured the APNU+AFC. This saw widespread condemnation from local and international observers and Guyana’s bilateral partners, with the United States making it clear that any government sworn in as a result of ‘electoral fraud’ would be viewed as illegitimate and likely subject to sanctions.

While the recount results should provide a clear pathway for a declaration, the Guyana Elections Commission (GECOM) must now deliberate on two reports to be submitted by the Chief Elections Officer that will focus on the recount results itself, and a summary of observations that were made during the 33-day process. The APNU+AFC, after claiming victory in March, has since said that the polling day process was clouded by ‘widespread’ voter fraud that include ‘numerous instances’ of persons voting in the name of the deceased and in the name of those out of the jurisdiction. GECOM has not confirmed being in possession of any evidence to support these claims. The claims also run counter to previous comments by the APNU+AFC that the conduct of polling day was free and fair. Local and international observers and other stakeholders have also maintained that the election was free and fair and are calling on all parties to respect the results of the recount.

GECOM has until June 16 to make a determination on the way forward. Lawyers argue that the electoral body does not have the authority to investigate itself which is what would be required for it to probe claims of electoral fraud. They say this must be done in a court of law by way of an elections petition, which must come after a declaration is made and a new government is in place. The APNU+AFC disagrees and has said that any declaration based on the recount, will not be credible.

Guyana’s prolonged political uncertainty has stalled the government’s preparations for oil and gas and is also delaying project approvals for offshore developments. This will adversely affect the country’s ability to manage petroleum resources and effectively regulate the industry.

Political uncertainty also does not bode well for investor confidence in the economy that is projected to experience the fastest growth rate over the next 5 years.

However, despite the political turmoil, a change of government is not expected to be overly disruptive to the oil and gas sector. Both the incumbent APNU+AFC and opposition PPP/C are seen to be pro-industry. While a new administration is likely to reexamine agreements put in place by its predecessor, there is no indication that efforts will be made to alter them in a material way, although it can be expected that future oil contracts will see significant changes in their terms.

Guyanese company, Industrial Fabrications Inc. (InFab), is one of two companies that were awarded contracts from SBM Offshore in Guyana to provide fabrication services...
Read more