OilNOWLatest News and Information from the Oil and Gas sector in Guyana
More
ExplorationFeaturedNews
Updated: August 18, 2020 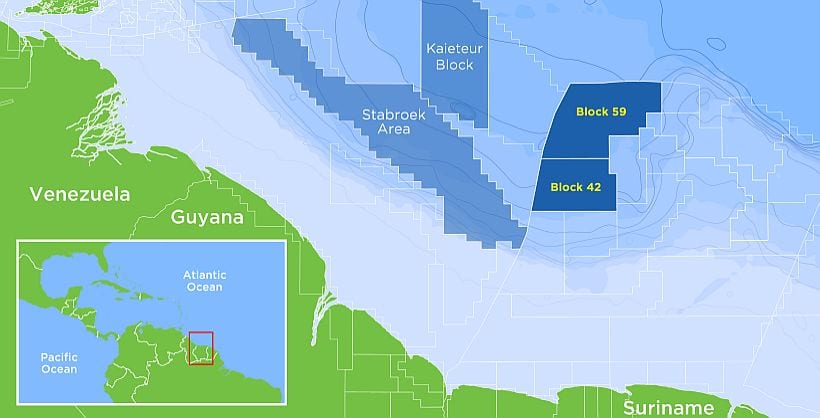 A study conducted on the Kaieteur Block offshore Guyana has revealed that nine prospects, including the Tanager-1 well where exploration drilling is underway, hold an estimated 2.1 billion barrels of oil resources.

The Stena Carron drillship arrived at the Tanager-1 well site a week ago and results from that prospect is expected within a 90-day period.

According to a report compiled by Netherland, Sewell and Associates Inc. (NSAI), the Tanager-1 well is a stacked reservoir prospect (Maastrichtian to Turonian reservoir intervals) “with a ‘best estimate’ unrisked gross (100%) prospective oil resource of 256.2 MMBBLs to the prospect (Low to High Estimates 135.6 MMBBLs to 451.6 MMBBLs), with an aggregate probability of geologic success of 72%.”

The Kaieteur block is located approximately 155 miles (approximately 250 kilometers) offshore the coast of Guyana and is approximately 3.3 million acres, which is equivalent in size to more than 580 deepwater blocks in the Gulf of Mexico.

Significantly, the Kaieteur Block lies in the same geological basin as the Stabroek Block, where total recoverable resources of more than 8 billion barrels of oil equivalent have been discovered to date.

The Kaieteur Block is currently operated by ExxonMobil (35%), with Cataleya Energy Ltd. (25%), Ratio Petroleum (25%) and Hess Corporation (15%) as partners.