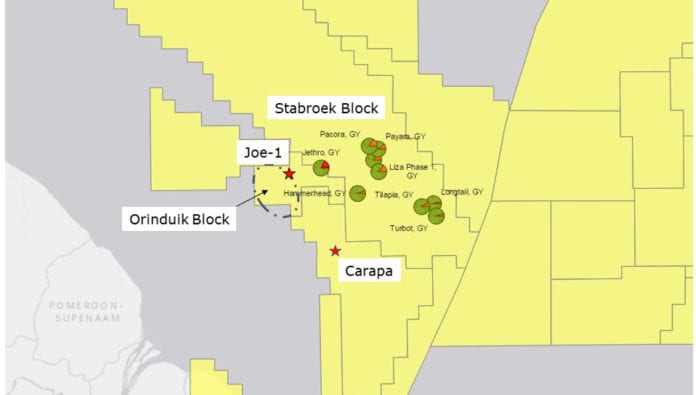 Norway-based Rystad Energy says the Joe discovery on the Orinduik block offshore Guyana, announced on Monday, is tens of millions of barrels less than anticipated.

The Joe-1 exploration well was drilled to a final depth of 2175 meters and encountered a high quality oil-bearing sandstone reservoir of Upper Tertiary age.

Joe-1, unlike Jethro-1, targeted a shallower reservoir hence de-risking the potential of prospects identified towards the west of the block. It encountered 14 meters of net oil pay.

Although the discovery opened up a new play type, Rystad Energy believes that the result was not as anticipated.

“We now expect the discovery to hold around 40 million to 50 million barrels compared to a predrill resource estimate of around 150 million barrels, indicating the inferiority of the reservoir quality in terms of thickness compared to the deeper section,” says Palzor Shenga, an exploration analyst at Rystad Energy.

This creates an interesting scenario, as the deeper section has not been targeted in Joe-1.

Repsol will drill the Carapa-1 well on the Kanuku block later this month. Rystad Energy predicts that Carapa-1 will hold a similar potential to Jethro, as the prospect follows a similar trend to Jethro.