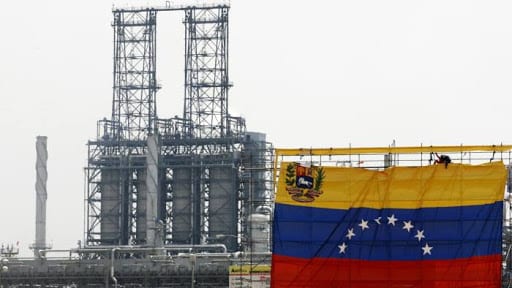 (Reuters) – Venezuela’s oil company PDVSA was last week offering discounts of up to $23 per barrel on its flagship crude, traders said, as a collapse in global oil prices puts more pressure on the state-run firm, already reeling from tightening U.S. sanctions.

Petroleos de Venezuela [PDVSA.UL] had already been pricing its Merey heavy oil this year at $16 to $18 below Brent crude LCOc1, the sources said, to entice buyers wary of drawing scrutiny from the United States, which since 2019 has sanctioned PDVSA to try to oust socialist President Nicolas Maduro, who it calls a dictator.

With Brent prices suffering their worst rout in 30 years last Monday because of falling demand due to the coronavirus and a price war for market share between major producers Russia and Saudi Arabia, low sell prices could leave PDVSA struggling to cover its costs of production. At a Brent price of around $37 a barrel, discounts put the PDVSA heavy at a scant $14-18.

“It’s a perfect storm,” said Francisco Monaldi, an energy economist at Rice University in Houston. “If this fall in prices prolongs, it would be catastrophic for Venezuela because the combination of adverse factors is lethal.”

PDVSA’s main trade partner, Rosneft Trading, has not taken cargoes of Venezuelan crude this month, according to PDVSA documents and Refinitiv Eikon vessel tracking data. The subsidiary of Russian oil giant Rosneft (ROSN.MM) along with another unit, TNK Trading, in 2019 took over a third of Venezuela’s oil exports.

To compensate for the risk, PDVSA’s price discounts against Brent have widened to $18-$23 per barrel on Merey 16, a blend of extra-heavy crude from the Orinoco oil belt and lighter grades demanded by Asian refiners, the traders said on the condition of anonymity.

The $14 to $18 per barrel PDVSA is now receiving for Merey crude is well below prices for comparable heavy grades in the region like Mexico’s Maya or Colombia’s Vasconia, which closed Monday at around $26 and $28 per barrel, respectively.

Production costs in Venezuela average between $10 and $12 per barrel, excluding a 33% royalty PDVSA pays to the government, according to two industry sources. The state-run firm has not disclosed annual reports since 2017.

Neither PDVSA nor Venezuela’s oil ministry responded to requests for comment. The ministry on Friday published data showing the official average price for a basket of Venezuelan crude grades last week was $45, or around $10 below Brent.

Even though it may be losing money on exports, PDVSA is unlikely to curtail shipments because there were already fewer buyers for its crude due to U.S. sanctions, said one industry source who spoke on the condition of anonymity. That led to a rise in domestic inventories.

Guyana legal team preparing for next submission at ICJ as court...