OilNOWLatest News and Information from the Oil and Gas sector in Guyana
More
ExplorationFeaturedNewsProduction
Updated: June 3, 2021 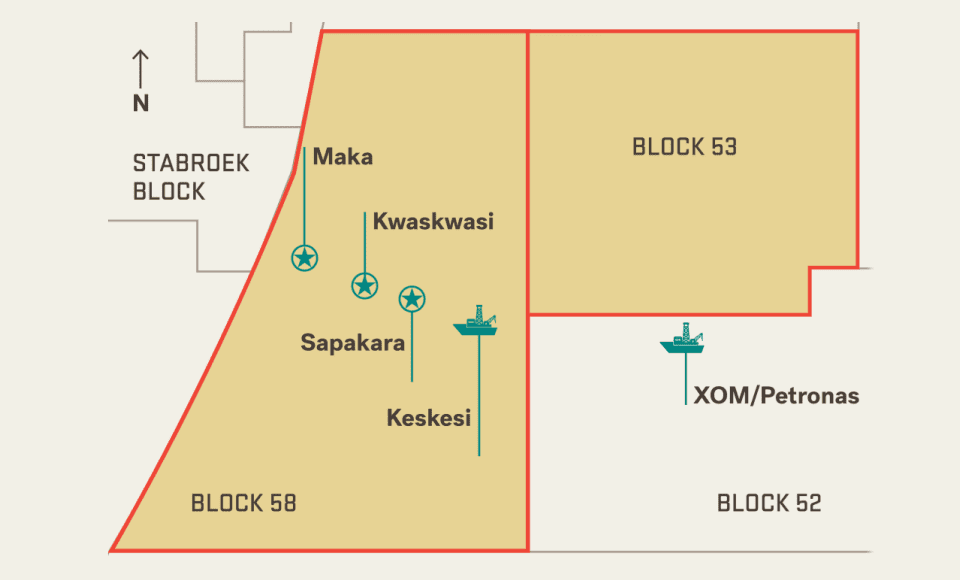 All eyes are on Suriname’s Block 58 where four of the country’s five offshore discoveries have been made to date and the scale of the resource volume and production potential is said to be “bigger than big” according to an official at Apache Corporation (APA), a 50% stakeholder in the block. Total is operator and holds the other 50% stake.

Eric Vosburgh, Vice President Exploration/Global Geoscience at APA Suriname told participants on Wednesday at the Suriname Energy Oil & Gas Summit that work is ongoing on the first two appraisal wells and the partners are appraising the first four discoveries.

“We have made a number of discoveries in different formations, different fluid types, so we’re at the very beginning and as soon as results are available, they’ll be announced in proper time, but we are moving into appraisal,” Vosburgh said. He reminded too that exploration activities are also ongoing on the block.

While declining to comment on the partners plans for an FPSO to develop the first project which is being targeted for start-up around 2025, Vosburgh said what has been discovered so far points to a block with massive production potential.

“What I would say is that the ultimate scale of the resource and production potential is big. I think I need a word bigger than big, but it’s big. It’s a large block that we’ve discovered,” he pointed out. “We discovered a lot of stacked plays in stratigraphic sequences and we’re now just starting to unravel the connectivity between the discoveries and the bodies that they lie in. So, stay tuned.”

Morgan Stanley has said its modelling of Block 58 shows that it contains a potential 6.5 billion barrels of oil equivalent resources which can be developed across seven phases.

“We assume the first phase is a smaller development of 500 MMBoe (450 MMbbls of oil) with floating production storage and offloading (FPSO) unit capacity of 120 Mbbl/d. For each following phase, we assume 1 BBoe (900 MMbbls of oil) of resource with FPSO capacity of 220 Mbbl/d,” Morgan Stanley stated.

It said the development cadence for Block 58 is informed by US oil major ExxonMobil’s plans in the Stabroek Block offshore Guyana, where it began producing oil in December 2019 at the Liza Phase 1 Development which currently has a peak capacity of 120,000 bpd.