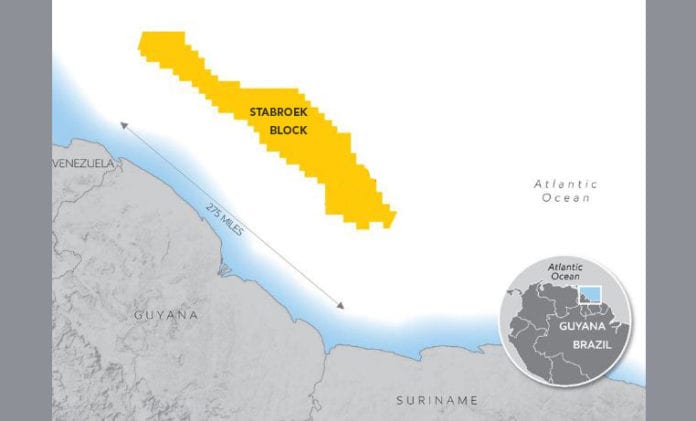 Spread over 26,800km² in Guyana’s offshore waters, the Stabroek Block is estimated to contain more than six billion barrels of oil equivalent as of 2019. Drilling has been ongoing to explore and evaluate other potential areas of the block.

Liza is the first and the biggest discovery in the Stabroek Block, announced in 2015 and is the starting point for oil production which got underway in December 2019.

The Liza phase one development involves 17 wells, comprising eight production wells, six water injection wells and three gas injection wells, to be drilled from four drill centres, and a floating production, storage and offloading (FPSO) vessel with the capacity to produce up to 120,000boed.

Other subsea infrastructure for the project include five manifolds, three production risers, one dynamic control umbilical tied back to the FPSO, and three static infield umbilicals.

The Liza-1 FPSO facility is will process roughly 450 million barrels of oil from the Liza Field.

The Bahamas-flagged Tina Very Large Crude Carrier (VLCC) was converted into the Liza Destiny FPSO at Keppel Shipyard in Singapore.

The vessel is currently anchored in a water depth of 1,525m offshore Guyana and will produce up to 120,000boed.

The FPSO will also have associated gas treatment capacity of 170 million cubic feet a day and water injection capacity of roughly 200,000 barrels per day.

The crude oil storage capacity of the Liza Destiny FPSO is 1.6 million barrels.

ExxonMobil earns $14.3B in 2019 as Guyana operations enter new chapter