OilNOWLatest News and Information from the Oil and Gas sector in Guyana
More
FeaturedNewsProductionRegional
Updated: March 8, 2021 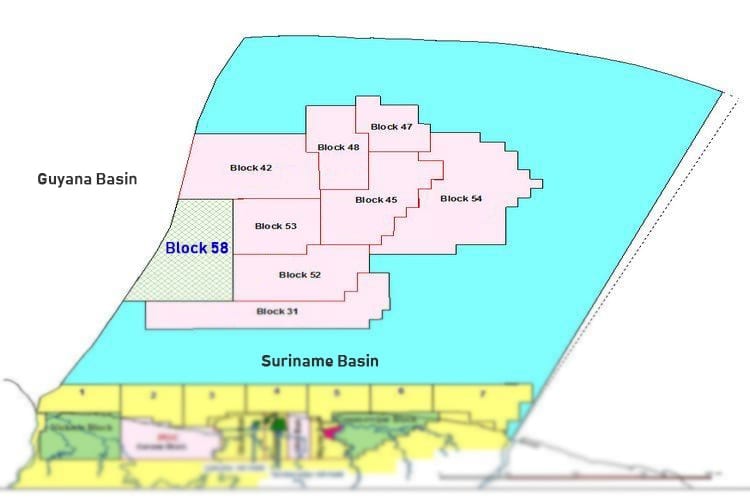 French oil major total has confirmed that plans are underway to begin developing oil fields at Suriname’s Block 58 as early as 2025, around five years after the first major discovery was made at Maka Central-1, mirroring the rapid development ramp up seen in neighbouring Guyana by ExxonMobil.

According to a March 6, 2021 report in De Ware Tijd, the first oil plans were confirmed by Ricardo Darré, Director of Total in Suriname, who made the comment during a forum in which presentations were held about the possibilities for local businesses to provide services to the offshore petroleum activities.

More than six hundred interested parties participated in the forum organized by Staatsolie. Total representatives spent more than two hours discussing what is expected of potential service providers and the requirements and qualifications they will have to meet.

According to the De Ware Tijd article, in the second half of this month, a second drillship will come to Suriname to conduct test drilling in Block 58. If everything goes according to plan, Total will be in Suriname for a long time, Darré stated.

The first appraisal well in Sapakara-West, the second discovery at Block 58, is being drilled and a second one will be started in mid-month.

More research activities will follow in the coming period, including technical analyzes and geophysical measurements of the seabed. Specialized submarines and other high-tech equipment will be used for this. Geotechnical activities will also be carried out, whereby drilling will be conducted at depths of fifty meters in the seabed to determine which anchoring will have to be applied in the production drilling rigs to be set up.

The De Ware Tijd article stated that for the production phase, a Floating Production, Storage and Offloading (FPSO) vessel will be chosen. At the beginning of 2022, the final decision will be made about the production investments and which type of FPSO will be used for production. “Once we have made the decision on the FPSO, we will begin construction, pipelines, wells and field installation with the aim of producing the first oil by the end of 2025,” said Darré.

Acting Staatsolie Director Annand Jagesar urged potential service providers and suppliers not to wait for contracts and awards before getting ready. Entrepreneurship is taking calculated risks. They will have to. Waiting for a contract before actions are taken will certainly be too late. The winners will be the companies that are now taking action and not waiting for things to be presented to them on a golden tray, according to the Staatsolie CEO.

He told interested parties that Total is looking for high-quality service providers. Jagesar called on participants to invest in upgrading their business now, in order to increase the chances of winning contracts from the offshore activities. Companies can do this independently, in collaboration with local companies or in partnership with well-known international companies that already provide services to major oil companies. “Collaboration is international best practice. As unfair as it sounds, if one of the parties thinks they are ready to part ways, they can make that decision. The more independently you try to qualify, grow and compete for assignments within, the easier you make the work for Staatsolie and the government, “he said.

The Staatsolie boss further argued that Total plans to spend only 10 million US dollars in Suriname this year. Staatsolie is now in talks with the French company for a US$30 million contract for the supply of diesel. In promoting Staatsolie, Jagesar pointed to the expertise in various areas that the company has built up over the past 40 years. “The skills and track record are unquestionable,” he said. Local businesses in particular are in a strong position, according to Jagesar, because they will be able to offer the highest percentage of local content.

According to Natural Resources Minister David Abiamofo, local content is seen as one of the most important areas for attention in the natural resources policy of the government. That is why the government is looking forward to a closer relationship with the offshore contractors with regard to capacity development and institutional strengthening that is in line with their commitment to corporate social responsibility. The Department of Natural Resources advocates for local content development in the early stages of the development of the oil and gas sector, by investing in human capital development in all social strata.