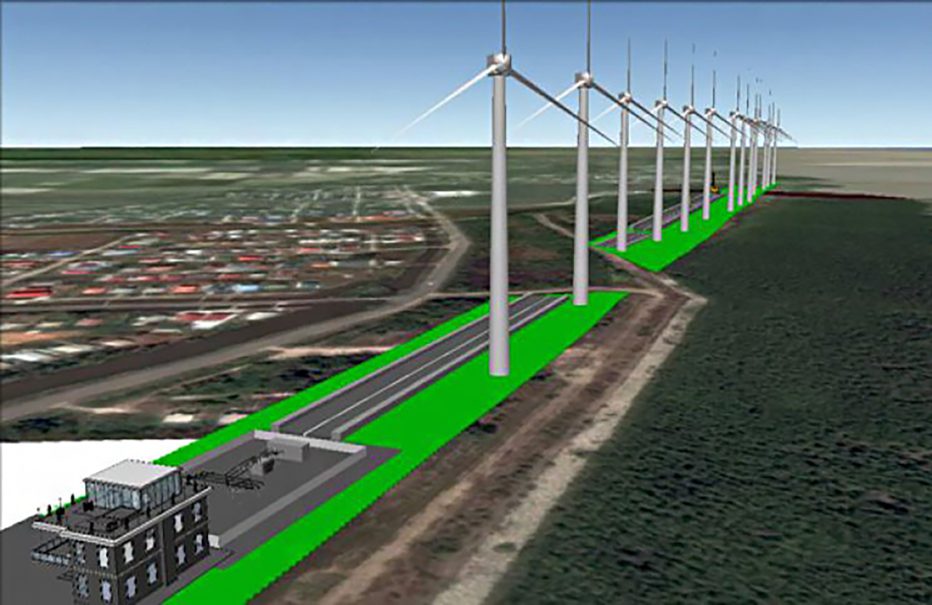 According to project documents, the 25.2MW wind farm will generate over 80GWh per year, to be delivered to the Guyana Power and Light (GPL)’s grid according to the terms of a Power Purchase Agreement (PPA) and Grid Interconnection Agreement. This wind energy therefore represents over 10% of GPL’s gross total electricity generation, enough to supply 7000 homes with power.

The project will be located on a 27-acre state-owned lease at Hope Beach (HB), and private leases at Chapman’s Grove (CHG), some 28km and 30km, respectively, SE of Georgetown centre. The HB lease is the location identified for four wind turbines (on the seaward side of the existing seawall, North of the plantations: Hope, Douchfour, Two Friends, Anns Grove, Clonbrook and Beehive). The CHG lease is the location of two additional wind turbines, on coconut plantation lands inboard of the seawall, bounding Unity Village.

The 50-year HB lease was awarded on March 9, 2007, by former President of the Cooperative Republic of Guyana, Mr. Bharrat Jagdeo, specifically for industrial purposes.

OilNOW understands that the Hope Wind Farm is a pilot project that will inform all stakeholders on what is required to build and operate a wind farm in Guyana and how to integrate this energy into GPL’s grid. Furthermore, the project will confirm the promising performance of wind energy, reduce the reliance on fossil fuels and its associated emissions of CO2, pollutants, and reduce substantial foreign exchange loss due to fuel imports. It is also poised to generate local jobs in construction operation and maintenance of a renewable energy facility.

Additionally, the Environmental Permit application will be held in the name of Hope Wind Energy Inc (HWE). Once the project is ready to start construction and all financing is in place, additional Guyanese investors will be invited to participate, with an aim of achieving more than 50% Guyanese ownership of HWE and the project.

For the time being, the leases, project rights, assets, and liabilities are owned by Hope Wind Energy Inc which is a wholly owned subsidiary of Hope Energy Development Inc (HED), a project development company owned by three partners which includes SPI (Denmark and Colombia). SPI is the project developer and key investor, with more than 10 years of experience in Solar and Wind investments in Europe. It is backed by a broad group of Danish and international investors and has linkages to Danish wind industry expertise and financing.

Innova Energy Ltd, Trinidad is also part of the trio and is SPI’s partner in the Southern Caribbean, acting as Project General Manager and a key investor.

Total Energy Solutions Inc. Guyana is the partnership’s representative in-country and works as an interface with local stakeholders, while providing support for Guyana based activities and local stakeholder engagements.

OilNOW understands that actual dates of subsequent stages are dependent on the time it takes to obtain a signed PPA. Detailed design and finalisation of financing terms would follow and is estimated at 6 to 12 months after the signed PPA, with financial close and start of construction possible before the end of 2022.

As for wind farm commissioning, this is expected 8 to 12 months later. The plant is planned for commissioning some 18 to 24 months following the signing of the PPA and may occur as early as the third quarter of 2023.

Once the project is realized, it will no doubt add substantial momentum to Guyana’s journey towards true energy security based on renewable energy.