OilNOWLatest News and Information from the Oil and Gas sector in Guyana
More
FeaturedNews
Updated: January 13, 2019

More than five billion barrels of oil have been discovered to date off the Guyana coast in an area called the Stabroek Block which is internationally recognized to be part of the South American country’s Exclusive Economic Zone (EEZ). But its western neighbour – Venezuela – has heightened its claim to large swathes of this territory ever since US oil major ExxonMobil made its first discovery at the Liza field back in 2015.

Speaking at a symposium on ‘Continuous Venezuelan incursion into Guyana’s territory,’ held by the Guyana Trades Union Congress last week in Georgetown, Foreign Minister, Carl Greenidge explained that the Bolivarian Republic of Venezuela is trying to enforce domestic legislation, which ‘tries to or lay claim’ to a large portion of Guyana’s maritime space within its EEZ – an area which encapsulates the oilfields being explored by ExxonMobil.

The Bolivarian Republic is using a 70-degree line to map out what it considers to be its rightful maritime space. “The 70-degree line cuts Stabroek Block, not in half (but entirely),” Greenidge said.

“The significance of this is that the Venezuelans may be operating with intent to ensure that they use this as a leaver for negotiating to get a bigger; or the entire economic zone, by effectively seizing this part of the EZ and that part of the Stabroek block, where the largest reserves lie,” he noted.

Also speaking at the event, retired Major General and former Chief of Staff of the Guyana Defence Force, Joe Singh, urged authorities to ensure that Guyanese are more aware on issues relating to the nation’s sovereignty.

“Guyanese citizens must be kept informed of issues relating to Guyana’s sovereignty,” he said at the forum held at the Critchlow Labour College, Woolford Avenue.

However, he added that “progressive forces in Venezuela must (also) be engaged to accept the legitimacy of Guyana’s position, to advocate an acceptance of the (International Court of Justice) ICJ’s anticipated ruling, as well as to promote an enabling environment for constructive bi-lateral engagement.”

The longstanding border controversy between the two countries escalated in 2015 when Guyana announced its first oil discovery offshore made by US oil major, ExxonMobil.

The case is currently at the International Court of Justice (ICJ) after the United Nations settlement efforts proved futile.

Also at the symposium was Guyana’s former Foreign Minister, Rasleigh Jackson who urged the country to remain steadfast in its’ fight for its’ territorial integrity, noting that “Diplomacy has always been our first line of defense.”

Recently, concerns have been raised about Venezuelan’s alliance with Russia after two Russian bombers landed in the Spanish-speaking country in December 2018. Concerns were further heightened when a Venezuelan naval vessel intercepted the research vessel – Ramform Tethys, which was conducting seismic work on behalf of ExxonMobil in the Stabroek Block on December 22, 2018 – one day after the Guyana Government was defeated in a motion of No-Confidence.

In justifying its actions, Venezuela had claimed that the incident occurred within its territory but Guyana has made it clear that the incursion was well within its EEZ. 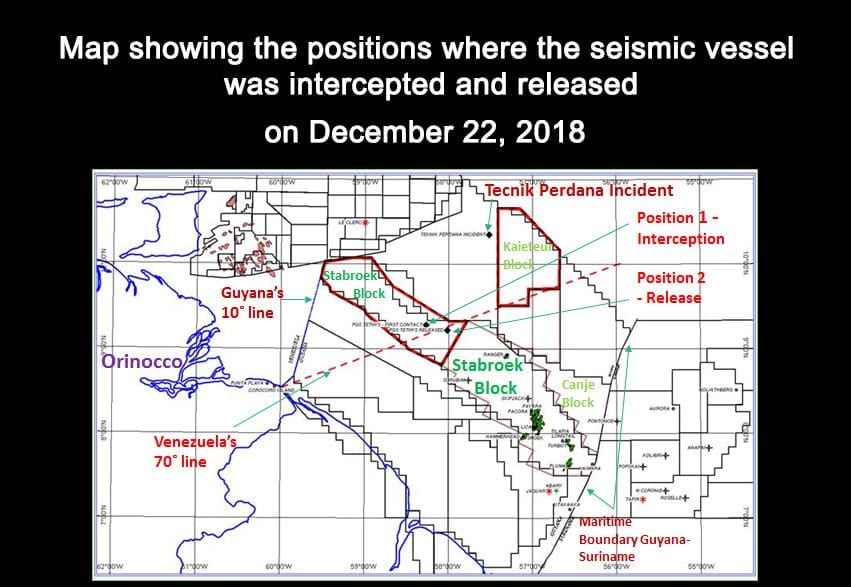 Greenidge noted that there is a framework in the international community for the handling of the border controversy and that is at the level of the ICJ where the case is currently being dealt with.

However, he noted that “Venezuela continues to refuse to respect that framework. We have to find a mechanism that will impose that on the parties because small states can only survive sensibly with a predictable framework of the rule of law.”

Venezuela had earlier opted out of participating in the proceedings at the ICJ on its longstanding border controversy with Guyana, stating that the court does not have jurisdiction to hear the matter.

However, the ICJ says written pleadings in the matter must first address the question of its jurisdiction. Guyana has filed its memorial in keeping with its November 19, 2018, deadline while Venezuela has up to April 18, 2019, to do so.