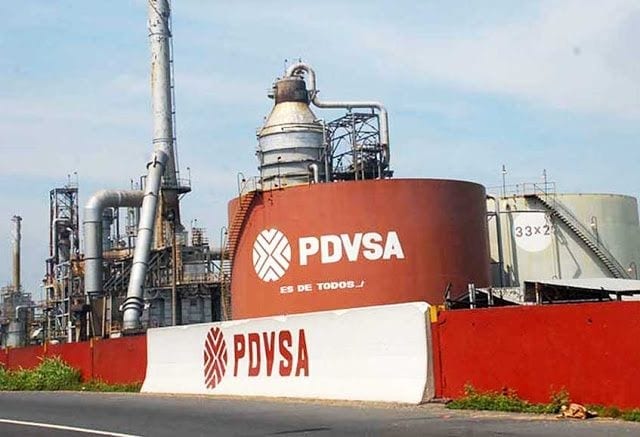 As Guyana prepares for first oil in 2020 from the Liza Phase 1 Development, and multiple additional projects on the horizon, with an estimated ramp up to 750,000 bpd by 2025, its western neighbor Venezuela, could see production drop to less than 700,000 bpd by next year.

Norway-based Rytsad Energy said in a February 11 report that Venezuela’s oil industry has been in a tailspin in recent years, with the country’s crude oil production falling from 2.4 million barrels per day (bpd) in 2015 to only 1.34 million bpd at the end of 2018. This freefall, Rysatad Energy said, is poised to carry over into 2019.

In the low case scenario, where the status-quo continues and Venezuela is unable to offset the effects of US sanctions and secure new financing, the country could see an additional 20% reduction in crude output this year, dropping to about 800,000 bpd, before sliding to 680,000 bpd in 2020.

Finally, Rystad Energy’s high case scenario considers the effects of a regime change in Venezuela, where US sanctions are lifted and new financing agreements are secured. Here the country is able to slow the downward trend, with crude production sliding to 1.11 million bpd this year and on to 1.06 million bpd in 2020.

One key factor is that Venezuela relies on imported diluents that are then mixed with the heavy crude produced from the Orinoco Belt in order to make the product marketable. Venezuela currently imports 60,000 bpd naphtha from the US, mainly from national oil company PDVSA’s US refining subsidiary, Citgo.

“Rystad Energy forecasts that some operators in Venezuela will run out of the crucial diluent by March. Without diluent, the current 200,000 bpd of heavy crude exports is at risk,” said Rystad Energy analyst Paola Rodriguez-Masiu.

Rystad Energy also forecasts what could happen in the case of a regime change that leads to the lifting of US sanctions and attracts new financing agreements.

Short term: Production will slow its downward trend. Fields in the Orinoco Belt, which are currently operating below capacity, will be relatively easy to rejuvenate. Further production increases become much more complicated as mature fields have reached their natural production decline and significant damage has been done to a large number of wells.

Mid-term: Arresting production declines and well damage in mature fields – which were the biggest contributors when Venezuelan production stood at more than 2 million bpd – will be a major challenge, both technically and financially. Therefore, to increase production Venezuela will have to further develop fields in the Orinoco Belt.

Long term: Rystad Energy does not expect to see growth on a massive scale, but does see significant upside potential over time. Venezuela sits on massive proven reserves. The cost structure is relatively low and exploration risk is minimum. Furthermore, the Orinoco Belt oil sands are less energy-intensive than the oil sands in Canada given Venezuela’s warmer climate, which means less energy is required to enable the heavy crude to flow. Finally, we expect demand for heavy oil to remain high despite potential carbon regulations and IMO 2020 restrictions on shipping fuel, as complex refineries such as those in the US could still process this type of crude in compliance with environmental regulations.

“This type of heavy crude is abundant in Venezuela and has no associated exploration risk. Further investments to process these reserves could therefore be justified,” Rodriguez-Masiu said.

Venezuelan oil exports fell by a third in 2019 as U.S. sanctions bit

Ring plundered $1.2 billion of Venezuelan oil money, laundered it in...