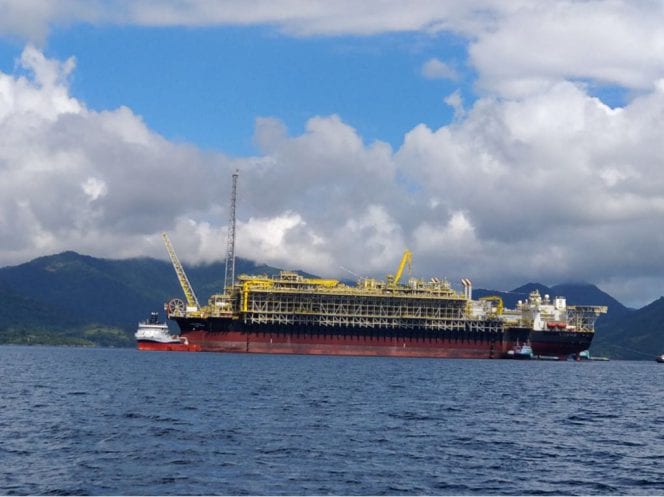 (Bloomberg) There’s enough as-yet-unassigned oil under the Atlantic Ocean off Brazil’s Rio de Janeiro to keep the entire world running for almost six months. So why is the crude just sitting there? A contract dispute between oil giant Petrobras and the government has been dragging on since 2013, and until it’s resolved, drillers can’t start targeting those deep-water deposits.

Money. Developing a region that’s as big as the U.S. state of Illinois will cost hundreds of billions of dollars. When Petrobras organized a $70 billion share sale in 2010 to raise cash, the government — intent on retaining control of Petrobras without having to spend money — traded the rights to produce up to 5 billion barrels from seven pre-salt blocks in exchange for $42.5 billion, almost all in new shares. Both parties agreed to revise the value of this so-called Transfer of Rights contract after the fields were declared commercial, to take into account changes in oil prices, development costs and oil production volumes. Petrobras and the government have been arguing over who owes how much to whom since 2013, through successive presidential administrations.

As oil prices retreated after 2013, expectations shifted from Petrobras owing money to the government to the company being owed reimbursement of as much as $14 billion, either in cash or in additional rights to undeveloped oil reserves. President Jair Bolsonaro’s administration is the third to grapple with the conflicting priorities inherent in the contract review. A large payout to Petrobras would expand the fiscal deficit. At the same time, the government wants Petrobras to have enough capital to invest in the oil industry, a key employer and source of tax revenue. The Bolsonaro administration has said resolving the contract is a priority. But the new economic team needs to review the wide range of estimates that the previous government was using, and a contract resolution may need approval from Brazil’s audit court to avoid any legal challenges.

Petrobras’ initial exploration at what’s known as the pre-salt fields uncovered a lot more oil than expected — an estimated 6 billion to 15 billion “surplus” barrels on top of the 5 billion that Petrobras has the rights to produce. (For comparison’s sake, the world consumes about 36 billion barrels of oil in a year.) The government plans to hold an auction for these areas to raise tens of billions of dollars — but it needs to conclude the contract review with Petrobras first. Bidding rounds for pre-salt fields outside of the Transfer of Rights area haven’t been affected and have drawn interest from international oil majors including Exxon Mobil Corp. and Royal Dutch Shell Plc.

Production from the pre-salt is already making Brazil one of the fastest-growing oil producers that’s not a member of the Organization of the Petroleum Exporting Countries. That means Brazil will become an ever-larger headache for OPEC as it tries to balance the global market. Brazil has already surpassed Mexico and Venezuela to become the largest Latin American oil producer, pumping almost as much as OPEC members Kuwait and United Arab Emirates. Growth is expected to accelerate in the coming years as Petrobras and other producers install additional production vessels at pre-salt fields.

Pre-salt oil was formed when the South American and African continents began separating more than 100 million years ago. The repeated flooding and evaporation of saltwater in what is now the South Atlantic created a layer of the mineral as thick as 2,000 meters that blankets the oil deposits. Pre-salt fields are deeper below the seabed than Brazil’s legacy oil fields.

Brazil’s pre-salt is the biggest group of conventional oil discoveries this century. The biggest field, Mero (formerly Libra), holds an estimated 8 to 12 billion barrels of recoverable reserves. The entire region probably holds more than 100 billion barrels of recoverable oil, according to an academic study. The Transfer of Rights area is just one 3,865-square-kilometer section of the pre-salt, and Petrobras is already producing oil there from the Buzios field. Production from the pre-salt has surged from nothing 10 years ago to more than half of Brazil’s total output, at 1.5 million barrels a day. While it is expensive to explore and develop these remote fields deep in the Atlantic, production per well is higher than at other deep-water regions such as the Gulf of Mexico or the North Sea, making them extremely profitable. The break-even oil price for the Mero field is $35 a barrel, according to Petrobras.

Petrobras to pay $2.95B in US settlement for ‘car wash’ corruption...

Price tag for Brazil oil blocks was too high – Petrobras...