Wood Mackenzie: What would a Joe Biden win mean for oil and gas?

Joe Biden is edging ahead in the race for the White House. The latest average of polls, as of 24 July, suggests that 50% of Americans would vote for Biden – a 9% lead over those who say they would back President Trump.

Much can change between now and the election in November. But Biden’s broader clean energy plans could be a watershed moment for US energy, and his agenda could have a profound and direct impact on offshore oil and gas production.

“Operators and the administration itself will need to think carefully about the implications of what could be one of the most far-reaching changes in the US offshore industry’s history.”

The most eye-catching of Biden’s proposals for the offshore industry is a promise to ban “new oil and gas permitting on public lands and waters.”

He also plans new protections for the Arctic National Wildlife Refuge and other areas President Trump has sought to open up for oil and gas development, including the eastern Gulf of Mexico (GoM).

How much does the oil and gas industry stand to lose if Biden’s policies are enacted?

Biden’s plans lack clarity: it’s unclear which permits would be included in his proposed ban. But by any definition, the impact on investment, production and tax revenues would be substantial.

How stringently the measures are applied – which could range from the least restrictive option of not awarding new exploration leases to the most draconian: putting a complete stop to oil and gas production – will be important.

The devil is in the detail: Biden’s proposed policies by the numbers

Each step towards tighter restrictions would wipe out tens of billions of dollars of capex.

So how do the numbers stack up?

In our base case, total remaining estimated capex is US$276 billion.

If no new leases are awarded under the least restrictive scenario, US$76 billion of that spending would be lost. And that would escalate if the measures were applied more stringently.

Nearly 25 billion boe is yet to be produced from the US GoM and Alaska. The least restrictive application of Biden’s policy – banning new leasing and drilling of exploration wells – would wipe out almost 12 billion boe of potential future production.

And in the worst case, shutting in all production would mean giving up that 25 billion boe in its entirety. 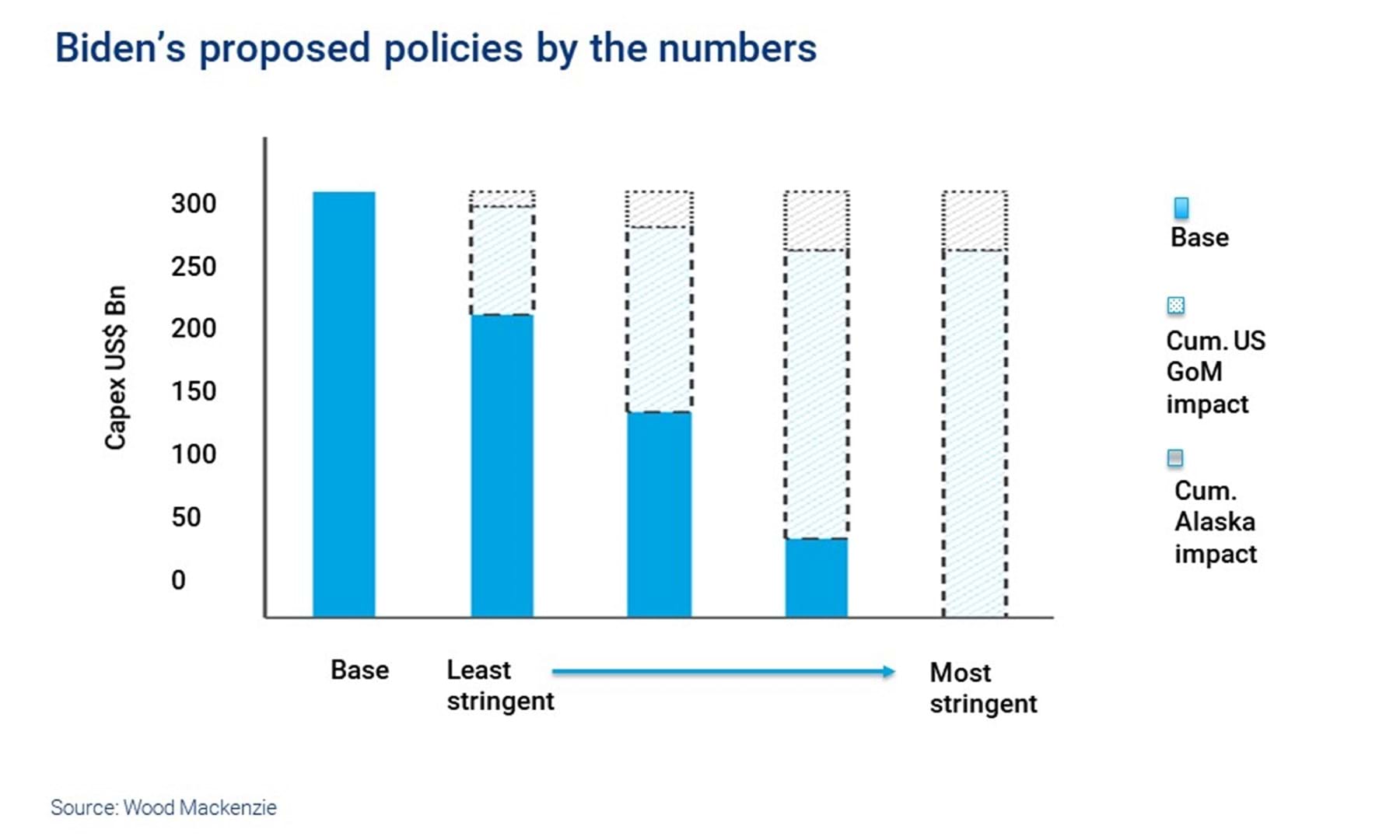 “Our estimates of the direct impact on oil and gas producers only just scratch the surface of the likely consequences for the wider energy industry. Midstream, refining, petrochemical and manufacturing sectors could all be hurt.”

The lost opportunity from future exploration is vast.

There are an estimated 9 billion boe of prospective resources in the US GoM. And there’s a further 2 billion boe in Alaska’s National Petroleum Reserve – which is very important for future development.

Explorers could miss out on US$20 billion of potential value. And government coffers would be US$135 billion lighter.

If production in the US GoM is shut in, this could be catastrophic: US$340 billion in revenue over the first ten years would be wiped out. Meanwhile, more than 1 billion barrels of economically viable reserves could be left in the ground in Alaska, which would dash hopes for sustained growth in the region.

And that could open the US government to potential legal challenges

Upstream producers have already sunk billions of dollars into exploration and development projects, the value of which could be eradicated.

In US GoM alone, companies have invested over US$180 billion since 2005, developing discoveries on the premise that they will be able to produce these resources.

State economies, like Alaska, are highly dependent on their oil and gas industries. Major losses as a result of policy change would have profound ramifications for economic health.

Biden’s proposals could bring about some of the most significant changes to the US offshore industry in its history. And that will need careful thought