OilNOWLatest News and Information from the Oil and Gas sector in Guyana
More
FeaturedNews
Updated: January 10, 2019 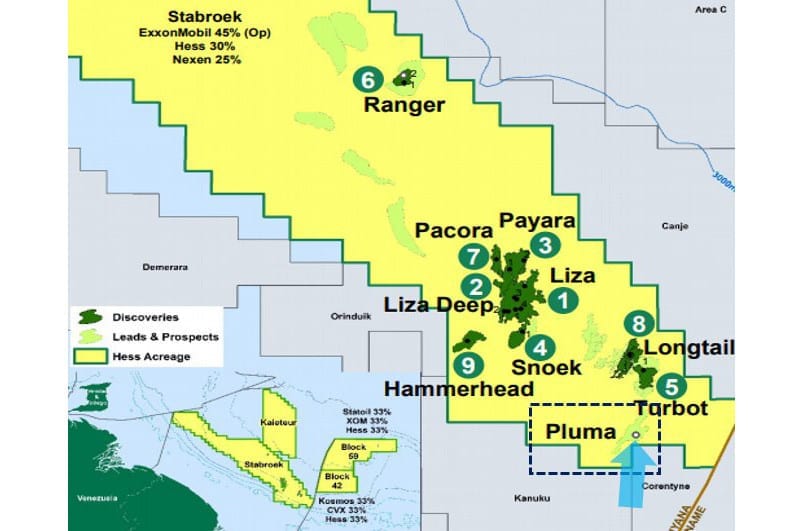 Industry analyst Wood Mackenzie estimates that ExxonMobil’s 10th discovery off the Guyana coast at the Pluma 1 well could add an additional 300 million barrels of oil to what is a rapidly growing resource base for the US oil major and its joint venture partners Hess and CNOOC Nexen.

In announcing the latest discovery on December 3, ExxonMobil said Pluma-1, which is located some 17 miles (27 kilometers) south of the Turbot-1 well, encountered approximately 121 feet (37 meters) of high-quality, hydrocarbon-bearing sandstone.

Julie Wilson, Research Director, Global Exploration at Wood Mackenzie, said Pluma, which is another cretaceous sandstone discovery, adds to the remarkable nature of the Stabroek Block where “twelve exploration wells have been drilled and only two of them have missed,” representing an incredible success rate of over 80 percent.

“Our preliminary estimate for Pluma is 300 million…It is a remarkable story and highly successful” she said.

Notwithstanding the record success, the analyst said more dry holes could be spudded as ExxonMobil drill more risker prospects on the 6.6 million acres block. “I expect them as well to target other Miocene prospects, particularly to try and test out how extensive that play is,” she added.

The US oil major said on January 7 that it had begun drilling the Haimara-1 exploration well which is located 19 miles (31 kilometers) east of the Pluma-1 discovery in the southeast Stabroek Block. A second wel – Tilapia-1 – located about three miles (five kilometers) west of the Longtail-1 discovery has also been spudded.

“We continue to prioritize high-potential prospects in close proximity to previous discoveries in order to establish opportunities for material and efficient development,” said Steve Greenlee, President of ExxonMobil Exploration Company.

The company also plans to deploy a seismic vessel operated by Petroleum Geo-Services (PGS) to the Turbot area to acquire 4-D seismic data similar to a 4-D campaign conducted in the Liza area in 2017.