OilNOWLatest News and Information from the Oil and Gas sector in Guyana
More
News
Updated: October 9, 2020

92% of all U.S. Gulf of Mexico oil production shut-in as Hurricane Delta swirls towards coast 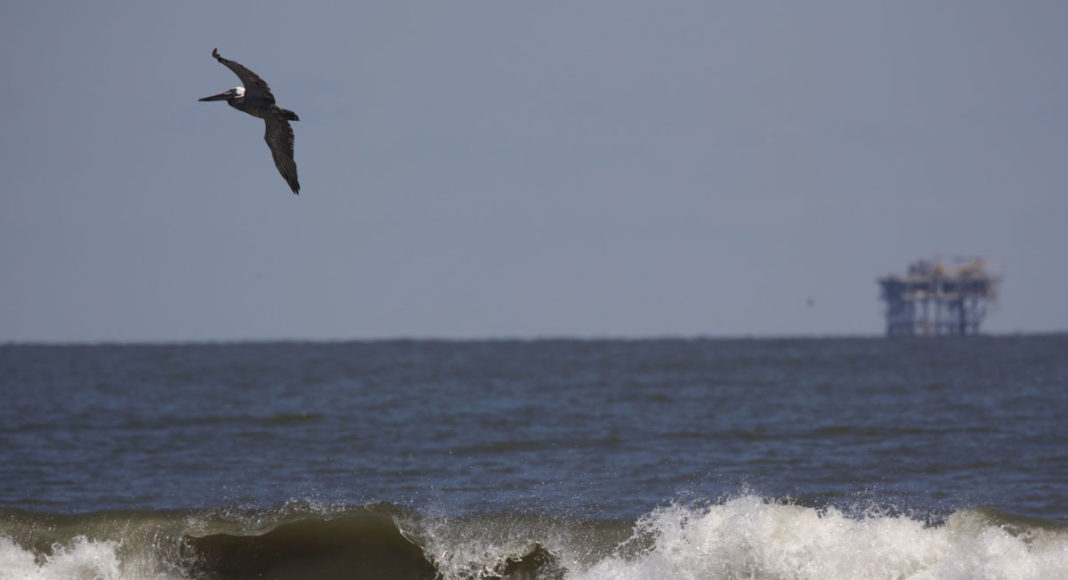 (S&P Global) Nearly 92% of all US Gulf of Mexico oil production remained shut in as Hurricane Delta moved toward the Louisiana Coast, according to the most recent federal statistics released Oct. 9.

But producers were already eyeing the return of crews over the weekend.

“Expected remobilization at this time is estimated for Saturday/Sunday,” or Oct. 11-12, BHP spokeswoman Judy Dane said.

Crude production currently shut in amounts to 1.69 million b/d, along with natural gas production of 1.68 Bcf/d, or 62% of the Gulf’s total, the US Bureau of Safety and Environmental Enforcement said in its daily storm bulletin.

That was essentially unchanged from Oct. 8, although gas shut ins were slightly higher from 1.67 Bcf/d Oct. 8.

On Oct. 9 a total of 274 platforms were shut-in, two more than the previous day.

The US Gulf of Mexico is home to roughly 1.9 million b/d of crude production capacity, according to the US Energy Information Administration.

Hurricane Delta at 1 p.m. Central time was still 80 miles south-southwest of Cameron, Louisiana, according to the National Hurricane Center. The storm was slated to make landfall later Oct. 9 as a Category 1 hurricane, with winds of 74-110 mph, NHC said.

It is then projected to downgrade to a tropical storm as it moves northeast through Louisiana early Oct. 10. Afterward it should weaken further to a tropical depression later that day as it moves through northern Mississippi and into Tennessee.

Gulf of Mexico producers Oct. 9 said they had already finished evacuating crews and shutting in production as the storm neared landfall.

Shell, BP and Chevron said they have shut in production at all of their operated Gulf platforms and facilities.

Shell has shut in production at all nine of its assets and has evacuated all personnel, and “paused” all drilling operations, the company said in an Oct. 9 statement.

Crude exports from Louisiana are feeling the impact as well. A LOOP spokesperson said Oct. 7 the offshore port’s marine terminal had suspended operations in advance of the storm.

ExxonMobil said it evacuated its Hoover platform in the Gulf.

Delta’s projected cone has narrowed from earlier in the week, putting fewer area refineries at risk. Of the four Louisiana refineries in Delta’s path Oct. 9, only Alon’s 80,000 b/d Krotz Springs plant was operating.

Citgo’s 418,000 b/d Lake Charles refinery, and Phillips 66’s 260,000 b/d Westlake refinery, both remained down because of power outages caused by Hurricane Laura in late August. Hurricane Delta might cause a delay in the return of those two plants, but refined products demand remains depressed by the ongoing coronavirus pandemic.

Other area refineries in Texas and Louisiana appeared to be operating normally Oct. 9.

With 25 named storms, 2020 is the second most active Atlantic hurricane season on record behind only the 2005 Atlantic hurricane season — which produced the legendary Hurricanes Katrina and Rita which devastated New Orleans and the Texas-Louisiana border region respectively. This year is also only the second tropical cyclone season to feature the Greek letter storm naming system, again after 2005.