OilNOWLatest News and Information from the Oil and Gas sector in Guyana
More
News
Updated: March 7, 2018 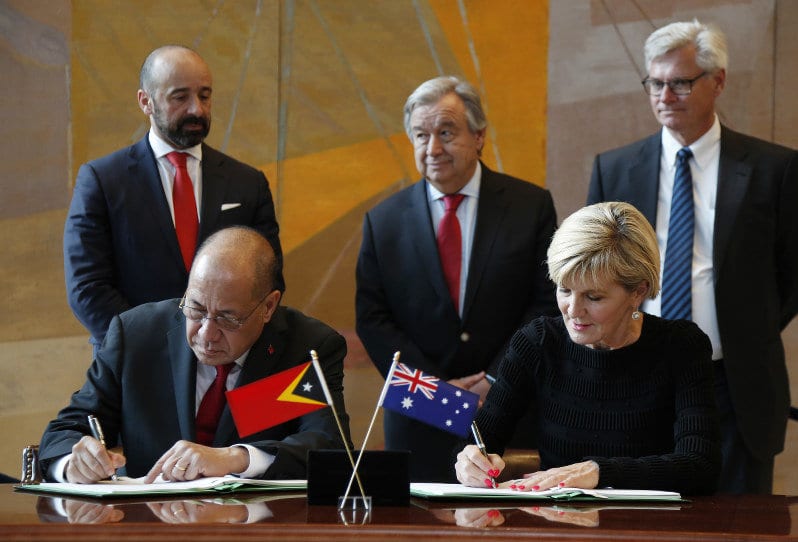 Australia and East Timor have signed an agreement that draws the first maritime border between the two nations.

It is hoped the deal, signed at the United Nations in New York, will end the bitter dispute over oil and gas reserves in the Timor Sea.

According to a ABC report, the two nations have agreed to split revenue from the Greater Sunrise oil and gas deposit, which lies between Australia and East Timor.

But there has been no agreement yet on where the gas and oil will be processed, and future negotiations on the subject could be difficult.

Australia has offered to give East Timor 80 per cent of the revenue if the oil and gas is piped to Darwin, while East Timor wants a 70 per cent share with the resources processed on its shores.

East Timor’s chief negotiator, former president Xanana Gusmao, has accused Australia of colluding with resource companies to ensure the resources are piped south to Darwin instead of north to East Timor.

The nation wants to build a processing hub on its southern coastline, but Australia is deeply sceptical about East Timor’s capacity to develop the plant.

Australia and East Timor have hailed the border agreement, saying in a joint statement that both nations “demonstrated good will and preparedness to compromise”.

“Both countries negotiated in good faith in order to achieve a treaty that Timor Leste, Australia and the [Conciliation] Commission believe is fair, balanced and consistent with international law,” the statement said.

But the fault lines running underneath the agreement are still clear.

Foreign Minister Julie Bishop said developing Greater Sunrise would “require the support of the private sector oil and gas joint venture companies whose capacity to develop and operate the project will depend on its economic viability”.

“It’s in our interest for Timor Leste to be a stable and prosperous neighbour, and that’s why we want to see a project developed that’s economically viable in the long term to deliver the maximum benefits,” she said.

The joint venture companies, led by energy giant Woodside, maintain that piping gas to East Timor is not economically viable, because the pipeline would have to cross a five-kilometre-deep undersea trench.

But Dili is standing by its plan. It is desperate to develop Greater Sunrise as quickly as possible, because East Timor remains heavily reliant on gas and oil revenue, and its existing fields are expected to run dry within a decade.

“These negotiations have been tough. They were not meant to be easy. And it was important to both Australia and Timor Leste to achieve successful results,” he said.