Of Disclosures and Confidentiality 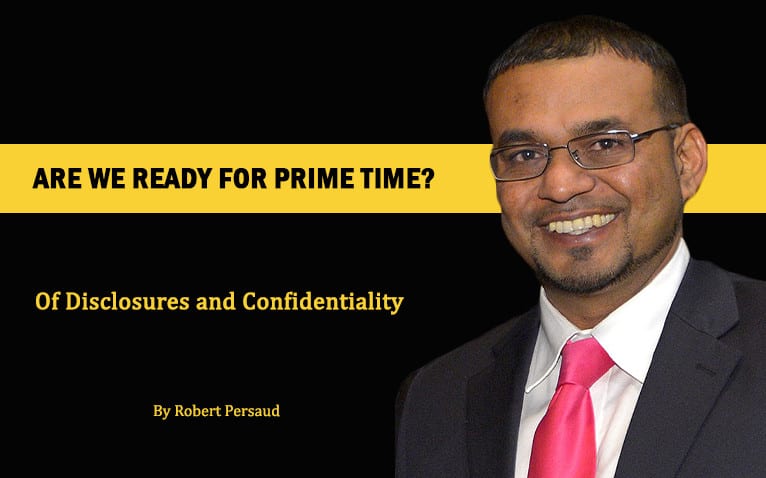 The public enjoys the right, not a privilege, to know about the decisions of its elected representatives and the government, which is acting on their behalf.  The exercise of this right is, however, circumscribed by a range of sensitive national interest issues. There are various tested and trusted models in established democracies, ranging from the USA to India, of how the balance between the need to know and necessary confidentiality is attained.

And so any decision to undertake an unbridled, wholesale release of the Production Sharing Agreement (PSA) and associated agreements entered into with ExxonMobil’s subsidiary – Esso Exploration and Production Guyana Limited – must be an instance in which a full impact/ramification of this decision is carefully and objectively examined.

It is unclear whether these documents will be disclosed in full or only those relevant sections based on legal considerations.  Whatever route is taken, I urge the exercise of great caution in making all these agreements to the public in full, at this time, for a number of reasons. My position has absolutely nothing to do with imperative of transparency, but rather the long-term interest of the Oil and Gas (O&G) sector and securing the country’s strategic national interest.

Many are tempted to join the bandwagon of condemning International Oil Companies (IOCs) by suggesting that their only modus operandi is only to cheat and rob countries they operate in (although there have been examples in the past of complete indiscretion by several of these companies in cohort with callous/corrupt governments).  Minus the political-hype and sensationalism, an objective appreciation of the way business is conducted, consistent with internationally accepted standards, will provide a better understanding of the complex nature of these negotiations and the need for an appreciative degree of confidentiality for a defined period.

Mind you, I am not blind to the perception of what is not known or made public, in a less than timely manner, is usually due to some ulterior motives. Suspicions abound when there is a lack of clarity and logical explanations (and the recent ExxonMobil Signing Bonus revelation is a good example). And, yes, there must be timely updates when confidentiality or national interests matters aren’t at stake so as to inspire trust.

But we are now getting into the major league, a big O&G player, in these parts and our discourse must not be dictated by the sexy headlines and the vested interest/advisors’ pronouncements to lead us either in one direction or another.

Why am I taking this seemingly ‘politically incorrect’ position? There are two main compelling reasons:

Firstly, we have a number of IOCs, at varying stages, exploring and developing our offshore basin, which is rich in hydrocarbon resources. The basin has been significantly de-risked with the Liza world-class oil discovery. We have only concluded one PSA with a specific operator for a defined area; there could possibly be another half of a dozen IOCs, in the coming years, negotiating and signing PSAs. Wouldn’t the full disclosure of the first PSA impair our negotiating ability with others as we seek the best agreements for the people of Guyana? The future companies, armed with the existing PSA, can use it as a reference level for their negotiations thus inhibiting this and future governments’ leverage to extract the best terms and conditions for our hydrocarbon resources.

Secondly, we have an on-going border controversy with Venezuela that directly affects our nation’s ability to fully develop resources in our internationally recognised territory. Venezuela’s claim, based on a dead man’s letter, is indecently weak and only kept alive because of its ability to be militarily aggressive and the historical Cold War machinations in this region. So weak and ridiculous is our neighbour to the West claim on our territory that it would cling to an iota of information it sees ‘helpful’ to further obstruct an early resolution of the matter. These discussions under the UN Good Officer Process are entering a very crucial phase and it should not be distracted by any action on our part.

So what can we do to achieve a balance between disclosure and rational confidentiality in the interest of the nation, but at the same time create a climate of trust?

It does the country no good if investors and companies feel unwelcomed due to a hostile environment polluted by baseless suspicions and engineered sensationalism and misinformation. We are developing a new sector and it is a learning process for many stakeholders and all must contribute to a climate of trust.

Let’s be reminded that we are witnessing the early wave of activities and investments, directly and indirectly, relating to O&G sector. How we manage today will have an impact on the best arrangements for today and future generations.