OilNOWLatest News and Information from the Oil and Gas sector in Guyana
More
NewsRegional
Updated: February 6, 2018 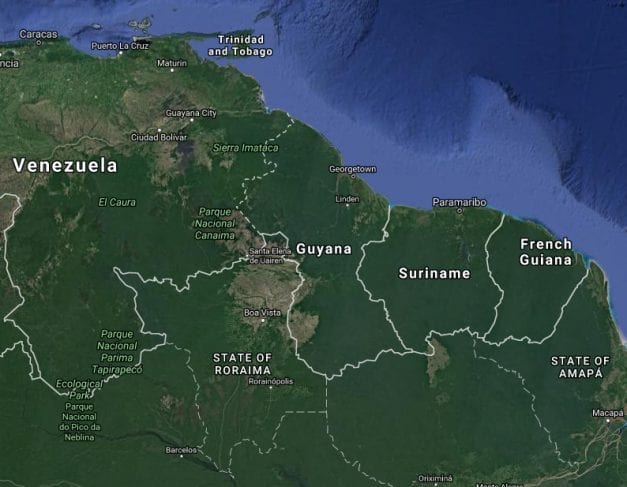 A legal team of advisors at Guyana’s Ministry of Foreign Affairs, International Relations and Co-operations, is currently finalizing its report charting a roadmap for the Cabinet Counsel of Minister’s consideration this week.

This, as the South American nation prepares to mount its legal defense at the International Court of Justice (ICJ) in the Hague, against neighbouring oil giant Venezuela.

The country’s Vice President and Minister of Foreign Affairs, Carl Greenidge, on Monday briefed journalists on the sidelines of the opening of National Consultative meeting on Migration held at the Guyana Pegasus.

The move on the part of the Guyanese government comes in wake of a decision by United Nations Secretary General, Antonio Guterres —in his capacity as the UN’s mediating ‘Good Officer’ in the Guyana/Venezuela row—to refer the matter to the ICJ.

Vice President Greenidge told reporters, the Ministry of Foreign Affairs’ advisory team and its lawyers worked through the weekend into Sunday evening and have since mapped out a course of action on the ‘broad options’ available to the country.

He cautioned of the preliminary nature, seeking to point out that there would be areas that will require the full decision making and policy guidance of the Cabinet Counsel of Ministers.

According to Vice President Greenidge, while the country would have been preparing, “for this event it is not straightforward and we could not anticipate all the options that the SG (Secretary General) could have identified.”

An example of the country’s preparation for the decision to have the matter taken before the ICJ is the deposit of US$18M as legal and other fees which it had received as a signing bonus from ExxonMobil Guyana in 2016.

The Guyanese Vice President told reporters, while the decision on the part of the Secretary General, is the clearest and most unambiguous he could have taken, it is “one that will take time” since according to him, the Guyana Government still has to first decide on how it will approach the court.

A process, which in itself, still requires even further consultations with the UN itself, Greenidge said.
He assured members of the Guyanese media the immediate work has already begun, “so in the course of the week that report will be presented to the Cabinet which will be asked to make some decisions.”

Seeking to provide some clarity on Guyana’s request of the ICJ for a pronouncement on the validity of the 1899 Tribunal Ruling, Vice President Greenidge was adamant, “we are not setting out in the court to get to the court to go now and mark boundaries, that’s not the issue…the issue is simply an allegation made by the Venezuelans in 1962, that a treaty that they had honoured for 61 years is null and void.”

He told reporters that Guyana’s concerns were conveyed to United Nations that this Venezuelan allegation has been a shadow cast over the country’s national development for the past 50 years; a situation that would remain unchanged if not resolved.

“If a country (such as Venezuela) says that this (1899) treaty is not valid, the appropriate body to decide on the validity is the Court. Once the Court pronounces on that, it solves our problem as regards perception and other people’s understanding of our rights and of our borders and our sovereignty and so forth,” he said.

The seasoned politician was quick to dismiss speculations over Venezuela’s likelihood of not abiding with any ICJ determination saying, “It’s not for a country to decide unilaterally its obligations and what are the world’s obligations.”

According to the Guyanese Vice President, “you are in a community, you are not in an island as a country, you can say whatever you like but you cannot pronounce on the law which is an international one.”

Vice President Greenidge was adamant the law in question is “not a Venezuelan law or a Guyanese law, it is an international treaty and you are obliged under the UN framework itself to honour treaty obligations and to honour the international law.”

The border row between the South American nations reignited following Guyana’s independence from British Guyana in 1966 challenging the legality of the 1899 Arbitral Tribunal ruling that led to the demarcation of the two countries boundaries.

The United Nation’s Secretary General in his recent decision said that the ‘Good Offices’ process had been exhausted since no amicable settlement could be reached.

Spokesman for the Secretary-General, Stéphane Dujarric, in making the announcement recently had said “The Secretary-General, in accordance with the principles of the United Nations, remains committed to these States as they seek to overcome their differences regarding this border dispute.”