OilNOWLatest News and Information from the Oil and Gas sector in Guyana
More
ExplorationFeaturedNews
Updated: February 14, 2019 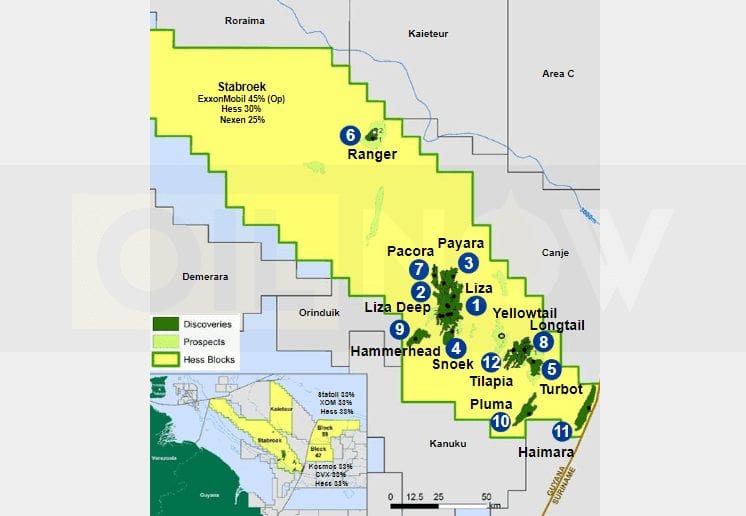 The two most recent discoveries on Guyana’s prolific Stabroek Block is particularly significant since one represents the highest net pay count found to date and the other the first gas discovery announced by the ExxonMobil-led consortium of Hess and CNOOC. The discoveries were announced on February 6.

Tilapia is located approximately 3.4 miles (5.5 kilometers) west of the Longtail-1 well. Longtail-1 was the 8th discovery made on the block, announced back in June 2018.

The Haimara-1 well, which encountered approximately 207 feet (63 meters) of high-quality, gas-condensate bearing sandstone reservoir, is the first of its kind to be announced by the consortium. ExxonMobil Guyana Senior Director, Public and Government Affairs, Deedra Moe, told OilNOW, “It’s going to take some time to further evaluate in terms of what we would want to do potentially with that area.”

A total of 12 discoveries on the 6.6 million acres Stabroek Block have been announced so far by the consortium, amounting to more than 5 billion barrels of oil equivalent. “We continue to see multi-billion barrels of future exploration potential remaining,” says Hess.

First oil for Guyana is expected by 2020 with the Liza Phase 1 development at a peak rate of 120,000 bpd. A total of 5 developments could be underway by 2025, producing well in excess of 750,000 bpd making the South American country a significant new producer in the region.